The Cunard Building attracts me for a variety of reasons. As a professional tour guide, I look at big cruise ships all week long, especially during September and October. Although they dock at the Flynn Cruiseport/Black Falcon Terminal in the Seaport, a reminder of the old steam-powered ocean liners exists in downtown Boston. 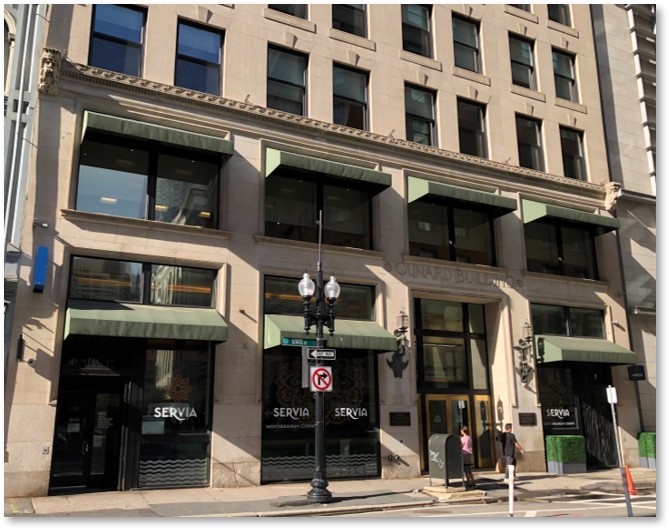 State Street once connected the Old State House to Long Wharf, which was built in 1710. Starting back when it was called King Street, this thoroughfare served as Boston’s link to the harbor and thus the seas that carried goods to and from the city.

Although that link has faded, the Cunard Building, which once housed the offices of a great steamship company still exists on State Street 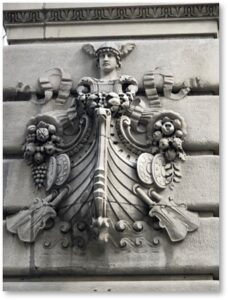 In the nineteenth century, British postal authorities sought a fast mail route to North America and selected Boston as the terminus for service from Liverpool. Samuel Cunard’s company sent its first vessel, the Unicorn, on the 14-day voyage to Boston in June of 1840. This decision highlighted Boston’s emergence as a city of commercial and cultural significance in a nation that was then only 64 years old.

The Cunard Line did not extend mail service to New York until eight years later. (Even then, Bostonians saw this triumph over New York as a great coup that was very popular in the city.)

Why did Samuel Cunard choose Boston instead of New York City? Long Wharf assured the company of deep-water mooring for their ships. Its planners designed Long Wharf  to run “from Andrew Faneuil’s corner to low water, to be of the width of King Street.”

That established the connection between street and wharf right from the beginning. A straight visual link from State House to harbor existed until the elevated Southeast Expressway broke it in the fifties. History records, however, that the Cunard Line steamers docked at the East Boston wharves. 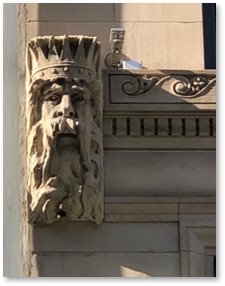 The Boston architectural firm of Peabody and Stearns designed the six-story Cunard Building at 126 State Street in the classical revival style in 1901. It housed the offices of the Cunard Line when that company pioneered transatlantic steamship service to the United States.

The Cunard Building still displays symbols of the sea and of the Royal Admiralty both inside and out. Take a moment to step back across the street (check for traffic first) and find them all.

Look up over the front door and you will see a long model of the ocean liner Servia in a glass case. It provides an additional connection to the building’s Cunard Line history.

The Cunard Line launched the Servia 1881 and it was the second largest ship of its day at 515 feet. They used steel to construct the twin-funnel ocean liner because it was a lighter and stronger material than iron and wood. The Servia also pioneered the extensive use of electric incandescent lamps.

The Cunard Museum in Liverpool, England, presented this engineer’s ship model to the Cunard Building in 2015 to commemorate the company’s 175th anniversary. 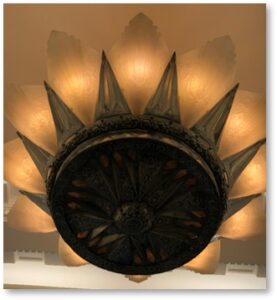 Because the Cunard Building is now a residential property, the front door remains locked. But if you look respectable and linger outside you might catch someone who will hold the door for you. The vestibule provides a much better view of the Servia model, one not obscured by the glare in the glass over the front door. It worked for me.

Also, look up at the chandelier in the vestibule. It looks like a sunflower.

A restaurant named for the Servia occupies the left side of the building’s ground floor. Servia offers modern Mediterranean cuisine.

Directions to the Cunard Building 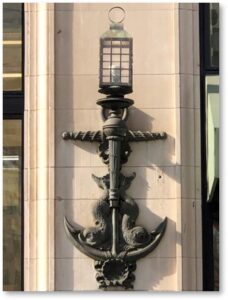 You can approach the Cunard Building either from the waterfront or from downtown. Servia Boston provides detailed directions on its web page: Contact – Servia Restaurant (serviaboston.com)

Parking: Check one of the parking apps for the best place to stash your car. I recommend using the Boston Market Garage. If you buy something tasty at the market before you leave and get your parking sticker stamped, it reduces the price considerably. After you park, just walk up Congress Street toward the Old State House, then turn left on State Street.