There are people who pride themselves on never “wasting time” watching television. Others take advantage of the many educational programs on TV to learn new things. Shows like NOVA, Planet Earth, Through the Wormhole, Cosmos: A Spacetime Odyssey, and Life, can tell you much about our world as well as the universe beyond it. I admit that I enjoy watching Ancient Aliens because almost every episode shows me a place on planet Earth that I never knew existed: Puma Punku, in Bolivia or Mohenjo-Daro in Pakistan, for example.

More entertainment-focused TV shows often include subliminal messages that slide through the screen unnamed and unacknowledged. Some of them are downright silly while others can be dangerous. Some concern real things while others deal with fictional tropes. Sometimes it’s fun to step back and look at these messages for what they can tell us about our society, our culture, and—most of all—the mindset of television scriptwriters.

Here are 10 things that TV taught me over the years arranged in no particular order.

The FBI, in particular, is tarred by this brush. They often act dumber than a stump, unable to pull basic evidence together or think one step ahead of the bad guy. They let interdepartmental rivalry tie their hands by obscuring important evidence. They insist on believing only the most obvious facts while dismissing anything else even if it might help them solve the case and get the killer off the streets. This message is demeaning to our law enforcement agencies and condescends to the viewer. It could even encourage a viewer to commit a crime because he believes that he’ll never be caught by the bumbling law enforcement agents he sees on TV.

NFL football is the most frequent offender in this regard, of course, but it’s not the only one. I have seen 60 Minutes delayed by golf, tennis and soccer as well. It’s not like these programs share an audience demographic so there’s no lead-in from one to the other. The message is clearly that a sporting event—any sporting event—is more important to CBS than one of its most successful news programs. Go figure.

When humans go out to eat, do we throw food on the restaurant walls? Do we stick our faces in the plate and come up covered with Bordelaise sauce and mashed potatoes? Do we walk out of the restaurant with shirts soaked in spaghetti sauce or salad dressing? No, of course not. That’s because (A) we have table manners; and (B) we paid a lot of money for that food and we want to actually, you know, eat it. I would expect vampires to feel the same way about blood which is usually a lot harder to come by than dinner in a restaurant.

The original, classic Star Trek became a cultural phenomenon largely because its scripts were written by real science fiction authors such as David Gerrold, Theodore Sturgeon, D.C. Fontana and Norman Spinrad. These authors used the episodes they wrote to deal with important issues of the day but placed them in alien environments. The writers used wit, metaphor, parable, inference,humor,  and other devices to get an often-difficult message across in a way that viewers would accept.

The writers of Star Trek spinoffs were not science fiction authors or even very creative. A lot of times they phoned it in. Instead of doing a little research or even just making something up, they would describe whatever they were seeing as “some sort of.” So instead of a specific type of nebula, force field, shielding device, weapon, or radiation that was based at least in part on science, we hear the vague description, “some sort of force field.” It’s cheap and lazy and it has spread across television like verbal Ebola. Now I hear this unfortunate phrase on programs of every type and genre.

BTW: When Rick Berman left Deep Space Nine to inflict his mundanities on Star Trek Voyager, Ira Steven Behr took over DS9 and turned into one of the best, most exciting science fiction programs on television. By then, however, most of the audience had already left. If you get a chance, check out the last season of DS9 and you’ll see some great science fiction. 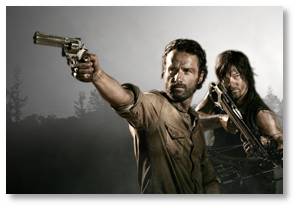 It annoys me, for example, to see characters trying to stop zombies with guns. Here’s the thing about zombies: they’re already dead. You can’t kill them again, you can only stop them and the only way to stop a zombie with a gun — unless you have bullets made of Valyrian steel or dragon glass — is to shoot it in the head. That’s a tough shot to make, especially when your target is lurching wildly in your direction. Or you have to get so up close and personal that the zombie can reach your brains first. Ick.

Me, I’d opt for a flamethrower, at least at a distance. That wouldn’t stop them either, at least not right away, but it would make it easier for me to escape because the flames would keep them from seeing me run. Guns would also not be my weapon of choice for fighting vampires—strigoi or otherwise—insects, nanites, replicants or any other opponent that’s too small, too fast, or too dead for bullets to affect them. I would prefer fewer guns and more creativity.

Those are the ten lessons for today. If you have any others, please feel free to Comment on this post. I’d love to see them.