“Sell Me this Pen” ~ Jordan Belfort,
The Wolf of Wall Street 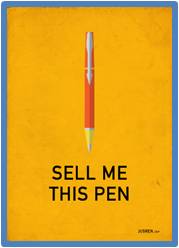 Leonardo DiCaprio played former stockbroker Jordan Belfort in the movie version of The Wolf of Wall Street.  Belfort got rich running a stock brokerage operation in the 90s that defrauded his customers of nearly $200 million. When it ultimately crashed, he was convicted of stock-market manipulation and running a boiler room as part of a penny-stock scam. He testified against his partners and subordinates, served 22 months in prison, then published the memoir and became a motivational speaker. It’s the Criminal’s American Dream.

In the movie, DiCaprio talks about how everyone wants to get rich, capitalizing on people’s natural greed. In the now famous scene, he takes a pen out of his pocket, hands it to one of his new recruits, and challenges him to sell me this pen. The man takes his pen, then asks him to write his name down on a napkin. He can’t, because he no longer has a pen.

It’s Not About the Pen

According to Jordan Belfort, it was a trick question to distinguish between amateur and real sales talent. I didn’t believe anyone really used it but some sales managers consider it a litmus test and no candidate worth his or her sales salt goes in unprepared. Even if the question isn’t asked, only a fool fails to practice an answer.

It’s a simple question with a complex answer because it’s not about the pen. For what it’s worth I think it’s a stupid question, second only to, “Why is a manhole round?”  Even if you’re going into sales, these questions strike me as unoriginal.  There are better and more revealing questions to assess a person’s talent and abilities and these have been overdone.

In high tech, sales cycles are lengthy and extremely competitive. The pen metaphor overlooks many necessary skills, but captures a critical one: success hinges on the ability to identify the need, provide the solution and close the deal. But those skills are built on a strong foundation of market research, competitive and technical knowledge, and industry experience.

The Art of the Deal

I have profound respect for the sales teams I work with. I have observed them with customers and prospects; they are the best at what they do. The team combines extensive knowledge with a genuine respect for their buyer. Therein lies the key. 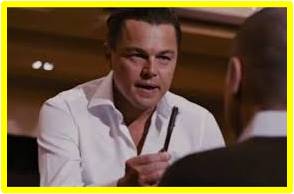 Before a single conversation takes place they investigate the prospect’s roles, responsibilities, and objectives. Researching a company is also critical. Sales success is about connecting, yet it’s an overlooked skill.

Negotiating and closing only happen after a human connection is established. Winning sales teams go in knowing what they need to know to close business.

The real starting point of any sales transaction is to know who you are selling to and understand what’s in it for the buyer.  Skilled sales people know and appreciate the value propositions of their competitors and the objections they face. Understanding them separates them from the incumbent and identifies what they need to dislodge and break existing purchasing patterns. In our industry, displacing/replacing an incumbent is hard work.

Only the Strong Survive

My sales teams understand one very important fact—it is never about them.  It is always and only about the people sitting across from them because that’s who they’re really working for. A successful sale pivots on their ability to help the prospects achieve their goals. Knowing your customer, stakeholder, or audience is the foundation of any sales win.

Equally important is to know everything about whatever it is you are selling, and you must know it cold. Whether it’s an idea, a product, or a plan; know it inside out and better than anyone else, even the people you’re selling to.

Due to the nature of today’s business, sales cycles are longer and buyers are better informed. When it comes to deciding, most people have a difficult time doing something different. A potential customer can agree with everything you say and still not budge, believing they have too much invested in an existing solution.

In my industry the buyer only parts with money once they are certain it will not come back to bite them from higher levels of the organization. The sales team moves them in a direction they haven’t thought about, with the goal of making them think it was their idea all along.

Selling the pen is never about the pen but it’s still a common misconception.  If the pen is the item being sold…well then, it must be about the pen. When sales blood runs in your veins you get it, understanding it’s about the need, not the product. 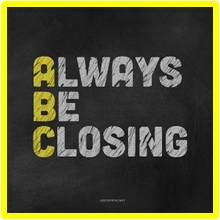 Unfortunately, most people aren’t born with the sales gene, myself included, and selling has gotten a bad rap. The sleazy sales pitch is something all of us have lived through. Think cars. But the sell me this pen method has cred, especially when it’s executed well.

One sales executive used a riff on this approach, handing the interviewee his sunglasses with an invitation to sell them back to him. This astute candidate recognized it is never about the item, it’s about creating necessity.

He began by asking the interviewer if he needed sunglasses and his response was, “No and I’m not in the market for any.”  The candidate then picked up his cell phone, turned on the flashlight and, shining it directly in the interviewer’s eyes said, “How about now?”