Last month a clip went around Twitter that showed people on a terrace in Switzerland watching as an avalanche begins roaring down the mountain. 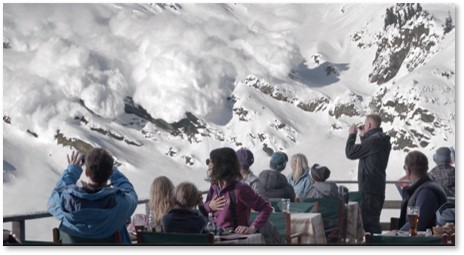 A family is eating lunch when they hear what sounds like a gunshot. “Isn’t that an avalanche?” the mother asks. “Yes, but it’s controlled,” the father replies as he raises his camera to take pictures.

“Look at that power,” the father gushes as snow barrels down the mountain. “Is it safe?” the mom asks. “Sure, they really know what they’re doing,” he assures her. One of the kids, presumably the smart one, says, “It doesn’t look controlled to me.”

That’s when panic starts as the diners realize this thing might really be dangerous. People start getting up. Screaming diners bolt for the inside and the snow surges onto the terrace. 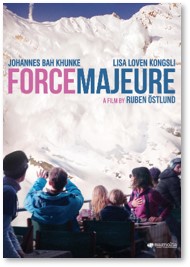 But it’s not real.

The clip actually comes from a Swedish movie called Force Majeure that deals with how “A man’s selfish reaction to the danger posed by an avalanche causes cracks in his marriage and relationships with his children.”

Someone posted it on Twitter to illustrate “the way America is reacting to global warming.”

We can learn two things from this:

Point Number One speaks for itself. To support Point Number 2, I offer this very real clip from July of this year. It shows a wedding party in Hawaii watching as a very large wave sweeps toward shore.

The wedding guests turns toward the ocean to watch as the blue-green comber curls in. A man says, “It’s coming over. I’m pretty sure.” But no one moves to get out of the way.

Fortunately, the giant swell did no real damage to the wedding reception, although it did sweep right over the roofs of homes elsewhere on the island.

My point, however, is that in both cases, the people affected don’t seem to realize that they could be in real danger. Okay, the first clip came from a movie but it was so believable on Twitter because diminishing a disaster and its danger is exactly how many people react.

Most people seem to think that disasters are something that you see only on TV or movie screens—they don’t happen to real people. They react accordingly, just watching, taking videos, and exclaiming over the power of nature.

The same thing happened in Indonesia when the big tsunami hit in 2018.  As a tsunami approaches land, it draws the water toward it. For people on the beach, it seems as if the tide is going out abruptly and way past where it would usually fall.

This presents a warning of pending disaster: Red Alert! Run for high ground! Instead, people were drawn to the beach to watch the unusually low water. Some even walked out onto the newly dry ground without a thought as to what would happen when all that water came rushing back. 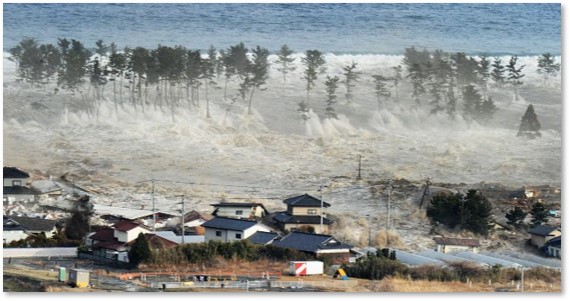 My father, who read both Popular Science and Popular Mechanics, once told us about the phenomenon of rapidly receding water. “If you see that happen,” he said, “run as far as you can and get as high as you can.”

Most people don’t have a father as interested in how things work as our dad, the engineer, so they would never have heard this warning. Even more important, however, is that people don’t seem to think. They see unusual events as interesting, Instagrammable, something to tell their friends about. They don’t think they are in real danger and respond accordingly.

The Survival Arc for Disaster

In her excellent book, “The Unthinkable,” Amada Ripley describes several what she calls the survival arc, which has three phases:

What we saw in both of these clips was Denial. After all, you don’t have to act if nothing is actually wrong. As Ms. Ripley states,

“We have a tendency to believe that everything is OK because, well, it almost always has been before. Psychologists call this tendence ‘normalcy bias.’ The human brain works by identifying patterns. It uses information from the past to understand what is happening in the present and to anticipate the future.  This works elegantly in most situations. But we inevitably see patterns where they don’t exist. In other words, we are slow to recognize exceptions.”

Everything Will Be Fine

When we go to a wedding or on vacation, we don’t expect something abnormal to happen to us. The normalcy bias tells us we should relax. We’re there to have a good time and everything will be fine.

I think of this when I see people board an airplane wearing flip flops. I wonder how they would feel about running through burning jet fuel in flip flops. (Okay, I know most people don’t’ think this way.)

But anticipating that things will not always go as planned actually helps train the brain to deal with the unusual and the dangerous.  As Laurence Gonzales tells us in “Deep Survival,”

“Since emotions are designed to elicit behaviors in a split second, clearly, that is a tall order, and some people are much better at it than others. In addition, there is a wide variation in individual reactions. Some people startle easily. Others tend not to react at all. Some people function better under stress, such as professional golfers, fighter pilots, elite mountain climbers, motorcycle racers, and brain surgeons. And some emotional responses are more easily controlled than others.”

My point, and I do have one, is that too many people go through life unprepared to deal with the unusual, the unknown, and the dangerous. The watch when they should think and then act. Don’t’ be one of them. If you see something bad about to happen, don’t worry about what other people are doing. Take action and do what needs to be done to stay alive. Even if you’re on vacation.