Skip to primary content
Skip to secondary content
There are heist movies and there are magic movies. Now You See Me purports to bring these two genres together and actually succeeds—but not in the way the film’s makers intended.  Our first movie choice for the weekend would have been After Earth but that changed when critical reviews dumped on it for reasons that worried me a week ago. Although the reviews for Now You See Me weren’t much better—44% rotten and a 75% “Audience Liked It” score on Rotten Tomatoes—they beat After Earth’s miserable 12% rotten and 54% ALI score. Besides, the cast was much better. I’d rather watch Michael Caine phone it in (he doesn’t) than Jaden Smith stumble through a role that’s too big for him. Which is not to say that we didn’t enjoy Now You See Me. 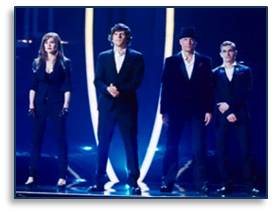 In classic magic tradition, Now You See Me distracts the viewer. It does so not with a gorgeous assistant or spectacular props—although it has those—but with superb actors giving excellent performances. While the audience watches the magicians do their thing, and listens to Morgan Freeman explain just how they do it, the movie performs its cinematic sleight of hand, making us believe that we are seeing an intriguing puzzle embedded in a real story.  Enough is going on throughout the movie to convince us that a complex story arc is playing out and it will end with a satisfactory denouement.

Thus the audience stays involved in the action and intrigued by learning how some seemingly complicated magic acts really work. There’s also pleasure in watching the excellent cast do their thing. So we start immediately to work out the solution and figure out who the man behind the curtain might be. Deciding what’s real and what’s illusion is enough to keep us going for quite some time and there are places where we grasp what illusion is being used before the FBI and Interpol figure it out—or so we think.  Then the movie ends and (Presto! Chango!) we realize that nothing we’ve seen so far makes any sense. Instead of “Oh my God!” or “That’s incredible!” we scratch our heads and say “Wait. What?!?”  The heist part came first, of course, when we paid for the tickets.What a disappointment that ending is. Instead of talking about the subtle nuances of the movie as we drove home, we just shook our heads at what we had been expected to believe and accept. It was like going to see David Copperfield or Lance Burton and having the show wrap up with a cheesy card trick. This is what happens when five people have writing credits.

Trick at the End

Oh, and by the way, there’s another trick at the end; the carousel that is supposed to be in Central Park is not the Central Park carousel. That’s not really a surprise because when the script calls for one, they usually shoot the Santa Monica Pier carousel (Philadelphia Toboggan Company #62) or the one in Griffith Park (Spillman Engineering). The carousel in the movie was not the big Stein & Goldstein ride that operates near the Central Park Zoo. 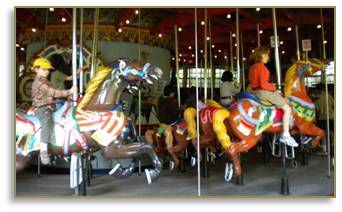 That one has no “menagerie animals” on it, just horses—and what beasts they are. Stein & Goldstein horses are big and fierce, with wild eyes, laid-back ears and open mouths with bared teeth.  Many are covered with elaborate medieval armor.  They’re actually kind of scary for little kids.

And the horses on the Central Park carousel, built in 1908, are enormous, arguably the largest ones they ever carved. The horses in the outside row are the size of actual horses. Most people wouldn’t know the difference or care but I love these old hand-carved carousel animals and I always perk up when I see one in the movies.

I suppose we could call swapping out one whole carousel for another a magic trick worthy of David Copperfield—but all they had to do was film a different machine somewhere else and call it Central Park. Now You See Me was just disappointing all around.