When it comes to Boston’s street names, you just never know. While Beacon Hill’s streets got their names from the trees on the Rev. William Blackstone’s farm, the provenance of others is not so clear. Joy Street, for example, was not named for great happiness, neither was Friend Street named for someone’s BFF. Many, from Adams to Wigglesworth, carry the names of people, almost always Puritan men and their well-to-do descendants. The Massachusett Indian tribe that occupied the Shawmut Peninsula had their own trails around the hills and coves, but they didn’t name them in the same way.

One particular intersection of two streets has always intrigued me, though. Somerset Street meets Sudbury Street at Cambridge Street. Why do I like it? Because I grew up in Somerset, MA, and lived for 37 years in Sudbury, MA. The intersection thus connects two big phases of my life. 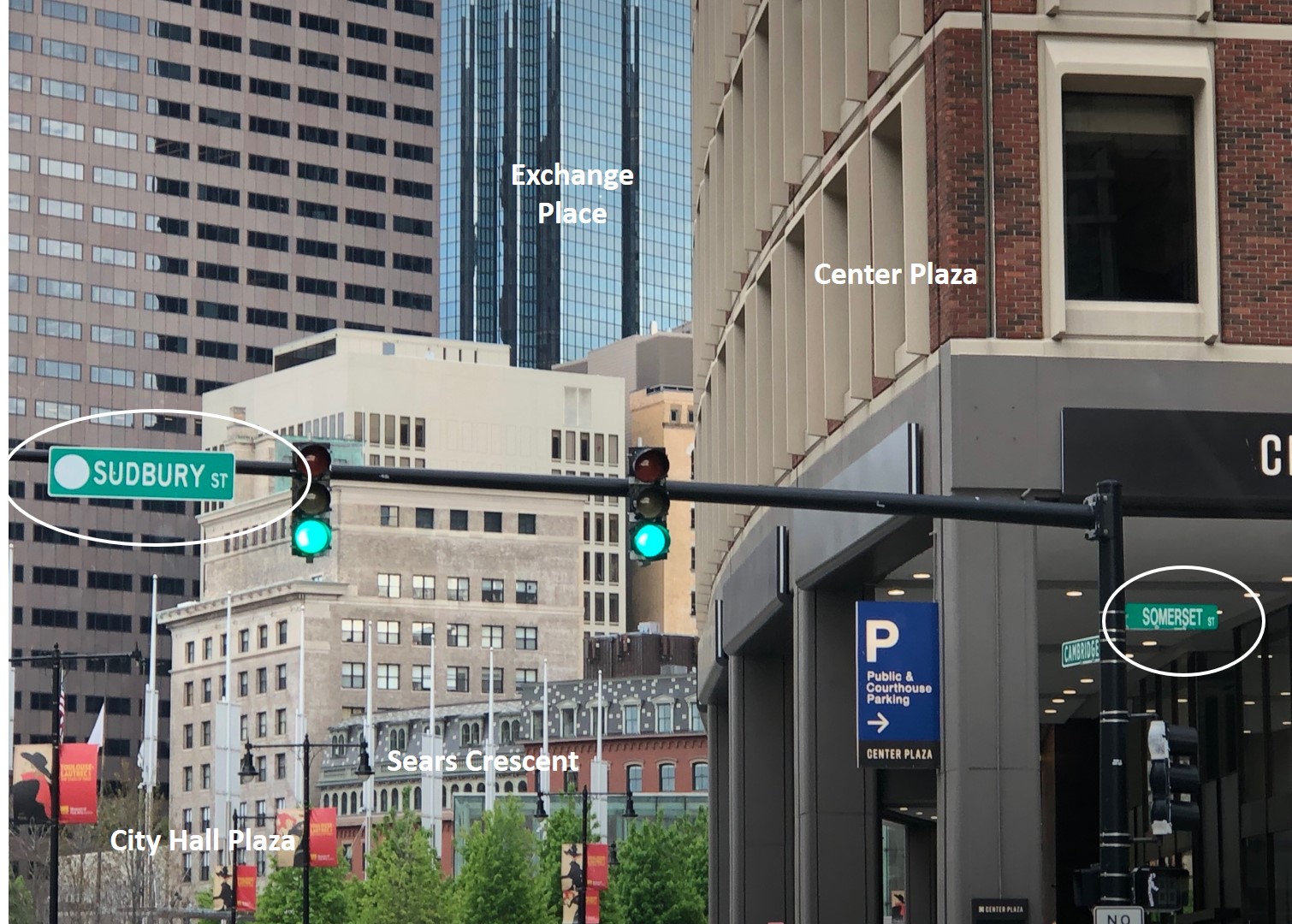 So, who named these two streets and when were they created? Given their location on the slope of Pemberton Hill, it comes as no surprise they go back to Boston’s earliest settlement by the Puritans. Although neither boasts any great length, one has a big history.

From 1639 to 1630, James Davis owned three acres just east of today’s Somerset Street. This land extended in a triangle to 13 feet of Beacon Street and within a few feet of Ashburton Place. John Bowers bought this plot in 1801 and increased it with the purchase of some additional land.

The Most Lavish Homes

Boston merchant David Hinckley built two adjoining stone mansions on the lower corner that in 1810 were described as the city’s most lavish homes. In 1851 the Somerset Club took up occupancy in one, its first location and the one from which it took its name. 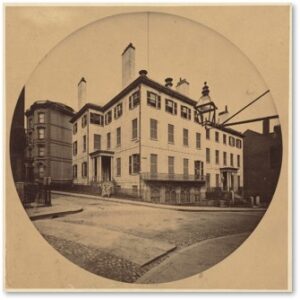 Two years later David Sears who had occupied the land as a tenant, purchased the estate. He worked his way up to merchant prince and built a mansion on the upper corner. When Mr. Sears the elder died, his son, David Sears Jr., constructed an elaborate new mansion at 42 Beacon Street.

Benjamin W. Crowninshield, who served as a Congressman and Secretary of the Navy, lived here from 1832 until his death in 1851. The Somerset Club moved into this space in 1872. The mansion stood until the mid-1840s when the ridge of Beacon Hill behind it was cut down and used for making land.

An office tower now rises from the Somerset Club’s original site. One of its original tenants, the Boston book-publishing firm of Houghton Mifflin, occupied five floors, from 26 to 30.

George Harrison Mifflin, a wealthy partner in the firm, grew up in the old Hinckley Mansion, which was the home of his grandfather. Benjamin Crowninshield.

On the right (west) side of lower Somerset Street once stood a row of Federal brick buildings, now long gone. Developer John Bowers, who laid out the street, built the house at #39 in 1805. It boasted an amazing number of famous people among its owners:

During the 1840s, the house fell on harder times and was divided into five apartments for gentlewomen, particularly female teachers. It likely burned in 1938.

Dr. James Jackson, one of the founders of Massachusetts General Hospital, the first general hospital in the Commonwealth, also lived in one of these patrician homes. The John Adams Courthouse and the Massachusetts Supreme Court later replaced the row of elegant Federal homes.

The building at #10 Somerset Street has an interesting history. Originally a home, it later became part of the early Boston University. BU, in turn, sold #10 to the Benevolent and Protective Order of Elks in 1908 after a committee of “7 competent builders” determined that the building was:

“… in a remarkable good condition. that the workmanship and materials used in construction of same were first class, that the building could be converted into an Elks’ Home, and that in their opinion no other building in Boston could be altered and give such splendid accommodations.”

They knew how to build them back then. In 1928 the B.P.O.E. sold the building to Harry E. Burroughs, a Boston lawyer who had established a $100,000 Newsboys’ Foundation, that bore his name. He remodeled the old Elks Home into a recreation and educational center to provide facilities for greater Boston’s 4,000 newsboys.

Mr. Burroughs, who emigrated from Russia at the age of 12, sold newspapers on Boston’s street corners, including in front of the Elks Home. 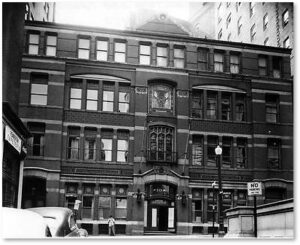 Mr. Burroughs must have known first-hand the rigors of standing on a street corner from early morning to late in the day, hawking the morning and evening editions to passers-by regardless of freezing cold, blazing heat, snow, or pouring rain,

For 25 cents a year, a newsboy could spend his time in the home. It gave them a place to warm up, dry off, play games, make new friends, and watch movies. It also provided an alternative to what was euphemistically called the “attractions of the street.”

The Long and Short of Sudbury Street

My reference books turned up much less information about Sudbury Street and online searches revealed only real estate information on the glossy—and glassy—new apartments and condominiums going up where the Government Center Parking Garage used to be.

Sudbury Streets starts at Cambridge Street and runs northeast, ending at the Rose Kennedy Greenway. Government Center fills the south side of the street, The Boston Police Department has its headquarters on the other side, along with those shiny new residence towers.

“The Book of Possessions,” tells us that Sudbury Street extended in the opposite direction south to School Street. It got its name in the first days of the Puritans settling in Boston and was known as Sudbury End as early as 1636. In the fluid approach to early street names, it was also known as, “the street that leads directly from the traying field to the Mill Pond.” Try writing that on an envelope.

In 1798, Sudbury Street included Deacons Street, which was laid out by Benjamin Andrews in 1776. This extended through his father’s estate from Friend Street to Portland Street. Boston author Stephen Minot lived and died on Sudbury Street.

So, there you have it: The Boston history of two streets that represent my personal story. They represent over 385 years of Boston’s growth and development, from open land to residences, then schools, institutions, and government buildings. You can walk both of them in about 10 minutes.