In 1858, Oliver Wendell Holmes called Boston the Hub of the Universe when he wrote in an essay:

“Boston State-House is the hub of the solar system. You couldn’t pry that out of a Boston man, if you had the tire of all creation straightened out for a crowbar.” 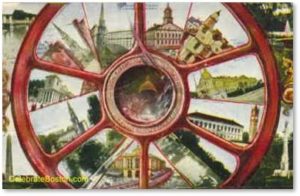 While Mr. Holmes intended this statement to be satirical, not pretentious, the city’s residents quickly both adopted and expanded it  from the solar system to the universe. Even so, Boston does have a place where the sun and the moon not only have their own streets but they come together in one place.

A Quirky Poem on Boston’s Streets

The quirky names of Boston’s street was noted in a poem called “Curious Coincidences,” which appeared in the New Monthly Magazine and was reprinted in the Boston News-Letter and City Record on December 31, 1825. One stanza says:

“Mr. Lamb in Red Lion street perks up his head,
To Lamb’s Conduit Street, Lyon goes courting;
Mr. Lover at Battle bridge hires him a bed,
While Moon is in sun Street disporting;” 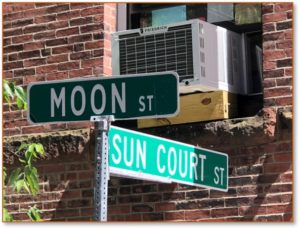 North Square in Boston’s North End was first developed when the Second Church was built in 1649 and completed the following year. The streets around it were laid out at the same time. These included Sun Court Street, Moon Street, Garden Court Street and Bell Alley but these streets did not receive their official names until 1708.

Until then, Sun Court Street was known as “the highway from the waterside to the new Meeting House.” It currently runs from North Street to Moon Street behind Sacred Heart Church.

Moon Street was also known as “a continuation of Sun Court” until 1708. In 1673, however, Captain Thomas Kemble, a resident of Moon Street, was condemned to stand in the stock for two hours as punishment for lewd and unseemly conduct. After a three-year absence, he had “saluted,” or kissed, his wife on their doorstep on the Sabbath Day. 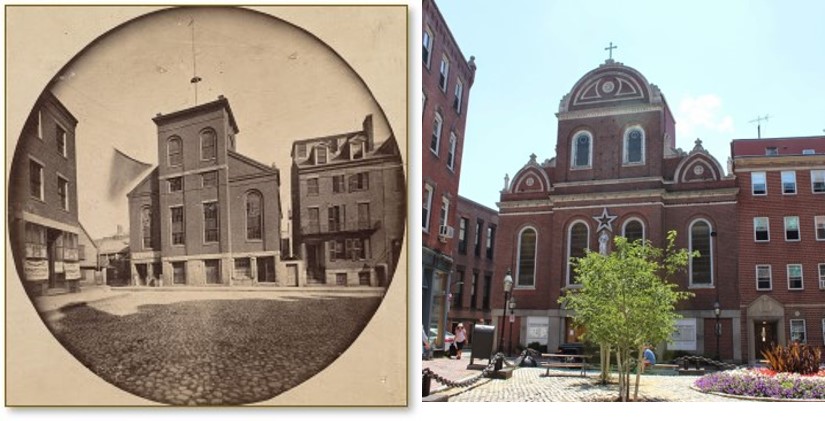 Moon Street then and now with Sacred Heart Church

Capt. Kemble’s house on the east side of the street had previously been a gift from Governor Thomas Hutchinson to Samuel Mather, son of Cotton Mather. It later became the first writing school in the North End, attended by Benjamin Franklin and Samuel Mather. The building was demolished in 1832 and replaced by a tobacco warehouse. In the 1860s, St. John’s Hall on Moon Street served as a social club for Irish immigrants. 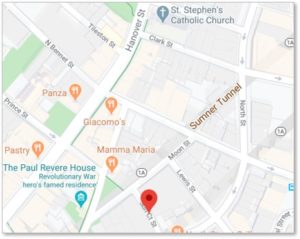 Neither Sun Court Street nor Moon Street has any particular history attached to them. They played no big role in the Revolution and didn’t house anyone famous. Nor do we know how they got their names.

We like them because their names are interesting and because they intersect. Together, the corner of Sun Court and Moon Street forms “the hub of the solar system” in one small part of Boston.