Recently, a Maryland couple was investigated for allowing their children to walk home alone. As reported in Slate, a 10-year-old boy and his six-year-old sister were walking back from a playground “about a mile away” when the police picked them up and drove them home. Then the cops tried to hassle the parents for an offense along the lines of child endangerment. This happened. Really. 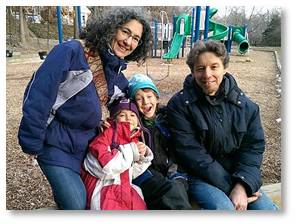 Danielle and Alexander Meitiv with their kids at the playground

They probably expected to find that the parents were absent, drunk, stoned, or abusive. Instead the police discovered that Danielle and Alexander Meitiv belong to the “free-range” movement, which believes that children must take calculated risks to grow up self-reliant.

As I have written before, this is the way children used to be raised before the advent of “hands-on parenting” and helicopter parents. It was also before the six o’clock news ran story after story about the hazards and dangers that threaten our children and how we can make childhood ever safer by hovering, cocooning them in bubble wrap, buying a new device, or making their decisions for them. Free-range children were the norm.

I hate to think of what today’s police would have done to my parents when I was five. Mom and Dad wanted to send me to school early, probably because I was already trying to read and write and they thought it would give me a leg up be in first grade a year before other kids. The only problem was that the parochial school my siblings attended, St. Louis de France in Swansea MA, had no room in the first-grade class. Ever resourceful, my mother found a space at St. Roch’s school in Fall River, driving me there from our home in Somerset every morning and picking me up every afternoon. That’s what parents do today, even when they live within walking distance of a school. So far, so good.

The Walk to Lunch

Lunch was a different story. For some reason, My parents decided that I would not eat lunch in the same room as the other kids at St. Roch’s. Instead, I walked out the front door to Locust Street, crossed Linden Street, and walked down Locust alongside Ruggles Park. Then I crossed Robeson Street, crossed Locust Street and went upstairs to my grandparents’ second-floor apartment. There I ate lunch with my grandparents and my uncle, who worked nights. Then I walked back to school. Alone. Every day. By myself. I was five. 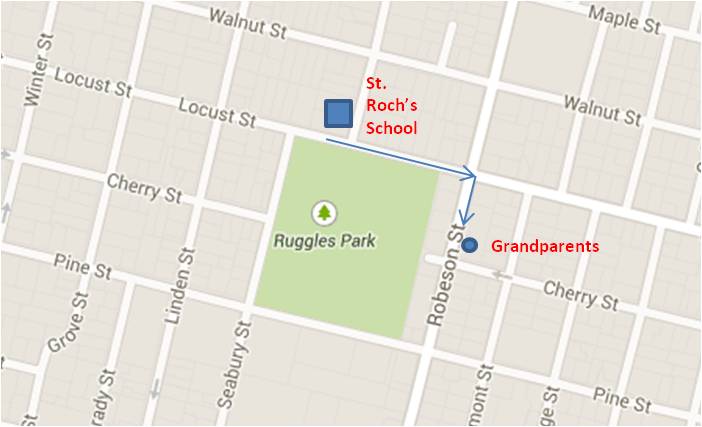 A police officer directed traffic at the corner of Linden and Locust but it wasn’t his job to keep an eye on one little girl going to and from lunch. My grandfather watched for me by the window but I don’t know what he could have done had something happened. Grandpa had been disabled by a stroke and rarely spoke or even had his teeth in. By the time he made anyone aware I was in trouble, it would have been too late.

No one ever bothered me. I wasn’t frightened—the walk was the best part of the whole trip. I was annoyed because I wanted to eat lunch with the other kids, not with three “old people.” We must have made a strange group around the table: my wizened disabled grandfather, whom people called “Petite Joe,” my strong grandmother who supported her family as a midwife, my uncle who always had a two-day growth of beard, and a five-year-old girl. Looking down on us was a big painting of the Holy Family, watched over by God the Father who was represented by a big eye at the top of a pyramid. I didn’t say much.

The point is that no one thought this arrangement was dangerous or that I was too irresponsible at five to cross two streets without holding an adult’s hand. My uncle could have walked me to and from the school but, clearly, no one thought it was necessary. I didn’t feel weak or vulnerable. I knew how to cross a street by myself and not to talk to strangers or get into strange cars. What else did I need?

If anyone had accused my parents of child endangerment—a term that did not exist in the fifties—they would have gotten an earful from my mother. That would have been something to hear. Children then were expected to function in the real world much sooner than they are now. The following year there was room in the second grade class at St. Louis so I got on the bus with my brothers and sister and my lunchtime walks were over.

What Did I Learn? 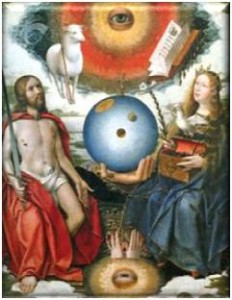 Something like my grandparents’ picture — but not the same thing

The experience taught me to be strong and self reliant. I was more afraid of God’s big eye looking down on me than I was of walking there and back again. I got a hot lunch instead of a cold sandwich and I suppose that was good.

Today folks would say I had “quality time” with my grandparents and my uncle although I can’t define what that quality actually encompassed. They didn’t really talk to me as much as they talked around and above me. I learned as Yogi Berra famously said, that “You can observe a lot just by watching.” And I started school early, which meant I got to learn the things I wanted to know much faster.

Safer but Not Smarter

I admit that I would not have had my kids take a lunch-time walk like this when they were five, even though they were both smart and responsible children. Things change but sometimes not for the better. Safer is not always smarter. Still, I applaud the growth of the free-range children movement. It’s about time we got back to parenting our kids instead of coddling them and giving them real-life experience instead of protecting them from the real world.

In ten years, these free-range children could be like the one-eyed man who rules the world of the blind. They will be willing to take risks their more protected contemporaries won’t even consider.  They’ll be stronger, more self-assured and more self-reliant. They’ll explore the world instead of hiding from it. They’ll make their own decisions. Those are all good things. And it’s good to know that at least some kids won’t be sitting passively and waiting for someone else to manage their lives.