I have written before about feeling sorry for today’s children because their lives are so structured and supervised that they seemingly have no time to play by themselves, to figure things out for themselves, and to learn how to get along with others without adults intervening. At no time in the year does this come across more strongly than on Halloween.

For years in our Sudbury house I watched children of all ages being walked around the neighborhood by parental units who either (1) came right up to the door with them or (2) stood at the end of the driveway and watched their kids all the way to the front door and back again. This usually depends on the age of the kids, with the parents keeping a greater distance as the children get older. So far, so good. 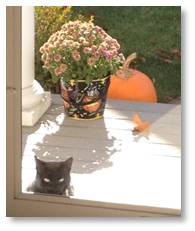 Early Trick or Treat at my front door

Inevitably, however, I realized that parents were still hovering in the street when their kids were old enough to be out on their own. This really struck me because we lived on a cul-de-sac, so the little ghosts and pirates could have worked the street safely and easily while their parental units waited at the end.

No trick-or-treaters come around the condo community where I live now. That’s too bad because it’s a contained neighborhood with wide streets, sidewalks, and light posts outside every door. Parents could drop the kids off at one end and pick them up at the other. It would be very safe. But that’s part of the problem.

Halloween isn’t supposed to be safe.

Halloween is supposed to be a spooky experience in which kids can go out after dark—sometimes on a school night—and extort candy from total strangers while pretending that something dangerous is hiding in the shrubbery. Is there a vampire in the bushes? Is that a ghost behind the garage? Is that a dog or a werewolf in the shadows?

On the Candy Trail

It was all so different in the fifties and sixties. My sister and I would get dressed up in our home-made costumes (everyone made their own costumes back then) and grab a supermarket bag (paper, not plastic). Then we would meet up with our friends and head out on the candy trail. Mothers and fathers stayed home to give out candy to the kids coming to their door.

We walked in and out of the streetlight glow under bare tree branches, crunched our way through dried leaves and stomped up onto wooden porches to ring the bell. We went methodically up and down streets, harvesting as many goodies as we could. The further away from home we got, the fewer people we knew—or who knew us—when the door was opened. Halloween night got a little stranger, a little wilder, a little spookier as it went on.

We would fill up one paper bag, grab another one and go our again in another direction. When my brothers, my sister and I finally poured out our bags onto the table, the amount of loot was truly astonishing. But that almost wasn’t the point. (Although I thought it was at the time.) What I remember most was being out on our own, wild and free.

There was power in figuring out our route before heading up the street, sometimes following other kids who knew where the “good houses” were. There was magic in watching the moon rise and the bare branches blowing in the wind, stepping around creepy jack-o-lanterns glowing on porches, listening to dogs barking and the shouts of other free-range kids a street or two over. There was excitement in overcoming the fear we were so eager to feel and getting the treats we wanted, even when the porch was filled with bigger kids. Above all, there was accomplishment in doing it all on our own, without our parents watching over us.

Was it dangerous? Not really. Somerset, Massachusetts, was a small town and we stayed pretty much in the Pottersville neighborhood. A lot of the adults who gave us candy knew we were Hervey and Marie’s kids, even if we had no idea who the folks at the door were. And traveling with a gang of friends gave us safety in numbers. More importantly, our parents had not been frightened to let us go out. It was a simpler time before news media began trumpeting stories of child abductions and poisoned apples. My parents had moved to a small town so their kids could be safe and they acted accordingly. That gave us a freedom unknown to today’s children. 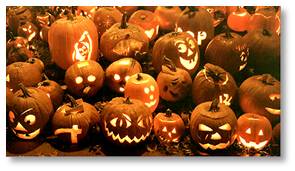 Back then, grown-ups handed out apples and doughnuts as well as home-made cupcakes and cookies, treats that we have long-since been frightened into abandoning. Today’s parents would treat a home-made cupcake like roadkill and drop it in the trash untouched.

Most of the horror stories of sharp objects in Halloween treats or poisoned candy were unsubstantiated rumors although a very few were real. The news media did such a good job of spreading fear, however, that most people now rely on packaged candy with the wrapper intact and hermetically sealed. And parents are afraid to let their children go out on their own.

Most neighborhoods are probably still safe, but parents have been spooked into believing there’s a rapist or molester behind every tree. This is ironic because we Baby Boomers love our Halloween and have turned it into big business. We decorate our houses and lawns, play spooky music, and put on costumes scarier than the ones the kids are wearing.  e’re trying to reclaim the wild and free feeling we knew back then but that today’s kids never get at all. After all, it’s hard to feel wild and free, much less powerful, when Mom is never farther away than the end of the driveway and there are more parental units on the street than kids.

Even on Buffy the Vampire Slayer, the “Big Bads” in Sunnydale stayed home on Halloween and left the night to the trick-or-treaters. It doesn’t get any safer than that. 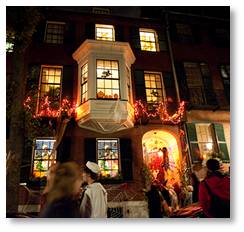 NOTE: Boston parental units can take advantage of @BostonByFoot’s once-a-year Beacon Hill with a Boo! tour tomorrow night. “Hear stories of ghosts, murders and mayhem that haunt this quiet neighborhood while walking among the Halloween decorations and the people who come to Beacon Hill every year to celebrate.”

The houses are tricked out and people answer the door in costume. It’s a hoot!