This weekend we saw Mud, a charming and engrossing movie set in current-day Arkansas. It’s a coming-of-age film about two 14-year old-boys who encounter an enigmatic loner named Mud. He needs their help to reconnect with his childhood sweetheart because he can’t leave his solitary camp on a river island for dark reasons that soon become clear. It’s a terrific picture, with excellent performances by Matthew McConaughey, Reese (Do you know who I am?) Witherspoon, Sam Shepard, Michael Shannon, and newcomers Tye Sheridan and Jacob Lofland. The movie was written and directed by Jeff Nichols, who did an excellent job, particularly with the script. It was filmed on location and has a gritty reality that both draws you in and makes you appreciate your own advantages. I recommend it highly if you like intelligent, well-made movies. Partway through the film, though, I also realized that the two boys, Ellis and Nick, are something increasingly rare in today’s America. They are free-range children who spend their summer doing what boys and girls used to do as a matter of course: playing, exploring, messing around the river, doing some part-time work, checking out the opposite sex, riding bikes, talking, and generally having a good time. This behavior stuck out for me because I had just blogged about the “Teen Wing,” a gilded cage created by wealthy people to keep their kids home, entertained and safe from any possible danger. 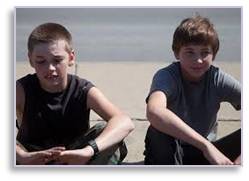 Nick & Ellis on the river

At 14 Ellis and Nick, are considered old enough to take a boat up and down the river without an adult present or even (gasp) wearing life jackets. They also ride a motorbike without a helmet, ride in the back of a pickup without a seat belt, and handle tools without adult supervision. Their parents are so busy trying to make a living and deal with their own problems that they seldom pay attention to where the boys are unless they need their son home at a particular time for a specific reason.  When asked where he is going, each of the boys also uses the classic line, “I’m going over to (the other boy’s) house.” End of story.This is what summers were like when I was growing up. In the Baby Boom, there were so many children everywhere that we ran in small groups and large packs, but we were seldom alone. Everyone had brothers and sisters, sometimes a lot of them. We spent our summer days playing games that included the old standards like hide-and-seek as well as pick-up hardball, and handball against the playground backstop.  We swam in the river that was just a block from our house, despite the fact that it was not nearly clean by today’s standards. High tide was best because then the river was filled with warm water from Narragansett Bay. We rode our old fat-tired Schwinn bikes all over town—without helmets—and explored in woods that were long ago cut down for housing developments.

We went out in the morning, came back for lunch, went back out again, and came back in when our moms called us for dinner, then went out until it got too dark to see our hands. The only other times our parents knew where we were came when we played board games or cards in the back yard or we collapsed with a book somewhere in the shade.   This was considered normal. Parents did not think it was their job to entertain their children—or to spend much time thinking about how the kids entertained themselves. They had no time to hover over us or micro-manage our days. They taught us not to get into cars with strangers and to write down the license plate number of any car that we saw another kid get into. We watched out for one another. There were no 911 lines, no cell phones, no helmets, knee pads or other protective gear, unless you were umpiring a baseball game. Bikes were second-hand and handed down from one kid to another. You took care of the one you had because, if you left it out in the rain and it rusted, you wouldn’t get another one. By today’s standards, that was all incredibly dangerous. It was also incredibly freeing. We learned how to allocate our time, figure out which friends we liked best, make decisions, learn from the consequences of bad decisions, and move on. If we fell off our bikes and scraped our knees, we washed off the blood and kept going.  Among the girls, at least, we didn’t smoke, drink or take drugs. Even had we wanted to, none of us had the money. At thirteen and fourteen, sex wasn’t an issue.

Watching Mud was like taking a breath of fresh air.  I feel sorry for today’s kids. They can’t get away from their “hands-on” parents and helicopter parents even if they want to. Their days are scheduled and over-scheduled. Coaches, teachers, tutors, senseis, and  instructors watch them when their parents drop them off for classes. Their lives aren’t their own so they escape into electronics because it’s not possible for them to just take off and mess around all day as we used to do. Even if they could, they probably wouldn’t know what to do without rules to follow or an adult giving them instructions.
They remain over-grown children long past the age when they should be taking steps into independence and adulthood. How sad for them.