The big snow appears to be taking a breather but a fresh blast from the Polar Vortex is taking our breath away. The temperature here this morning was six degrees below zero and several places around Massachusetts clocked in a minus 17 to minus 23. With wind-chill factor it felt like 20 below.  By afternoon the mercury had climbed to 23 and it felt balmy. BTW: It was 39 degrees at noon in Anchorage, Alaska. 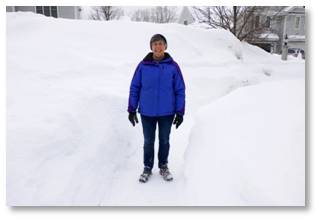 Me on the front walk — where’s the street?

The impact of all this cold and snow has been varied.  I feel great sympathy for the hourly wage employees who have been unable to reach their workplaces and will suffer dire financial consequences. Also for the folks who have water pouring into their houses or faulty heating systems letting them down. In this weather, being warm and dry is paramount.

But here are some of the less dire results that I have seen: 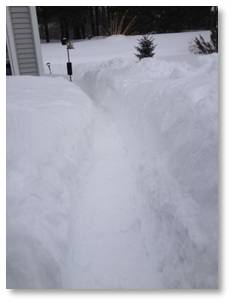 The path to the birdfeeder

We had one mild day—Sunday—when the sun was out and the temperature hit 40 degrees. It felt like summer.  Snow melted and icicles dripped. It gave us a very narrow window to scrape the driveway clear and clean up the paths—which are more like canyons. Then the vortex returned and froze it all as hard as concrete.

Now we are back in the deep freeze, and talking about how hard this winter has been. In fact, though, the worst part isn’t even a month old. The blizzard, code named Juno, occurred on January 27. Until then, it had been a relatively mild and snowless winter. If only it had stayed that way. Friday will mark the one-month anniversary of our first big storm.

We cling to small indicators that spring might actually arrive at some point.

Okay, that’s not much but it’s all we have. Some years March has been a warm and sunny month with crocuses and snowdrops poking up between the few remaining mounds of grainy “corn snow.” That’s not going to happen next month unless a warm front suddenly comes down and sits over New England for a couple of weeks. It could be May before daffodils dare to put in an appearance. And June might arrive before we hear the pop of putters and the whiinngg of drivers from the golf course.

We can’t change the situation, though, so we all just hunker down and try to stay warm and dry.