Here we are, back in the Polar Vortex and setting records for cold and wind-chill factor. Massachusetts is better off than, say, Erie PA, which got 58.5 inches of snow in two days. We only have about one foot on the ground — but cold is cold.

The Polar Vortex Gets Serious 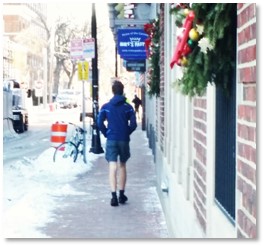 People who don’t believe science need to pay attention to the wind-chill factor in Polar Vortex weather because it will give you frostbite before you can say Jack Frost. Still, that doesn’t deter the bros who insist that every day is shorts weather despite what the thermometer says.

We see them all the time here in rain, snow, ice, freezing rain, fog, and high winds — whatever. When the rest of us bundle up in coats, hats, scarves, gloves and boots, these men (they are all men) stroll down the street in shorts and a light jacket with their hands in their pockets. The only concession they make to winter is to wear shoes and half-socks instead of their usual Tevas.

Wow, I could use a metabolism like that right now. Normally I take a water aerobics class several times a week at 8 am, which means I leave the house at 7:30. Driving through an industrial park en route, I note the large clock/thermometer outside one building. Yesterday it said 1º.

I don’t know what it said this morning because I opted to ditch the pool and do a warm dry afternoon of treadmill and weights instead. The Longfellow Club I go to has trouble keeping the pool warm in cold weather. The water has been dropping one degree a day since the Polar Vortex arrived.

When I called this morning, they said the air in the pool bubble was 60º and the water was 81º. I know that sounds okay, even toasty, especially compared to the outside temperatures. But, really, it’s not.The pool thermometer is set near the heater jets so it always registers a few degrees higher than the middle of the pool.

That means the water right now is really 79º to 80º and that’s darn cold when the air above you is 10 degrees colder. After an hour in the water, even with a lot of exercise, you get chilled to the core. I stuck it out at until now but threw in the towel this morning.

Meanwhile, the scientists at the Mount Washington Observatory are making their own weather. The top of Mount Washington routinely records extreme weather conditions. Here’s a video of what happens when you pour boiling water into -34º air — three degrees colder than the previous record set in 1933. Oh, also high winds of almost 80 miles per hour: 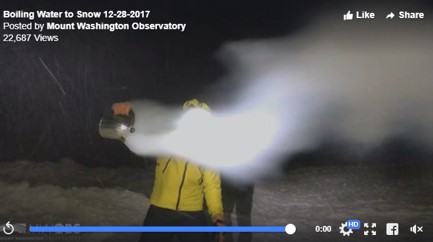 The long-range weather forecast offers no relief. The temperatures will stay this cold—or colder—right through New Year’s Day. This is particularly bad news because it means the Polar Vortex not only hit earlier in the year than it did last time it visited, but it’s going to hang around for a while. Here’s how the weather map looks. 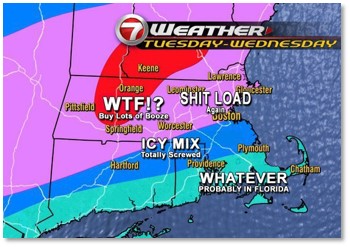 And here’s a more colloquial interpretation from the wags @OnlyInBoston:

What to Do in the Polar Vortex

I’m going to put on the gas fireplace now. If we still had a cat, she would not budge from in front of it. Cats are smart.