Good character is more to be praised than outstanding talent. Most talents are, to some extent, a gift. Good character, by contrast, is not given to us. We have to build it, piece by piece — by thought, choice, courage, and determination.”

In the business world character means a great deal. It sets the tone for the way a business is managed and perceived. It also reflects how its employees conduct themselves. Character shows itself in all levels of a company, carrying equal weight in the board room and the break room. It also manages to draw a great deal of attention when we discover it isn’t there.

This is an obvious truth for companies like Enron and Tyco, whose public downfall and executive shame is well known. Then we have Bernie Madoff and Senator John Edwards, two examples of character replaced by greed and a belief that they were above the law. The military has suffered the embarrassment of high-ranking officers whose poor judgment ruined a lifetime of career achievement. And so many more.

But it’s also true for companies that you and I have worked for. Companies that did not appear in the headlines but were destroyed or damaged by hollow leadership. Character, or lack of it, does not play favorites. 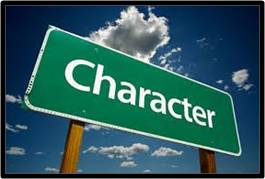 What is character? One dictionary defines character as “the complex of mental and ethical traits marking a person.” In another dictionary, character is “the stable and distinctive qualities built into an individual’s life which determines his or her response regardless of circumstances.”

Despite these concise meanings, I view character like the old definition of pornography–with a slight twist. I am not convinced there is a finite set of adjectives to describe what it is, but when it’s absent I know it, and when it’s flawed I can see it.

When I began this post I polled the four executives in my current company, asking each the same question. When you interview a candidate, what takes priority–character or skills? Without hesitation they answered character. Each of them believes a resume has stated skills and a skilled interviewer can quickly determine if they are solid. It’s a pass/fail.

How Can You Tell?

Character determination requires a bit more work. Skills can be assessed over the phone but a face-to-face meeting determines character. For these executives, assessing an applicant’s character incorporated questions designed to reveal traits proving or disproving strong ethical and moral values. 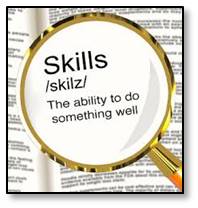 The surprising find for me was the admission by all of them that they relied on gut instinct, resulting in a clearly subjective determination. They drew from their own backgrounds. Each of them created behavioral questions drawn from personal experience to make a character assessment. It became their what-not-to-do check list. They had some great stories.

Today many companies hire for skills without enough attention paid to character. People represent potential so companies look for high energy and highly skilled employees, especially at the executive level. A track record of mergers, acquisitions, and IPOs–accomplishments showcasing the ability to do something well–becomes the deciding factor. Character is overlooked or pushed aside as irrelevant.

Skills should be highly regarded. They are important and necessary to keep organizations and businesses running. They bring in results, get the job done, and are components of effective leaders. But character provides the foundation on which these results flourish. Without character, the results are unsustainable. One without the other has diminished return to both the organization and the company.

One of These Things is not Like the Other

The word comes from the Greek kharakter meaning “engraved mark,” “symbol or imprint on the soul,” and “instrument for marking.” In ancient times your character was a distinguishing mark imprinted on a wax seal that became your monogram–a visible symbol of who you were–painter, potter, smith or tradesman.

In the 18th century it became the sum of who you were; the embodiment of your intellect, judgment, moral discipline, and temperament. As we rolled into the 20th century, character became personality. Honor and morality were being replaced with famous and infamous, good and bad. Character became the ability to get by without getting caught. Personality became the front runner for everything from celebrities to politicians to the small company I went to work for.

I saw the absence of character in my company leadership. Not in a headline-making way but in a series of miss-steps that began with a Board of Directors decision to hire a new CEO and ending with the decimation of company morale, leadership and innovation. People lost their faith, their belief in the company and their jobs. The individual at the center of all this lost his job too–but he walked out the door with $3.4 million.

The board did not do their homework. They either failed to ask character questions or made a conscious decision to overlook them. Either choice tells me the absence of character began right at the top. The information grid tells me the answers were right in front of them had they decided to look.

Let me be clear–he had intelligence and he had skills. He had a genius-level IQ that was best suited to a think tank where he could conduct his work in a silo. He had no business leading a company. His personality was compromised by what appeared to be adult Asperger’s syndrome along with a visible lack of character. His ego was huge and his moral compass was broken.

The absence of CEO character became an openly talked about issue. As in “he lacks character” and “he has a character deficit.” I also heard “he’s a complete nut job.” Those in the trenches knew it from the start. The senior leadership and the BOD took a year to admit their mistake, although they knew it after three months.

I suspected it the first time I met him. When I saw him with customers I began to think the company had made a mistake. When I found myself on the receiving end of an Asperger’s-like tirade in front of senior management and customers there was no doubt left in my mind.

If you had to choose between a leader with character and one with skills, which way would you go? Leadership experts tell us that organizations and companies prefer leaders with both qualities. Well, in my most professional blog voice let me say–duh! Unfortunately we are surrounded by real-world examples that tell us they don’t follow their own advice. Most of us have lived through this in one or more companies where skills or personality won out over character. We can name names.

The higher you go, the more visible this deficit becomes. It exists in lower levels, but they tend to wash out on their own. You rarely hear of an executive improving his or her skills. They believe they have all they need. The middle management levels I work in are solid because the character sitting in the CEO seat demonstrates character, hires character, and promotes character. I chose well and so did they.

Skills can be learned. Character is who you are.