Back in February of last year, I posted when Babe Ruth’s house, Home Plate Farm, was on the market. Now another famous person’s home is up for sale and its history is equally interesting. 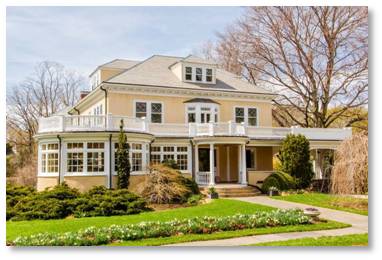 The house was one of several owned by Charles Ponzi, who created the con game that bears his name—and that was used to such great effect by Bernie Madoff a century later.

The yellow-shingled Colonial Revival house at 19 Slocum Road in Lexington, MA has been listed with The Winchesters for $3,300,000. It’s a beautiful home built in 1913 with 7,232 square feet, 16 rooms, seven bedrooms and five and a half baths. It also includes a four-room guest house.

This house interests me because I am learning the Dark Side of Boston tour for @Bostonbyfoot. Focusing on pirates and witches, smuggles and swindlers, fire and flood, the tour covers Charles Ponzi’s old stomping ground in the North End of Boston.

The Man Who Built the Ponzi Scheme

Charles Ponzi, one of the greatest swindlers in American history, duped thousands of investors with a complex scheme that seemed to be–and was–too good to be true. This dapper Italian immigrant was, like most con men and sociopaths, full of charm, charisma and cleverness. He “opened for business” in late 1919, offering to double investments through his new Securities Exchange Company at 27 School Street at a time when global currencies were fluctuating wildly in the wake of World War I.

The definition of a Ponzi Scheme is: “A fraudulent investing scam promising high rates of return with little risk to investors. The Ponzi scheme generates returns for older investors by acquiring new investors. This scam actually yields the promised returns to earlier investors, as long as there are more new investors. These schemes usually collapse on themselves when the new investments stop.”

Known Throughout the United States 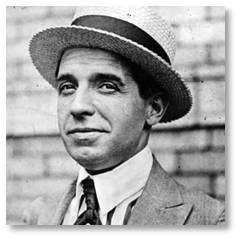 Charles Ponzi attracted a steady stream of new investors by promising them a 50% return on their money in 90 days and then 45 days. His scheme was based on the arbitrage of international reply coupons for postage stamps. Mr. Ponzi initially bought a small number of international mail coupons in support of his scheme, but quickly switched to using incoming funds from new investors to pay the promised returns to earlier investors—and to himself.

Making his profit on the difference in currency prices between countries, Mr. Ponzi became a millionaire in a few months. His operation took in so much money that it was the first to become known throughout the United States.

Preying on His Own People

Like Bernie Madoff, he preyed on his own people. In his case they were Italian immigrants in New England who were struggling to make it in a new country. And like Madoff, he never advertised, speaking to reporters only after he was a success. He allowed his compatriots to spread the news of his genius, instead and they did it very effectively with the newspapers of the day helping to build his reputation. His victims came to him, begging him to take their money so they, too, could get rich.

Like many sociopaths, Mr.Ponzi had an outsize ego and grandiose sense of his own importance. Once, as he walked through a crowd, someone yelled: “You’re the greatest Italian in history!” Ponzi demurred, saying he was only the third-greatest: “Christopher Columbus discovered America, and Marconi discovered the wireless (radio).” But another admirer answered: “You discovered where the money is!”

He did, indeed. Mr. Ponzi discovered that it resided with the greedy and the gullible as well as with the desperate: those who needed to believe in something that was clearly too good to be true.

The House on Slocum Road

In 1920, he purchased the house on Slocum Road in Lexington, which was owned by prominent industrialist Richard Engstrom. Mr. Engstrom had built the house for between $35,000 and $40,000 but Charles Ponzi initially offered him only $25,000. A con man through and through, however, he raised the offer to $39,000 with the condition that Mr. Engstrom invest in the Security Exchange Company. Mr. Ponzi paid with $9,000 in cash and a Securities Exchange Company certificate that he claimed would be worth $30,000—eventually. As Erin Ailworth writes in the Boston Globe:

“Engstrom’s lawyer insisted that Ponzi put up a deposit certificate to guarantee the money.  Three years later, with Ponzi in jail, the property was purchased out of bankruptcy by a lawyer named John Devine.”

Eventually, the scope of Mr. Ponzi’s  scam brought him down and he admitted to taking millions from investors, many of whom were neither wealthy nor sophisticated. Collectively they lost an estimate $20 million in 1920s dollars. He returned $8 million before his trial but his creditors received checks representing only .5% of their claims.

Ponzi’s Time in the Federal Penitentiary

Charles Ponzi was sent first to a Federal penitentiary for mail fraud and served his sentence by 1924. But he also received  seven to nine years on a State charge. In between sentences he was released on bond. Fleeing to Florida, he tried a scheme selling swampland under the name Charpon. (Ever wonder where the Florida swampland scam came from?) He was arrested, jumped bail, was caught in New Orleans, and returned to Massachusetts. Eventually deported from the U.S., Mr.Ponzi died alone and apparently destitute in Brazil in 1949. 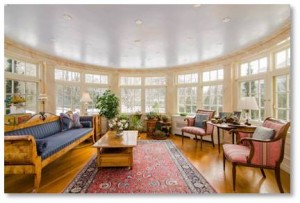 But he had the last word:

“Even if they never got anything for it, it was cheap at that price. Without malice aforethought I had given them the best show that was ever staged in their territory since the landing of the Pilgrims! It was easily worth $15 million bucks to watch me put the thing over.”

Lack of empathy for others is, of course, another characteristic of a sociopath, along with lack of remorse, shame or guilt.

Now the house where Charles Ponzi got a good night’s sleep is being offered to the public for the first time. You, too, can enjoy the dining room for 20, the sunny circular conservatory, the fully renovated kitchen and the exercise room with sauna. Number 19 Slocum Road can be yours for a mere $3.3 million.The brokers show it to qualified clients by appointment only. Don’t bring your Securities Exchange Company certificate.