Ironically, publications are now coming out with their Spring Travel Issues just as the world abandons travel in favor of social distancing and public safety. We had planned and April Viking River Cruise from Basel to Amsterdam but that is now an impossibility. We’ll reschedule when things return to normal.

A Window on the World 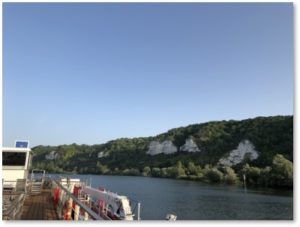 Despite social distancing, those of us who love to travel are opening a window on the world by looking back to previous trips. The Friends of Viking Cruises page on Facebook is playing a “Where in the world am I” game in which we post our photos of places we have visited and ask others to guess where in the world it they were snapped.

Last year, my husband and I took Viking’s France’s Finest Cruise and I wrote a post about following in the footsteps of Vincent Van Gogh’s presence in Provence. Today, I took a psychic vacation, returning to the summer of 2019 and the second part of the cruise. That’s when I spent time with the impressionists Pierre-Auguste Renoir and Claude Monet. 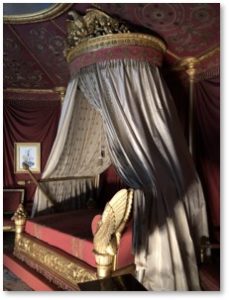 The second half of France’s Finest (which is also a separate cruise) leaves Le Pecq outside Paris and travels up the Seine River to Rouen — the jumping-off point for the Normandy Beaches — and back. We added an additional excursion to the Château de Malmaison, the mansion of the Empress Josephine Bonaparte.

Although the day was hot and the house was crowded, I enjoyed touring the beautiful building with its furnishings and the gardens with the Empresses’ signature black swans. It demonstrated how royalty lived in the 19th Century.

Note: After her divorce from Napoleon, Josephine Bonaparte retained ownership of Malmaison. This reminded me of Zsa Zsa Gabor’s famous comment: “I’m an excellent housekeeper, dahling. Every time I get a divorce, I keep the house.”  Way to go, ladies. 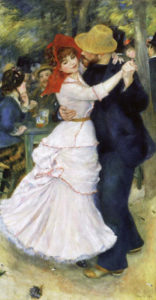 On the way back to Viking Rinda, we drove through Bougival and our guide asked if we knew why the town is famous. Because am I familiar with the collection in Boston’s Museum of Fine Art, and because I am a smart aleck, I replied with a mention of Renoir’s “La Danse à Bougival.” This beautiful, full-length painting depicts Renoir’s friends, Suzanne Valadon and Paul Lhote, dancing at an outdoor café. La Danse a Bougival is one of the MFA’s most famous works.

Our guide then told us that Bougival was also the site of the Machine de Marly, a huge hydraulic pumping device that supplied water from the Seine to the fountains at the Palace of Versailles. My father, the engineer, would have loved that.

Further up the Seine in Vernon, I ditched a lecture on Impressionism for a visit to the Musée de Vernon. I had already studied Impressionism and I never miss a chance to add to my Life List of Art Museums. This one occupies the former private mansion of the Le Moine de Bellisle family (15th – 18th centuries). 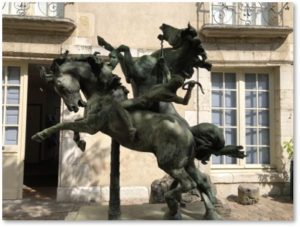 The Horse Tamers (right side)

In the courtyard, models for The Horse Tamers, bracket the front door. The fulls-size versions of these statues, created by the American sculptor Frederick William MacMonnies, can be found at the entrance to Brooklyn’s Prospect Park.

The small but exquisite art museum was only a short walk from the ship. As it was completely empty, I spent several quiet, peaceful hours wandering its galleries. I enjoyed the large collection of animal art — around which the museum built its collection. I also found Monet’s “Cliffs of Pourville at Sunset 1896” and a round canvas of his “Nymphéas,” or water lilies—a taste of things to come just three miles further north. 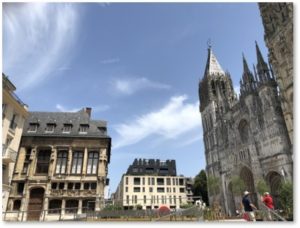 Fans of Claude Monet’s work know the City of Rouen because the artist painted 31 canvasses of the city’s cathedral from 1892 to 1894. He took rooms across the square from the cathedral and painted its façade at different times of the day, moving from one canvas to another as the sun and the weather changed both light and color. Monet worked simultaneously on up to 10 canvasses at a time.

Boston’s Museum of Fine Arts has several of these large paintings in its permanent collection, so seeing the actual cathedral felt like visiting an old friend.

After touring the cathedral and the city’s historic district, my husband and I walked up to the Musée des Beaux Arts de Rouen. We toured its extensive (and cool) galleries for hours, ending with their excellent collection of Impressionist paintings. The galleries display works by Money, Renoir, Albert Sisley, Camille Pissarro, and Gustave Caillebotte.

Two nights later, we strolled up from where Viking Rinda was docked to see the sound-and-light show at the cathedral. We had heard great things about it and were determined to attend despite the 10:00 pm start time. It did not disappoint. The two shows paint the cathedral’s façade with light, pattern, and color in a way that even Monet could never have imagined.

See a video that shows part of one sound-and-light show here. 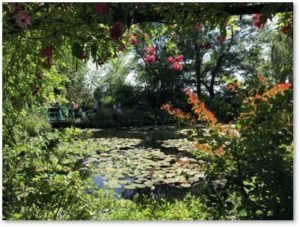 The pond with waterlilies

Further up the River Seine, we stopped in Giverny where Monet’s famous gardens flourished in the warm June sunlight. (Okay, it was really hot—90s F.) Everything seemed to be in full bloom, including the crowds.

Museum docents limited admission to the garden, allowing in only a certain number of people at a time to prevent overcrowding. I didn’t find the wait onerous—what could be bad about standing in a beautiful place on a beautiful summer afternoon, surrounded by trees and flowers?

Strolling along the winding paths of the garden was a marvelous experience despite the crowds. The pond, the waterlilies and other gorgeous flowers, the red Japanese bridge, and the recognition of the tremendous effort that went into creating the garden make this a magical place.

The Studio and Beyond 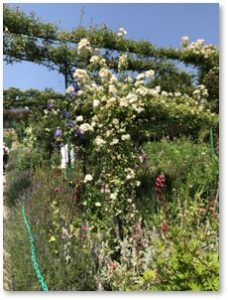 Roses in the garden

At the end, you can go through Monet’s house and step into his studio. The walls are lined with reproductions of paintings by Monet and his friends to give visitors a sense of what it looked like when he worked there. After a short stint in the gift shop, I strolled across the street to the Impressionist museum, which was beautiful and much less crowded.

Monet’s Gardens are one of the world’s must-see places, but you can’t visit it at its peak without encountering a multitude of people. It’s unfortunate, but true. Whether they are art lovers, fans of history, or travelers checking off a line on their bucket list, they all want to be there at the right time.

You just have to take a deep breath, focus on what you want to experience, and live in the moment. After all, to the other folks, you’re part of the crowd around them. 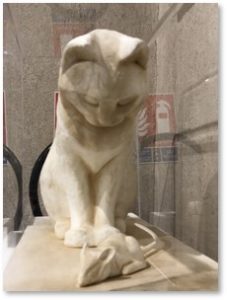 My favorite cat and mouse in the Musee de Vernon

To write this, I traded in some of a cold gray March day to relive summer warmth and museum-quality beauty. I sorted through a lot of photos that made the trip real, if only for a short time.

I wish we could step back in time and experience the journey again, but for real. Failing that, we’ll plan for when things return to normal — or as close to it as this pandemic allows.