I was in Chicago last week walking next to my younger self. McCormick Place is a massive event venue, and I was navigating one of its endless halls when I noticed her beside me. 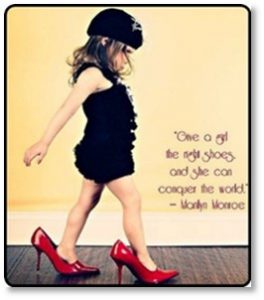 She was young and thin, dressed smartly in a pencil skirt and jacket with just the right amount of jewelry. But it was her shoes that caught my eye. Stunning black stilettos that, combined with the skirt, made her pace slower than mine. I was looking at a younger me in high heels, and I gazed at her shoes with a mixture of envy and pain.

It’s worth noting the walking distance between the hotel and meeting venue (according to my step counter) was just under half a mile. She was going to make a round trip walk of almost one mile in those shoes several times if her schedule was anything like mine.

My older self (in sensible shoes, pants and a shirt with our corporate logo) quickly passed my younger self with a sense of déjà vu and just a bit of longing for the me I used to be—the one in stiletto heels.

When did I become the wearer of sensible shoes? I admit it was not an easy transition because I loved my high heels. Truth be told, I have a kind of Imelda Marcos thing for shoes, and no amount of discomfort was enough to make me give them up. It was all about the shoes.

Then I broke my foot. Along with the tarsal bone fracture came damaged cartilage, surgery that included two metal pins and a very long recovery in my new collection of sensible shoes. Suddenly I was three inches shorter and hit with the realization that my left foot would never wear another high-heeled shoe. By default, my right foot had to go along for the ride.

Admonitions from the surgeon convinced me that wearing anything but a low heel would cause additional damage and we would meet again under similar conditions if I failed to heed the warning.

I lovingly kissed every pair of stilettos I owned good-bye and donated them to a local charity drive. Well, almost all of them. Black patent leather stilettos are my muse.

The right shoes give you attitude. It felt like I had taken mine off and lost the moxie I had when I wore them. My younger self did not have the confidence most people that know me would agree I have now. High heels were empowering. When you look good, you feel good. 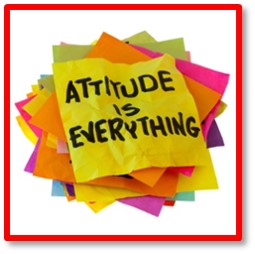 Looking at the young woman walking beside me I caught a glimpse of her future. I could tell by the careful way she dressed appearance was important to her. The younger me was like that too. I dressed for success every single work day. Even on Casual Friday I was pressed and presentable because you dress for the job you want, not the one you have. She knew it too.

I wondered what company she worked for and the type of work she did. I hoped they would recognize her potential and she would have strong women mentors and managers like I did. I could tell she already had some attitude and hoped it would mature as she continued on her career path. 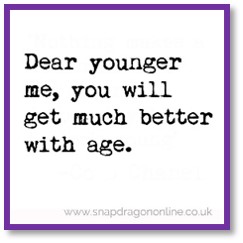 Marilyn Monroe said, “Give a girl the right shoes and she can conquer the world.”  I embraced that philosophy with my whole heart and had the shoe wardrobe to back it up.

When I could no longer wear them I seriously wondered how I would survive. I confess I tried, but my foot and the shoe were on opposing sides and we called a truce. I was not able to ignore the pain and the risk that came with it. I was vain, but I was also smart and knew the doctor was right. My feet were much more important than my shoes.

About Those High Heels

Many years later, when my sensible shoes and I had formed a strong bond, I heard actress Helen Mirren offer this observation on her 70th birthday:” If I could give my younger self one piece of advice, it would be to use the words “f*ck off” much more frequently.”

I knew what she meant. Confidence comes with age, and the ability to suffer fools gladly diminishes alongside it. Shoes have nothing to do with that.

I thought about the young woman who had briefly walked beside me.  For a moment I contemplated waiting for her at the registration desk—our mutual destination. “It’s not about the shoes”, I would say, as if I were Moses presenting the 11th Commandment.

But she was young and would likely not believe me. I realized that, like my older self, she would figure it out the longer she wore them. I kept walking, hoping she would keep one pair as a reminder.