Last week was a sparse one for posts on The Next Phase blog because I was away. On vacation. Out of the country. In the Caribbean. Yeee-hah!!We had a week of our Marriott Vacation Club membership to use up and decided to take it on Grand Cayman Island. I didn’t post this information in advance and I didn’t put photos of our vacation up on Facebook for one simple reason:  it’s telling the world that you’re not at home. While I do enjoy seeing pictures of my friends’ vacation resorts and activities, restaurant meals and umbrella drinks, sunny beaches and sandy sunburns, I have no desire to broadcast the fact that, back home, my house is empty.So off we went, following the money that flows to Grand Cayman Island from members of the One Percent Club. (Yes, there are banks everywhere.  Some are in office buildings while others are in strip malls.)  Here are the vacation photos I did not put on Facebook. 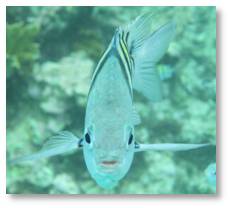 First, no one there says “The Caymans.” It’s Grand Cayman, as distinguished from Little Cayman and Cayman Brac, the other two islands in the group. Or Cay-Mon or the Cayman Islands. They are British, so cars drive on the left side of the road, which can be pretty scary when you hit a Round-About and everything is reversed but cars are coming at you fast from the wrong direction. As befitting an island that handles a lot of money, Grand Cayman is clean and prosperous. The kind of endemic poverty you see in other parts of the Caribbean with a scrawny goat tethered in the chicken-scratched front yard of a ramshackle concrete hut does not exist here. There are chickens, though, and many of them cross the road. I even saw one pecking right outside of the Georgetown KFC: dangerous turf.Second, we did not actually stay in the Marriott Resort because four of its five floors were being refurbished and we scheduled this trip at the last minute. Instead we set up in Plantation Village, three doors down from the Marriott on Seven Mile Beach. Over the years, we have traded off our Marriott points for other Interval International venues many times, both in the US and outside of it. This was, however, the first time we were disappointed with our digs. The two-bedroom, two-bath suite (typical of a time-share resort) sounded good but did not meet the reviews that we had read on Trip Advisor.Third, the weather wasn’t great. It was cloudy six of the seven days with periodic rain ranging from showers to tropical downpours. But it was hot—in the high 80s to 90s—so we had fun anyway. 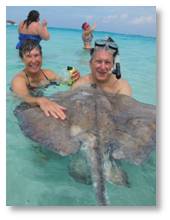 My goal was to snorkel a lot and eat a lot of fish and salad and I succeeded on both counts. We were in the water every day, watching the fish in various places along Seven Mile Beach as well as other locations. On the one sunny day, we took a boat trip out to snorkel along the reef on the north side of the island. On one side of the reef, the water is four feet deep. On the other it drops to 6,000 feet on its way to the Cayman Trench, the deepest part of the Caribbean Sea at over 25,000 feet.

We also stopped at Stingray City. This is a sandbar, not far from the reef, where stingrays congregate. Boats have been going there for 60 years so the rays are pretty tame. But they are big and there are a lot of them so you have to keep your feet on the sand to avoid accidentally stepping on a stinger. 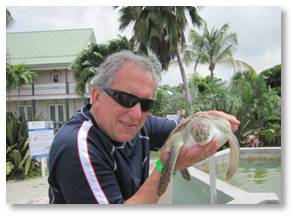 We also went to Pedro’s Castle, the restored historical building where the government of the Cayman Islands was written, the Queen Elizabeth II Botanical Gardens, and the Cayman Turtle Farm which has bred and released over 35,000 green sea turtles into the wild. The breeding stock is enormous with shells the size of my desk but they only release the yearlings because they still have the instinct to forage in the wild.

And we ate. The restaurants on Grand Cayman are excellent even in the off-season. Although some were closed last week for cleaning and refurbishing before the high season starts in November, enough were open to offer a good variety. I had grouper, wahoo, shrimp, snapper, lobster, sole, and conch in various forms and recipes.

Because it was off season, we did not have to worry about reservations and could just walk in to get a great table on the water. I really enjoy sitting outside on a warm night and watching the sun set while tall tropical clouds parade across the horizon and the riding lights on buoys and boats wink red and green on the water. 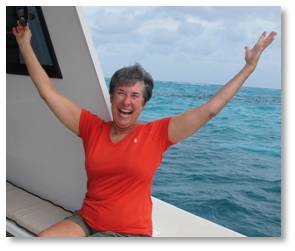 Heading Out to the Reef

Snorkeling the reef was great because of the beautiful corals and large fish—much bigger than what you see closer to shore. But it was right off the beach behind our resort where we encountered the most exciting creature.

I was watching a three-foot tarpon (who was watching me right back) when Seth pulled my flipper. I turned to see a huge, graceful black shape emerge from the blue distance and sweep past us like a Klingon Bird of Prey. It was a manta ray with a wingspan of about six feet, “flying” along the undersea rocks with silent grace.

We tried to follow but she (the big ones are female) didn’t like that and left us behind with two strokes of her huge wings. Seth didn’t even get a picture but we were both struck by the unexpected touch of wildness that makes you feel privileged to have seen it.We came home from our week of extended summer to find that fall had truly arrived. The air is crisp, the sunlight brilliant, and the trees turning from green to red. I’m back at my desk, refreshed and ready to keep writing.