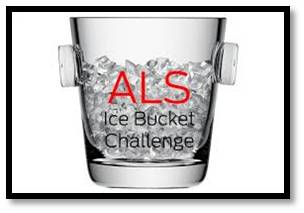 Take a bucket filled with water and ice.  Create a video of yourself pouring the ice water over your head in the name of ALS awareness, with the hashtag icebucketchallenge to encourage donations for research.   Post the video on your Facebook page with a shout-out challenge to your friends, who must respond within 24 hours.  They do.  Retweets of the hashtag have surpassed 400 million.

Thanks to a bucket of ice water and a viral social media campaign there are 740 thousand new donors to ALS research.  Among them are former Presidents and politicians, a cross-section of celebrities and ordinary people everywhere; all of whom helped the ALS Association double its donations in one month with their social media connections.

Time magazine reported that in one day the challenge earned the association $8.6 million—and that’s not pocket change.  This simple act, paired with social media, has elevated fund raising to new heights.  Even the ALS Association can’t explain it except to say it’s an unprecedented awareness campaign for a disease that’s difficult to explain.  Unlike many campaigns to fund and find a cure, ALS has no survivors.

This is the power of social media put to powerfully good use.

Social media sites like Facebook, YouTube, Twitter and LinkedIn consistently rank among the top ten websites.  All of them wield great power to promote positive as well as negative topics and have a profound impact across all aspects of our lives.They keep us connected, informed, curious and empowered.  They have proven themselves as powerful communications tools and fundraisers through their ability to create an emotional investment for the viewer.

Social media is the most powerful form of marketing and market research the world has ever seen.As a marketing tool it is unsurpassed.  Scott Cook, Founder & Chairman of Intuit reminds us that, “A brand is no longer what we tell the consumer it is—it is what consumers tell each other it is.”   Businesses today believe social media is a mandatory aspect of day-to-day operations.

Customers like me look for a social media presence when considering a purchase. We can’t afford not to since 93% of marketing professionals are using social media for business.  Companies have social media budgets and departments.  Consumer-based businesses invest in full-time employees whose only job is to monitor and respond to customer feedback provided on social media sites.

Even though many people still refuse to embrace social media, these sites have become the platforms of the information age.   Today there are over two billion people on 300 major social networking sites around the word.  That means one in four people are using them.

Ten years ago when he was a student at Harvard, Mark Zuckerberg developed Facebook for use in the university; with no plans for it to leave the campus.  Today it has surpassed all of its competitors and is used by 750 million individuals and corporations around the word.

Today, 47% of consumers say Facebook has the greatest impact on their purchasing behavior compared to only 24% in 2011.  If you doubt that power, check out websites like Trip Advisor and Yelp  where many a dissatisfied customer can be heard loud and clear.  Job searching?   Glassdoor throws a harsh spotlight on negative work environments, bad CEOs, and industry salaries.

Professionals turn to LinkedIn to connect with others in their industry.  Every two seconds LinkedIn gets new members who participate in groups, blogs, job listings and conversation.  It is rich with information and networking opportunities.

A quick look at the stats shows just how integrated and connected we are.  It’s no surprise that a grassroots movement to raise public consciousness can generate momentum and create a tsunami of awareness and fundraising in less than 30 days.

Social networks span geographies and time zones, offering everyone the ability to collect and share information through the internet.  We have access to a diversity of information that surpasses all other information and research tools.  The things that once separated us are now as close as a keyboard or a mobile app.

Social media has changed the way we interact with each other.  The ice bucket challenge is an example of good social media gone viral.  It is not a fad or a phase—it’s here to stay.  Let’s keep the momentum going.

I encourage—no I challenge you—to find a cause that you are passionate about and promote it through your social networks to raise awareness and support.  Use your voice and your posts to make a difference.    Public awareness often depends on our ability to generate attention and create opportuntiies for organizations to spread important  information to people interested in helping or donating.

We live in a virtual world.  Many wonderful organizations benefit from a well-written post that can educate, ignite interest, and aid a good cause.