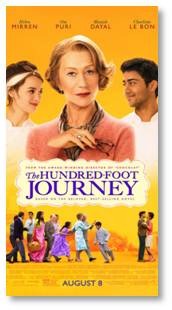 The Hundred-Foot Journey is a welcome addition to the small group of movies about food and the even smaller group of good movies about food—along with other things.  In this charming little movie, those things include life, love, family, growth, taking a risk, opening oneself up to new things, and getting to understand what’s truly important in life.

Like Chef, this year’s other good foodie movie, @100ftJourney starts with a disaster and then sends its characters out on a journey of discovery. In this case, both the disaster and the journey are far more daunting than they are in Jon Favreau’s film. When the Kadem family sees its livelihood in India go up in flames, they move to Europe to find a new start and end up in France. Bringing ethnic food to the heart of French cuisine would be a challenge for even the greatest chef and it takes a father who refuses to accept defeat to pull it off.

The Hundred Foot Journey is a charming and engrossing movie that pulls you right in and has you rooting all the way through for the Kadem family and its culinary star, Hassan. Helen Mirren is wonderful in the role of Mme. Mallory, who owns Le Saule Pleureur (The Weeping Willow), a Michelin-starred restaurant just across the street. She is so stiff and contained she might as well be covered with chaud-froid sauce. Om Puri is more than her match as Papa Kadem, a patriarch who wages war on Mme. Mallory with relish and a wicked smile.  Manish Dayal plays Hassan, the humble but persistent “cook” who dares to stretch his wings and learn new ways to prepare food, from the classical to molecular gastronomy.

A Passion for Food

Some of the critics have sniffed at what they term “false sentiment” and call the film “conventional and predictable.” Well, so what?  Yes, the movie is light and charming. Yes the little village looks improbably like the one in the animated sequence that opens a Disney movie. Yes, the lovers are restrained and less passionate about one another than about the food.  This movie is still a lot of fun and far better than the typical Hollywood offering.

One could also say yes, it has no guns, no swearing, no sweaty naked sex, no drugs or drinking (beyond a glass of wine, that it), no blood, no rape or murder, no terror. That makes it even better in my estimation. Why is food deemed less interesting than guns or drugs?  We all eat every day and most of us enjoy eating well.

And if the characters’ passion is expended on the food, then it makes the cooking even more believable. I have seen a number of films that were ostensibly about food but where the act of cooking has been performed with so little energy or interest that it was hard to believe that the actor had ever held a knife outside the dining room. 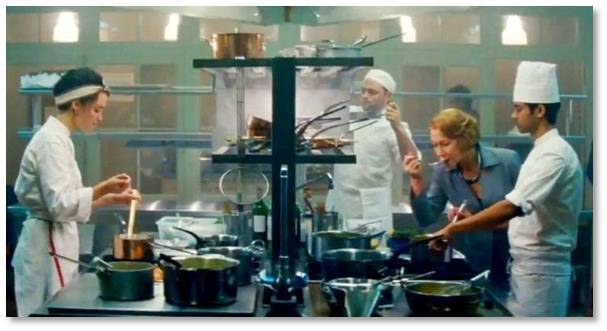 On the line at Le Saule Pleureur

Here you see glistening vegetables chopped with superior knife skills, soup stirred, eggs cracked, sauces whisked, chicken sautéed, and omelets flipped.  The characters taste food as if they really savor it and treasure spices like family heirlooms. What a pleasure to watch food treated with respect and appreciation. In far too many movies the characters are presented with food that they either ignore or push away as though the plate was piled with sawdust and pigeon droppings.

I recommend The 10 Foot Journey for anyone who enjoys movies about food, cooking, love, passion, growth and triumph over adversity. But don’t fill up on popcorn because you’ll come out of the theater hungry for something very good.

If you like to binge watch, movies about food give you something nourishing to binge on. Here is a list, in alphabetical order, of 20 movies about food and wine as well as movies that have some great food scenes. Pick your cuisine of choice and dig in.  (I don’t count the chicken-salad sandwich scene in Five Easy Pieces because, while it’s about food, you never actually get to see the chicken salad.  And Soylent Green, well, the less said about that the better.)