The freedom to vote is every American’s most valuable political right. 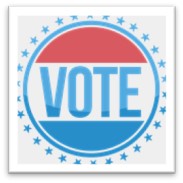 People who have gone before us fought long and hard for our right to vote. If you are a woman, a person of color, or any marginalized ethnic group, fearless defenders of your right to vote have protested, marched, suffered and even died so you can vote for the political parties and candidates you believe in.

Honor the memory of those who gave you this right by registering and voting in the November mid-term elections. The strength of democracy is built on the right to vote and when people do not vote—no matter the reason—democracy cannot happen. Eventually it weakens, begins to crumble and eventually disappears.

No matter which candidate you support in the coming elections, remember that the policies and people you are voting for will impact your life, the lives of your children and their children’s lives.

We have a responsibility to change the tone of politics.The November mid-terms are just around the corner. Make a difference and VOTE.

Americans are suffering from political depression. Voter apathy has reached a low point in people’s relationship with their government, creating a crisis of confidence in politicians and in the value of public service within our democracy.

Voter turnout across all ages has been declining. The United States now has the lowest voter turnout in the world, consistently below corresponding levels in other western democracies. In Italy, Belgium, Austria and Australia, more than 90 percent of eligible voters cast ballots at election time.

Young people today fall into the category of would-be voters. They don’t see the importance of participating in elections at any level and consciously decide not to vote. They claim they aren’t invested in politics, mistrust government in general, and have no interest in campaign issues or motivation to run for elected office.

Who can blame them? They have been shown one example after another of political corruption, partisanship and the inability to compromise. The future leaders of our country have a front-row seat on a Congress and White House incapable of working together on anything, even when their interests align. Political disintegration has replaced respect for political differences.

Young people are not alone. Older age groups feel the politicians elected do not represent the beliefs and values of their generation; finding no value in an election where they are unable to influence outcomes that will benefit them.

Voters aged 65 and older claim illness or disability as the primary reason they did not vote followed by an inability to get to the voting precinct. Both of these are easily remedied with local volunteer groups.

But topping the list is a belief among all age groups that politics is dirty business. Good people won’t run because they fear they will be forced to set aside their moral and ethical beliefs or otherwise comprise themselves to get elected.

Fear of investigative reporting, the power of fake news, and invasion of privacy turn many qualified people away from the political arena. There’s also the perception that wealthy white males from a politically connected families keep challengers, especially from minority groups, off the ballots.

Big money has never been more powerful due to the rise of the super Political Action Committees and the mega-donors that fund them. PACs are legally permitted to raise unlimited amounts of money from individuals, corporations, unions and trade associations.

They are allowed to spend that money on messages supporting the election or defeat of federal candidates. They cannot directly donate the money they raise to candidates and are not allowed to work directly with a campaign but the power of their money influences and discourages voters.

Six Reasons to Vote in November

America’s future, and therefore your future, hinges on voter turnout and here are six good reasons for going to the polls this November:

In case you think your vote doesn’t matter think about this: During Super Tuesday on March 1, 2016 one Massachusetts County had Bernie Sanders beating Hilary Clinton by one vote.

There are 215 million American citizens eligible to vote but only 153 million are registered. That means one in four Americans don’t vote. Those who don’t vote affect the outcome of public policy more than those who do vote. 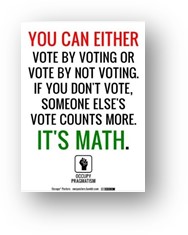 It’s easy to become pessimistic and apathetic by the current state of our government, which is why turnout at state, federal, and local elections is appallingly low. Yet every single person who opts not to exercise their right to vote sanctions all forms of undemocratic government with their silence.

Unless we want undemocratic governance, we can’t afford not to vote. Respect the legacies of those who fought so you could vote. It mattered to them, it should matter to you.

Your Vote is Your Voice.