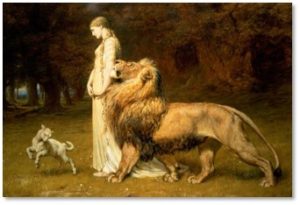 Una and Lion by Briton Riviere

True to form, March came in like a lion here in New England with four nor’easter storms in four weeks and is finally going out a lamb in a burst of bright, if cool, sunshine. By now, we could all use a bit less lion and a lot more lamb.

Susanne and I have had a lot to write about. A few of our posts touched on the issue of gun violence but dealt mostly with the rise of young people marching for their lives and making a big difference. It’s been a while — 50 years — since we had a generation of activist youth and I think it’s a great development.

With the daily and weekly swirl of scandals around the White House and the Trump Administration, it has been difficult to ignore politics. It seems like every day we have another Cabinet departure, another woman stepping forward to accuse the President, and another foreign policy alarm to deal with. But I only dealt with the one woman who got scammed by POTUS and doesn’t even seem to understand what happened. After 15 months of this, I think we could all use a lot less lyin’ and fewer politicians on the lam.

In other news, Africa appears to be splitting into two continents (geologically, not politically), a Chinese space station fell into the South Pacific, and the north magnetic pole is shifting. Lest we become complacent. Hah!

Before the world ends, here is the roundup of March 2018 posts. I was trying to put this out on Saturday, bake for Sunday coffee hour, and get some exercise at the same time. It didn’t work. Today is April 3 and it snowed again yesterday.

A Confluence of Holidays 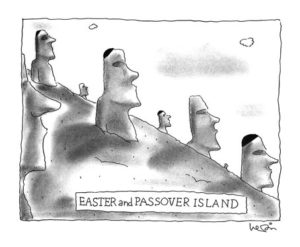 Last weekend we celebrated Easter, April Fool’s Day and Passover — an unusual confluence of holidays. But the baseball season has started and we finally can turn to a non-political, non-lethal, non-terrifying, diversion that will keep us from tearing our hair out.

And yesterday’s snow is melting. I can see my daffodil shoots and crocuses are popping up in Easter shades of gold and purple. Now that April is here, we can look forward to better weather.