In 1963 President John F. Kennedy signed the Equal Pay Act into law. Fifty-four years later, American women are still fighting to make as much money as men. Women have made progress—earning between 79 and 82 cents for every dollar compared to 54 cents earned prior to the Equal Pay Act.

The wage gap is gradually narrowing, thanks in part to women’s strides in education and market stagnation in men’s wages but, dollar-for-dollar, women still earn less. Why are we talking about this? Because analysts predict it will take at up to seventy more years to close the gender pay gap if the current laws remain in effect. That fact alone is disgraceful.

The definition of equality remains vague and elusive. That means the law isn’t (and hasn’t been) working like it’s supposed to.

Gender discrimination is again the law. Despite this fact women; and some men still suffer from bias and negative stereotypes. Women bear the brunt of the gender pay gap, with damaging opinions about their abilities, perpetuating issues like pay inequality, occupational exclusion and limited promotional and leadership opportunities. Jobs are still offered to a less-qualified male applicant just because he is male.

The glass ceiling is a term that refers to invisible barriers that prevent women from climbing the corporate ladder because senior-level and executive positions are given to men. Glass-ceiling policies are unwritten, generally denied, and often referred to by the more common old boys’ network. No matter what name it goes by, it’s gender discrimination.

Men in positions of power who believe in the inferiority of working women are unlikely to change their minds. They favor their male colleagues, and those colleagues get more time off and better compensation and benefits packages than their female counterparts and it is illegal. 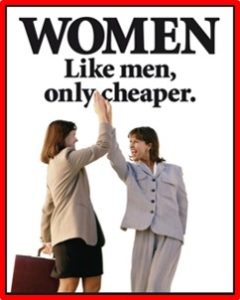 So how do companies get away with gender discrimination?

It’s easier than you think, because the equal pay act is a law hamstrung by a series of loopholes. The current law relies on individual victims of discrimination filing charges by enforcing a specific or individual contract. When they win their case, they only win it for themselves, often with a settlement that includes a gag clause. The individual may benefit, but the laws remain unchanged.

Loopholes buried in the EPA significantly reduce the law’s effectiveness and are easily exploited by employers. It allows for men to be paid a higher wage than their female counterparts on the basis of seniority, merit, productivity, and “a differential based on any other factor other than sex.”

This vague language makes it difficult for women to prove they were paid less than a male counterpart because of their gender and deters many from even filing a lawsuit. If they can prove their case, the EPA punishes employers by requiring them to pay two years of retroactive pay to a plaintiff. That is nothing more than a slap on the wrist and invites continued abuse.

Sunday, April 15, 2018 is Equal Pay Day.  Let’s take this opportunity to address the fact that we are still living with and talking about the gender pay gap. It’s time to truly close it and make this law mean something.

There are many reasons the gap is so hard to close, according to Olivia Mitchell, the director of the Pension Research Council at the Wharton School of the University of Pennsylvania. Three of the most significant are: the penalty women face for becoming mothers, women’s lack of negotiating skills and the bias women face from employers.

Even though Fortune 500’s newest list included a record number of female CEOs and statistics showing many single women in their twenties out-earning male peers, women still face tangible gender bias in the workplace. That record-breaking number of female CEOs was only 3.6 percent of the total.

Closing the gender pay gap means women must become more vocal about the change they want for themselves. Research supports Mitchell’s claim that women are less likely to negotiate their salary than men and are over represented in low-paying jobs. As one Harvard Business Review article notes, the problem may have more to do with how women are treated when they negotiate, rather than their confidence or negotiation skills. 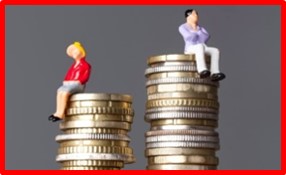 A recent Glassdoor study found that even when men and women with similar work experience and education levels were working at the same company with the exact same job title, women, on average, were still paid less.

Despite the assumption things would be equal, and despite federal law requiring men and women to be paid the same for equal work, researchers found that men made 5.4% more in base pay than female counterparts, and 7.4% more in overall compensation.

Employment laws need a major overhaul. We need a Congress that recognizes the gender pay gap along with a radical change in work culture. Corporations do not feel the financial sting of disproportionate pay scales and current legislation does not support true employment equality.

It’s a problem all of us own and it’s our collective responsibility to make the change happen now.