Following up on my previous post about fairy-tale movies, I watched with interest the box-office results for Jack the Giant Slayer, which opened on Friday of last week.  Despite a giant-sized budget of nearly $200 million, it racked up measly $27,202,226 over the weekend and has since added only $1,663,116.  The movie had ginormous expectations and a sizable marketing budget but the critics gave it middling reviews that were 52% rotten on the Tomatometer.  It’s looking like a big loss for New Line Cinema and Legendary Pictures.  The only bright light is that it won’t hit most of the major international markets until late March, which means it could return better results overseas.  So the question is, what will Hollywood learn?  Not being creative thinkers, the “suits” are likely to decide that fantasy (which they confuse with fairy tales) has run its course and they should stop making movies that aren’t firmly grounded in reality.  (Like, say, A Good Day to Die Hard. Right.)  Should that be the case, it will probably last only until The Hunger Games: Catching Fire hits the theaters.  With its huge fan base already in place and Academy Award-winner Jennifer Lawrence returning as the resourceful Katniss Everdeen, this second film in the franchise will likely gross as much as or more than its predecessor.  And The Hunger Games has so far brought in $407,999,255 with production costs of only $78,000,000.What the suits are not likely to figure out is that spectacular special effects can’t save an insipid story, style can’t redeem a lack of substance, and no amount of flair makes up for a flaccid script.  After all, they never have before. To the decision makers in Hollywood, more is always better, for everything except signing a good script writer.  Joe Morgenstern’s review in The Wall Street Journal said, “Jack’s problem is that he’s a commoner, but the movie’s problem is that its script is commoner still, an enchantment-free pretext for animated action, straight-ahead storytelling and ersatz romance.”  Morgenstern’s a reviewer I almost always agree with so we passed on paying to see Jack.The movie’s opening was so bad, in fact, that it was worse that the infamous flop last year of John Carter and only a slight improvement over Battleship.  Despite the savaging poor John took from the critics (only 51% on the Tomatometer), we saw it on the big screen because we read all the Edgar Rice Burroughs books when we were young and loved them. 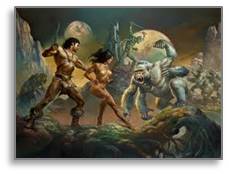 Undaunted by “uneven pacing” and “incomprehensible plotting,” we found John Carter quite enjoyable.  Having read the books, we knew exactly what was happening and found that the movie brought Barsoom, Burroughs’s version of Mars, to life quite well.  Now, at least, people can’t blame
The Giant Slayer’s poor performance on its star the way they did with the unfortunately named Taylor Kitsch.  Whereas Kitsch was relatively unknown when John Carter debuted, Jack was played by Nicholas Hoult, who is fresh off a terrific performance in Warm Bodies, a movie that did quite well with a gross of almost $62 million.
HG: Catching Fire isn’t being released until late November.  In the meantime, there’s plenty of science fiction in the pipeline for 2013 and The Host opens at the end of this month.  More on that later.If the studios were hoping that fairy-tale movies would provide fast-growing route to gold and riches at the box office, they got a giant-sized comeuppance this week.  Let’s see what they learn from it.