I have been thinking about death lately.

Maybe Susanne’s posts from last month sparked my thoughts. Perhaps it’s because I have been fighting a cold and have that light-headed, somewhat loopy feeling that comes with it. Or, like Susanne, the impetus might have come from a friend’s death before Thanksgiving, the recent news that a friend of many decades has been diagnosed with lymphoma, or my the approach of my late mother’s birthday. 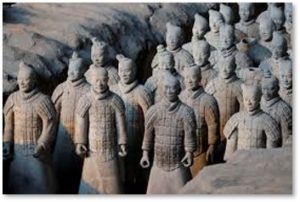 I have a longstanding mental vision of death and its approach. Imagine a crowd of people on a plateau, lined up in ranks by generation. Like the emperor Qin’s terra cotta army they move slowly forward, chattering and laughing, talking and crying.

When we are children, we learn about death but it is a remote event that happens only to other people. We stand so far back in the ranks, and so many other people crowd between us and the edge, that we can’t even see it. We know it’s there and understand we will get there, probably when we are old, but we don’t think about it at all.

As we grow to adulthood, we become more aware of the generational rows between us and the cliff. Still, our personal plateau remains so packed with grandparents, parents, aunts, uncles, and other relatives that we don’t concern ourselves with it.

Some people our own age get there first, though. Whether through drug and alcohol abuse (Jim Morrison, Janis Joplin, John Belushi), bad decisions (see The Darwin Awards), wars, disease, accidents, and natural disasters, these people leave their place in line and shove their way through the crowd all the way to the edge. They seem determined to reach it first.

Over the years, the ranks thin out and, with each death, we take one step forward after another. Great-grandparents (if you had any) leave first, followed by grandparents.
We grow older. Parents, aunts, and uncles take their place. Once you reach my age, few of those previous generations remain on the plateau. As they go, one by one, we take another step and realize that our generation now comprises the final rank with no one ahead of us. It’s a sobering thought.

For those of us still on the plateau, that edge seems sharp and final—the harbinger of a long, dark plunge to nowhere. It’s scary and it’s final. 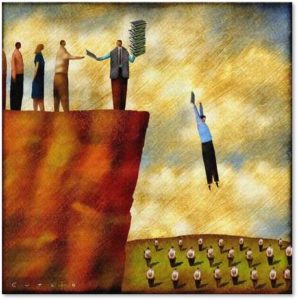 Here’s the big surprise, though. When we step over that edge, we don’t fall because there is really no cliff. Death is just a line that, while certainly final, does not plunge us into terror or extinction.

How do I know this? People who have had a near-death experience and been brought back to life emerge changed by the experience. The 2015 article “The Science of Near-Death Experiences” by Gordon Litchfield in The Atlantic gives a pretty good overview. The International Association for Near Death Studies, Inc. (yes, it’s a thing) defines a near-death experience this way:

“A near-death experience, or NDE, is a profound psychological event that may occur to a person close to death or who is not near death but in a situation of physical or emotional crisis. Because it includes transcendental and mystical elements, an NDE is a powerful event of consciousness; it is not mental illness.”

A more recent article, “The 10 Most Common Elements of Near-Death Experiences” by Stephen Wagner in liveaboutdotcom details the “components of the NDE that are part of the experience for a majority, or at least a good percentage, of people who have reported them.” He gives the top 10 characteristics as:

On the other hand, a friend who coded on the way to the hospital ER-style, with the doctor riding the gurney and pumping his heart told me that during his moments of death he experienced—nothing. How can this be? In his Vice article, “Near-Death Experiences have a Freakish Amount in Common,” Daniel Oberhaus quotes Charlotte Martial, a neuro-psychologist at the University Hospital Center of Liége.

“While near-death-experiences may have a universal character so that they may exhibit enough common features to belong to the same phenomenon, we nevertheless observed a temporal variability within the distribution of reported features. This raises significant questions about what specific aspects of near-death-experiences could be considered as universal—and what not.”

I prefer to go with the majority who have positive experiences.

To extend my personal vision, therefore, we take that last step and cross the line to find ourselves on a beach. Ahead we see a river with the brilliant light of love and acceptance on the other side. We can still see the people on what we thought was a plateau but now they are behind us on the shore of the river. The opposite bank is crowded with those who have gone before us: parents, family, friends, loved ones of all sorts. They are vividly clear to us but the people behind us, who have not yet stepped over the line, cannot see them at all. 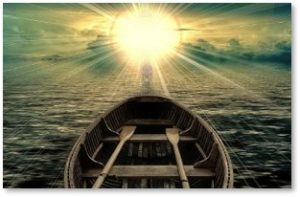 The people ahead reach out to us, offering their hands, smiling and urging us to join them. We step into a little boat (or maybe we walk on water) and move across the river. As we go, the people behind us dim and fade, becoming less and less important. Those on the far shore grow brighter and more vivid. When we reach it, we step out and are surrounded by their love and joy, by the bright light of forgiveness and acceptance. And we move on.

And Miles to Go Before I Sleep

Don’t get me wrong; I have no great desire to take another step and reach that river. While I am not afraid of it or of what awaits me when I cross, I still have much to do on this side. I have lessons still to learn, grand-daughters to teach, words to write, places to visit, miles to walk, and books to read. My goal is to reach age 96 and I’m decades from that point. I love this beautiful world too much to turn my back on it and I am far too engaged in life to want to leave it.

Still, when I wake up at night and think about the people on the plateau, I turn my thoughts to the river and the light. I’m not ready now but when I am the journey will be a good one. I hope it has been good for those who have left us recently. 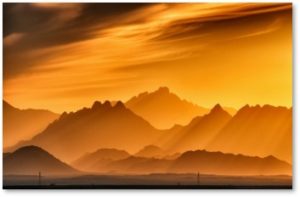 Some of them may have been surprised to see that peaceful river instead of a long and terrifying fall. People who live their lives denying the existence of any life after this one may need a while to adjust.

Others, frightened of Hell and eternal damnation, may keep their eyes firmly closed and thrash in a darkness of their own making against monsters that don’t exist. And some will simply lie there, passively awaiting something or someone to take over and help them. Everyone’s experience is different.

Wherever you are on the plateau of life, be of good cheer. While you can’t avoid stepping closer to that inevitable edge, you can lose your fear of it. The ones you miss so badly now will be waiting for you later. Take your time; don’t rush. Make the most of life and learn the lessons you need to learn until it’s time to move on.

Above all, don’t be frightened. There is nothing to fear.