For the second time in my life, a vaccine will be a game-changer. The first time was in the fifties when both parents and children lived in fear of poliomyelitis. Authors on The Next Phase Blog have written about this several times before. Now we look forward to a Covid-19 vaccine to help us return to normal.

Back then, vaccinations saved us from horrific diseases like polio and smallpox. We did not have the MMR vaccine yet, so we suffered through measles, mumps, chicken pox, and whooping cough. It did not occur to anyone that a vaccine was worse than the disease itself because we knew first-hand what those diseases could do. A preventive medication for polio came as a weight off our shoulders. 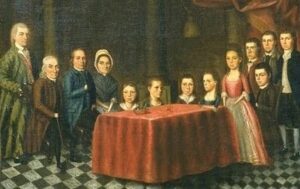 The family of artist Edward Savage 1779

In earlier centuries, people had it even worse. Parents had many children, playing the odds that some in big families would survive childhood. This was a dicey proposition for women, though, because childbirth was dangerous and often deadly. A man might well need several wives to provide that generational security.

Paul Revere had 18 children, nine with each of two different wives. Cotton Mather had 15 children with three wives and he outlived all but two of his offspring. Anne Hutchinson had 15 children all by herself and raised 13 of them to adulthood — an amazing accomplishment. 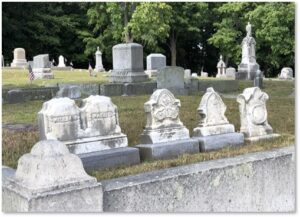 New England holds many old cemeteries filled with 19th-century graves. These include rows of small gravestones that mark the swathe cut through families by cholera, typhus, diphtheria, tuberculosis, rheumatic fever, and other diseases.

(Such burials were not as common in earlier centuries because people were not sentimental about death then. They often buried family members on top on one another.)

If weather has not eroded the marble Victorians loved to use, you can scan these small stones and note the dates and ages. When infants and toddlers died within months of one another, you can be almost sure an epidemic of some kind killed them all. Every one of those stones marks a family tragedy.

Now we once again look toward a vaccine to cut down on deaths and help the world return to a semblance of normality. This time, however, the anti-vaxxer movement is spreading lies and disinformation ahead of the approval of any one vaccine. Here are some facts about the status of a Covid-19 vaccine:

A Covid-19 vaccine won’t solve the world’s problem, of course, but it will contribute to protecting people and developing the herd immunity we need to get on top of the disease’s spread.

Living in an Abnormal World 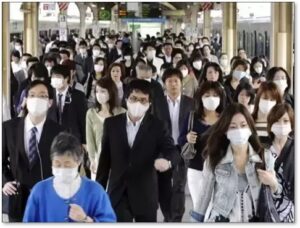 In a normal world, during a pandemic, everyone would be doing all they could to make us safe again. Mask-wearing would be accepted, as it is in many parts of Asia. People would voluntarily avoid large groups, especially indoors.

There would be hand-washing stations on the streets, so people could scrub away any contact without having to open a door. Hand sanitizer would be distributed for free and used by everyone.

A vaccine would just take its place as the next step in the line of protection. Both children and adults would line up to get their dose. There would be, as there was with polio, few arguments.

But this is not, as we all know by now, a normal world. Here in the US, mask wearing has become a kind of political litmus test with adherents of one party flaunting their bare faces and giving bear hugs.

Plus, the whole vaccine development process has become a petri dish for cultivating conspiracy theories. Anonymous conspiracy theorists and people looking to make a profit create and digest ridiculous “facts” about a prospective virus. Many of them claim proudly that they don’t “believe” in science. I see these messages online and in emails from people who think they have learned a secret truth.

I don’t “believe” in science either, but that’s because science does not require belief. If what you want is belief, look to faith and religion. Science gives us advances that improve health and increase our lifespan. 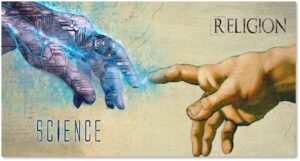 I have been accused of being part of “vax culture,” whatever that is. If it means trusting science to help reduce the number of Covid-19 cases and get us to herd immunity faster, I’m all for it.

Will whatever Covid-19 vaccine wins the race be perfect? No. Will it have a 100% effectiveness rate? No. Are there likely to be some problems? Yes. Will we have to renew it ever year? Maybe.

If being vaccinated means I can travel next year—and that other countries will let Americans in—then I’ll take the shot.

Going Back to Bloodletting

To me, turning your back on medical science means you might as well return to the miasma theory of disease, use leeches for bloodletting, send tuberculosis patients to sanitariums, and use mercury to “cure” syphilis. Believe me, if our parents and grandparents had been offered a vaccine that would keep their children alive and healthy, they would have jumped at it. And they would have thanked God for delivering their children from disease and death.

Had that been the case, all those sad rows of small gravestones would not exist.