Me: “I need a blog topic; something with strong opposing points of view…”

Dan: (studying to be a Physician’s Assistant) “Childhood immunizations. Light the fire Mom!” 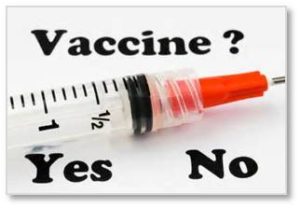 Today, children in the United States routinely get vaccines that protect them from diseases such as measles, mumps, rubella (MMR) polio, tetanus, diphtheria, meningitis and whooping cough.

Most of these diseases are at their lowest levels in history, thanks to early childhood immunization programs. But lately, the vaccination debate has gotten louder, with many parents on the fence or refusing vaccines altogether.

Ninety percent of the US population will vaccinate their children; which means twenty-eight immunizations in the first two years of life to protect against 14 different diseases. But today, many families are delaying the vaccines and wondering about the consequences of not doing it. Every state allows exemptions for personal and religious beliefs.

Until now.  The number of measles cases in the United States is climbing, igniting fears the disease is making a comeback. Two recent outbreaks, one in New York and one in California, are thought to be linked to the relatively low rates of vaccination in local neighborhoods. The virus is airborne, the worst kind of contagion. It’s spread by the simple act of breathing.

Pertussis or whooping cough is also on the rise. In 2012 over 50,000 cases of this highly contagious and sometimes deadly respiratory disease were reported, many in infants too young to receive the vaccine.

Opting Out  of Vaccine

Many parents opt out of vaccines they believe to be toxic or a catalyst for illnesses like autism and polio. In 2014, 3 percent of parents in California submitted personal belief exemptions (PBEs) to keep their children from being vaccinated. The U.S. national average in 2014 was 1.8 percent and children who are home schooled are not required to be vaccinated.

Childhood vaccination is an on gong debate between those vehemently opposed and those who insist they are necessary. Most vaccines produce immunity 90% to 100% of the time and a look at the history of any vaccine-preventable disease will show the number of cases starts to drop once a vaccine is licensed. Vaccine skepticism has created a higher risk of these diseases returning.

What is often lost in the vaccine debate is the fact that these illnesses are life threatening and have lasting health consequences. Vaccines remain the most effective way to put an end to them. When one child is vaccinated, that preventative step also protects the children and grandchildren of that child. An example is the smallpox vaccine, which is no longer given because the disease has been eradicated.

But for diseases that still exist, the CDC makes the argument that we need to vaccinate for the future or risk an epidemic comeback. Vaccine-preventable diseases are more serious for the very young and the very old but anyone can get them. It’s also important to distinguish between a shot that prevents a disease and one that reduces the risk of getting it.

A good example is shingles, caused by the same virus that causes chickenpox. If you’ve had chickenpox, the virus lies inactive in nerve tissue near your spinal cord and brain. Years later, it may reactivate as shingles. The vaccine reduces your risk of getting it but does not prevent you from getting it.

In the opposing corner, Dr. Andrew Wakefield published a report in the Lancet in 1998 claiming hard evidence of a link between autism, polio and the MMR vaccination. His findings turned out to be false, but they ignited a worldwide debate over the safety of inoculating children.  Although his writings were debunked and his medical license revoked, his influence against vaccines persists to this day, with many believing his research to be true.

Vaccine-preventable diseases haven’t gone away. The viruses and bacteria that cause illness and death still exist and can be passed on to those who are not protected.  Today people can travel across the world in 24 hours so it’s easy to understand how diseases can do the same.  One of the main reasons to get vaccinated is to protect others as well as ourselves. 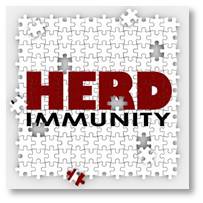 Herd immunity occurs when the vaccination of a significant portion of a population (or herd) provides a measure of protection for individuals who have not developed immunity.  When a high percentage of the population is protected through vaccination it is difficult for a virus or bacterium to spread because there are so few susceptible people left to infect.

The percentage of the population that must be immunized to achieve herd immunity varies by disease but the premise is that once enough people are protected, their immunity guards vulnerable members of their communities by reducing the spread of the disease. These include children who are too young to be vaccinated, people with immune system problems, and those who are too ill to receive vaccines. Their best hope of protection is that people around them have been immunized and cannot pass disease to them.

Much is written on this subject—too much to cover in a blog. Vaccines are not risk free but medicine is a balancing act of risks and benefits. I am not a risk taker when it comes to disease prevention. If I had to make the choice today, I would still vaccinate my children.

If you’d like more in-depth information this excellent PBS NOVA film, Calling the Shots offers a balanced perspective on the debate.

2 thoughts on “The Vaccine Debate”