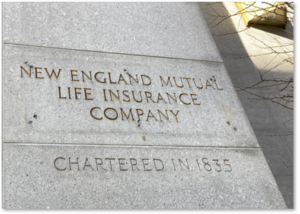 The New England Mutual Life Insurance Building at 501 Boylston Street occupies prime real estate in the Back Bay but most passers-by pay it little attention.

Although it’s large and set back from the sidewalk, the best view of the building now known as The Newbry, can be seen if you step away. In fact, one can only see its most distinctive feature, the clock tower with its gold dome, from a block or so away. Try the middle of Copley Square

The monolithic structure occupies two thirds of the block, replacing two older buildings, but the site’s history goes further back much further. It even extends well below the foundation. 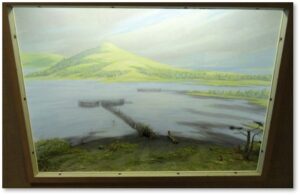 The Back Bay fish weirs with Beacon Hill in background

First came the Shawmut Indian tribe, the first occupants of what we now call the Shawmut Peninsula. They built fish weirs in the Back Bay when it was still a tidal body of water. The filling of the Back Bay buried those ancient weirs under tons of gravel but did not destroy them.

Construction of the Arlington Street subway station uncovered 65,000 wood stakes some 31 feet below street level. Analysis determined them to be part of an ancient fish weir dated circa 2,500 B.C. Further excavations in 1939, 1949, 1960, and 1986 uncovered other fish weir sites.

Once this block of the Back Bay had been filled in the 19th century, the City of Boston needed to attract people to live on the “New Land.” To accomplish this. they and the Commonwealth of Massachusetts, which owned this section, donated land to public institutions. The state, in a deed signed by Governor Andrews, gave the block bordered by Berkely, Boylston, Clarendon, and Newbury Streets to two organizations.

The eastern third went to the Boston Society for Natural History. The newly incorporated Massachusetts Institute of Technology acquired the western two thirds. To enhance the New Land’s character and value, the institutions agreed to erect buildings that covered no more than one-third of their land.

The first structures on the block appeared architecturally similar because they were both designed by William Gibbons Preston. On the eastern end at Berkeley Street he created the New England Museum of Natural History. 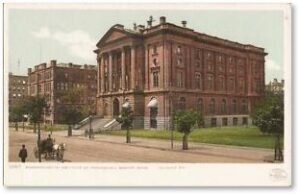 In 1865, Rogers Hall rose in the center to become MIT’s first building, planned as the first of three. MIT, then known as Boston Tech, was established to fill a need for a college education concerned with modern developments in science and technology.

Boston Tech added the Walker Memorial Building, designed by Carl Fehmer, to the west of Rogers Hall in 1886. It never completed the three-building campus block.

Settling Into the Fill

Although the foundations supporting Boston Tech’s buildings were designed and constructed in accordance with best technical knowledge at the time, they had problems. For the first 10 to 15 years the two buildings settled into the gravel fill at an alarming rate. This prompted stories that MIT students would someday enter the buildings on the second floor.

Although MIT moved to its current site across the river to Cambridge in 1916, Rogers Hall remained here until 1936, housing the School of Architecture. William Rotch Ware founded American’s first architectural school there. I find the juxtaposition of fish weir and William Ware interesting, if not significant. (Massachusetts also has a village named Weir and a town named Ware.)

In 1937, the MIT Trustees sold its two Back Bay buildings to the New England Mutual Life Insurance Company, the first mutual life insurance company in America, which was chartered in 1835. This allowed the company to move to the Back Bay from its original building in Post Office Square. The new owners demolished the Boston Tech structures in 1939 and began work on the first of two office buildings they would add to the block.

The architects avoided the settling problem that afflicted Rogers Hall by constructing it on a floating foundation. 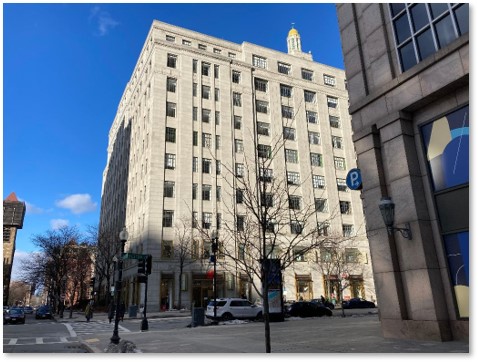 Although designed in the Art Deco style by Ralph Adams Cram’s partners in the firm of Cram and Ferguson, Mr. Cram himself disliked it. This comes as no surprise given that he was best known for designing in the more elaborate Gothic Revival style. Mr. Cram expressed such an antipathy to the design it inspired the poet David McCord to write a clerihew:

“Ralph Adams Cram
One morning said, damn,
And designed the urn burial
For a concern actuarial.”

The first building opened in 1941. The insurance company added a major extension in 1967. The decoration includes highly stylized references to colonial architecture that are best seen on the interior.

In another interesting connection, from 1914 to 1921, Ralph Adams Cram taught Architecture at MIT. At that time, he would have held classes in the Rogers Building next door to the structure he would later design.

The 10-story granite building has a main entrance with four enormous pilasters and two light wells. It included New England Mutual Hall, an auditorium that was widely used for films and live theatre from the 1940s to the 1960s. The company advertised performances and lectures in the Boston Globe and other publications. The structure has lobby entrances on both Boylston Street and Newbury Street.

From a distance you can see the clock tower rise from the roof with a lantern topped by a gold cupola. (The building is too tall to see the tower from the sidewalk alongside.) The tower originally served as a landmark in the Back Bay, although later construction has dwarfed its significance somewhat.

New England mutual merged with Met Life in 1995. Boston developer and real-estate investor Alan M. Leventhal founded this unit of Beacon Capital Partners. They purchased the building from MetLife in 2002. 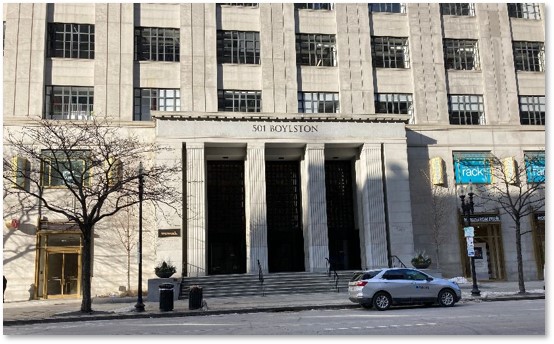 Their $60 million redevelopment turned the structure into a mixed-use property with 607,685 square feet of office space that opened in 2005. Later, the Boston Redevelopment Authority approved a plan to expand the retail component to meet a strong demand for shopping space in the Back Bay. Now known as The Newbry, the structure has modernized mechanical systems for the newly occupied floors.

The building’s high ceilings, internal lightwells and oversized windows provide exceptional natural light as well as dramatic views of the Back Bay and Copley Square.

From STEM School to Mixed-Use

Thus did the country’s first STEM school turn into high-end retail and office space. The lobby off the Newbury Street entrance also includes four detailed dioramas that depict the history of the Back Bay from fish weirs to the Natural History Museum.