While I don’t dare say that the pandemic is over or that we can relax our efforts to protect ourselves, we do seem to be getting out more. Slowly, cautiously, watchfully, we have begun re-engaging with friends, family, society in general and taking back our normal lives. The recovery my not be complete but it is certainly underway. 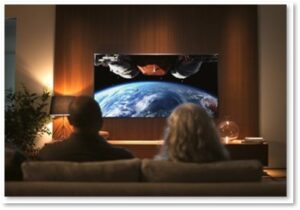 I’m singing in our parish choir again and attending services in person. We actually went to a movie theater to see the new James Bond film. (Aside from plot hole you could drive a truck through, it’s excellent.) The MLB championship series are taking place in crowded open-air baseball parks amid much shouting and singing.

Still, however, most meetings take place online, as do many lectures and other events where we used to gather in person. At night we are still watching more television than we once did. I continue to hear people ask for recommendations on good things to watch.

This month, therefore, I offer my Recovery Watchlist of recommendations for TV shows that we have enjoyed. (If you wonder why I didn’t recommend anything on Hulu, Disney+, Paramount, etc., it’s because we don’t pay for those services.

Some of these shows are serious and memorable while others are just fluff. You choose the genre, subject matter, and level of seriousness that appeals to you at your stage in the Great Recovery. For simplicity, I have arranged them in alphabetical order.

“In an economically devastated Pennsylvania steel town, a complicate and compromised chief of police (Jeff Daniels) is forced to decode how far he’s willing to go when the son of the woman he loves (Maura Tierney) is accused of murder. A harrowing journey into the lives of a small town with big secrets, where people are driven by loyalty, love, and desperation—and bad choices come far too easy.” 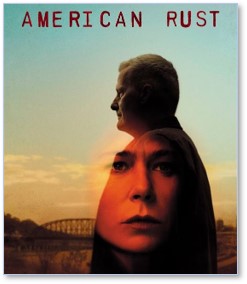 Hollywood has discovered the “lives of quiet desperation” lived by people who teeter on the knife edge of economic collapse. For the first time, dramas deal with parts of America that receive little help or attention from politicians at any level. American Rust follows on Mare of Easttown and Hillbilly Elegy in that regard.

Don’t expect pretty places to visit. Instead, we see run-down housing, empty factories, abandoned storefronts and overgrown farms. The drama comes from watching people try to live decent lives although poverty and the threat of imminent catastrophe hang over their heads. Recommended if you can handle bleak prospects and bad personal decisions. Some violence.

“When family man Nick Brewer is abducted in a crime with a sinister online twist, those closes to him race to uncover who is behind it and why.”

This show presents us with a crime that hasn’t happened yet but might if enough people watch an online video clip. The family bites its nails as the number of “watchers” goes up. The crime forces them to examine everything they thought they knew about Nick as a husband, co-worker, brother, and friend. Every episode in this limited series is told from the point of view of a different character. Recommended if you like complex plots. Some violence.

“In 1946 Berlin, an American cop searches for his missing brother while helping a novice German policewoman fight the violent crimes engulfing the city.”

This is a fascinating look at post-WWII Berlin, a city reduced to rubble. The limited series combines a war movie and a spy movie with an ongoing criminal investigation and throws in a little romance. It’s intense, complex and fast-paced. Recommended despite a medium level of violence with some gruesome scenes.

“Neurosurgeon Robert Henderson and vascular surgeon Randall Kirby set out to stop the brilliant but sociopathic Dr. Christopher Duntsch whose patients leave his operating room either permanently maimed or dead; inspired by the terrifying true story.” 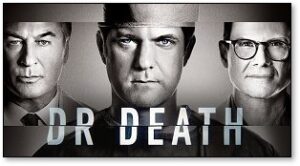 Although I was ambivalent about whether this would be worth watching, the show pulled us in and kept us engrossed. Excellent performances by Alec Baldwin, Christian Slater and Joshua Jackson bring the truly horrifying true story to life.

At the same time, the show exposes the reluctance of the medical establishment to police itself, instead engaging in denial and CYA efforts to protect the establishment. Highly recommended. No violence but some medical closeups. Warning: do not watch this show before having spinal surgery.

“Set in the world of beautiful but bleak Cape Cod, one woman’s journey to sobriety is overshadowed by a murder investigation dragging her into its fold.” 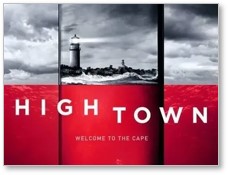 Lest you think that lives of quiet desperation are limited to the Rust Belt, this series takes place on Cape Cod, mostly in Provincetown, which no one would ever accuse of being bleak. But drug addicts and alcoholics exist everywhere, even in the midst of vacationing beachgoers.

The intriguing part—which doesn’t get enough air time in my book—is that the protagonist is a federal officer for the National Marine Fisheries Service. I found those scenes to be the most engrossing.

We don’t get Starz anymore but Season 1 is available for free and that’s what we’re watching. Recommended with qualifications. The sleaze can wear you down. Some violence (so far).

“The Humboldt Current is part of a much larger system, the South Pacific Gyre, and the equator as its uppermost limit.”

This is a nature show: beautifully photographed with gorgeous scenery and amazing shots of marine-animal behavior. It purports to show the journey of a female Great Blue Whale from the Antarctic feeding grounds to the northern Pacific where she will either mate or give birth. (It’s a mystery.)

For some reason, however, HBO Max has decided to stream only two episodes, leaving the enthusiastic viewer of this Pacific Ocean drama high and dry. Why? Who made that decision? It’s another mystery. Recommended with qualifications. You might want to wait until the rest of the series streams. No violence. Some sharks.

“Slipped a fatal poison on her final job, a ruthless assassin working in Tokyo has less than 24 hours to find out who ordered the hit and exact revenge.”

This is a movie, not a series. Once I started, I finished although the level of violence hit the top of the chart. The plot keeps us intrigued by teasing who is really the good guy, who is the bad guy, and who do you trust—or not. Woody Harrelson must have had fun with this. Sort of Recommended but watch out for maximum violence. Really.

“The arrival of a charismatic young priest brings glorious miracles, ominous mysteries, and renewed religious fervor to a dying town desperate to believe.” 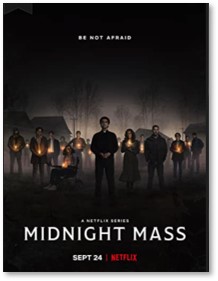 When this show first appeared, I was afraid it would be another anti-Catholic screed like The Young Pope, but no. Midnight Mass gives us a lot more than smarmy Cardinals, gratuitous sex, and back-corridor Vatican politics. Unfortunately, I can’t say too much without giving away some of the plot and spoiling the suspense. Suffice it to say that the charismatic young priest is not what he first appears to be and his miracles have a price. Recommended. More suspense than violence until the last episode.

“Realtor Nick Roman and an elite team of specialists handle the cases that no one else can: haunted and possessed houses that literally scare would-be buyers away.”

If you are a real-estate agent or have bought or sold a house recently, you might find this show funny. It brings a light touch to the subject matter sprinkled with some tongue-in-cheek humor. The first episode is the best. Recommended if you enjoy a little paranormal spice in your life. 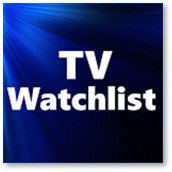 If none of these shows and movies catch your fancy, check out my previous watchlists for more suggestions and recommendations on shows to aid your recovery. You might find something more to your taste.