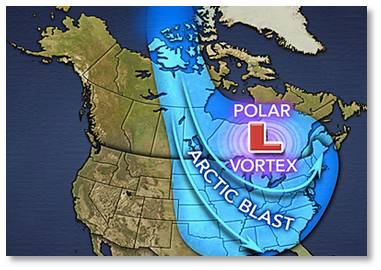 The current impact of the polar vortex, a super-cold and very dense air mass that forms near the North Pole but recently flowed south to cover most of the country, reminded me of a presentation I heard many years ago.

Given by former NASA meteorologist Tom Wysmuller, it was entitled “The Colder Side of Global Warming.” The core message: Keep your eyes on the Arctic Sea because what happens there can change world temperatures–and global warming will be the catalyst.

Mr. Wysmuller’s presentation gave a concise but informative tutorial on a meteorological term called a “fetch.” The fetch is defined as, “The distance over which a wind of nearly constant direction has blown, usually over a consistent surface such as water or a forest or a field.” Most explanations of the fetch, particularly those regarding maritime activity, are concerned with the wave height and speed generated by wind. But that wind also picks up moisture as it travels across open water, which is warmer than the air. This moisture turns into snow, which is then deposited on land in a phenomenon we know here on the East Coast. as “lake-effect snow.”

The Wall Street Journal : In Upstate New York, It’s Much More Than the Polar Vortex

Sometimes it is also “ocean-effect snow.” This occurred during last week’s nor’easter here in Massachusetts. Normally, temperatures along the coast are warmer than those inland because the ocean moderates air temperature. So inland areas, like where I live, typically get more snow than coastal communities. In last week’s slow-moving storm, however, the fetch picked up moisture from the ocean and dropped it right on the coast, creating blizzard conditions there when, only 25 miles away, we received just a few inches. 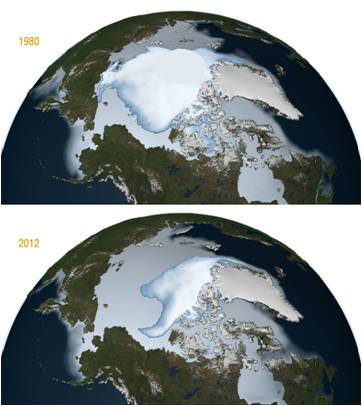 Keep Your Eye on the Arctic Sea

So what does all this have to do with the Arctic Sea? This large body of water at the top of the world has been frozen for most of recent history but is now melting due to climate change.

The rapid loss of Arctic Sea ice creates larger and larger areas of open water and that water is warmer than the air by definition. (Otherwise, the water would be frozen.) The open water is also darker than the surrounding sea ice, which allows it to absorb sunlight instead of reflecting it back, as white ice does. That warms the water further.

The Arctic Fetch and More Snow

Because of global warming, more of the Arctic Ocean will be exposed for longer times before seasonal pack ice forms and seals it up. That means the winds blowing over open Arctic Sea water can pick up moisture. When those winds hit the land surrounding the Arctic Circle—Siberia, Alaska, Greenland, Scandinavia, Iceland, Canada—they are going to drop that moisture in the form of snow. Snow will fall earlier each year, in larger amounts, and linger on the ground longer into the spring. Think over 200 feet of snow per year: that’s lake-effect snow on steroids.

Do you think that’s an exaggeration? Redfield, NY, has recorded 211 inches of snow just since Thanksgiving and will likely hit the 20-foot mark by the end of this week.  That’s from Lake Ontario–a  much smaller body of water.

Around the Arctic Circle, that much snow won’t just melt over the course of a short northern summer. When it doesn’t melt, it will pile up and when it piles up it will form a permanent snowpack. That leads to glaciers either growing or re-forming. And the increased mass of white snow and ice will reflect solar heat back out into space, which cools things down even further. Are you following this pattern? Can you see where it leads?

Here in the U.S., we are experiencing the polar vortex for the first time, but Europe felt it during the winter of 2010-2011, when winter arrived early, temperatures plummeted to record lows, and snow fell in unusually high quantities as well as in locations that don’t normally experience it.

When I saw The Colder Side of Global Warming, over 10 years ago, the warning sounded logical but not immediate. Now others are beginning to catch up with Tom Wysmuller’s presentation.

Where Do We Go From Here? 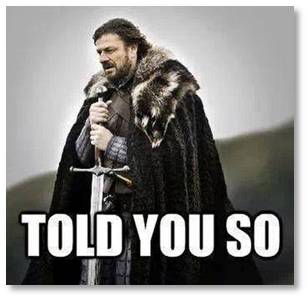 Where is global warming taking us? Where does this climate trend end? It looks like we’re going to find out the hard way—because there’s no alternative.

And Eddard Stark might just have the last word for us: