The oval windows have always attracted me.

I turn the corner from Charles Street onto Beacon Street pretty regularly. When stopped at the light, I find myself admiring those windows in the building on the corner. Set into their beautiful carved stone frames, they have made me want to know more about the building. Who designed it? Why was it built?  Well, today I have the answers.

A McKim, Mead and White Building 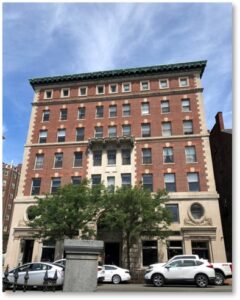 In 1890 the New York architectural firm of McKim, Mead and White erected this seven-story brick and granite building known as the Bachelor Apartments, the firm’s partner, Charles Follen McKim, designed it in the Renaissance Revival style. The Bachelor Apartments is one of a number of McKim, Mead & White buildings in Boston, but it is usually overshadowed by the firm’s more famous work.

In an interesting historical note, the late historian Douglass Shand Tucci states that Boston became the first city in the country (except, possibly, for New Orleans) to construct apartment buildings. Boston’s first apartment hotel, the Hotel Pelham, appeared at the corner of Boylston and Tremont in 1857. No such building rose in New York (meaning Manhattan, of course) until 1869.

The Busy Corner of Beacon and Charles

I have often thought this building doesn’t get the attention it deserves. Because this is such a busy corner, pedestrians pay more attention to counting down the light so they can cross. Or they check oncoming traffic to see if it’s safe to jaywalk. (Probably not.)

In photographs of Beacon Street, the Bachelor Apartments building usually makes a partial appearance in the far-left corner with the camera shooting uphill. It goes unremarked in the captions, however. The “AIA Guide to Boston” doesn’t mention it at all, either in print or online. 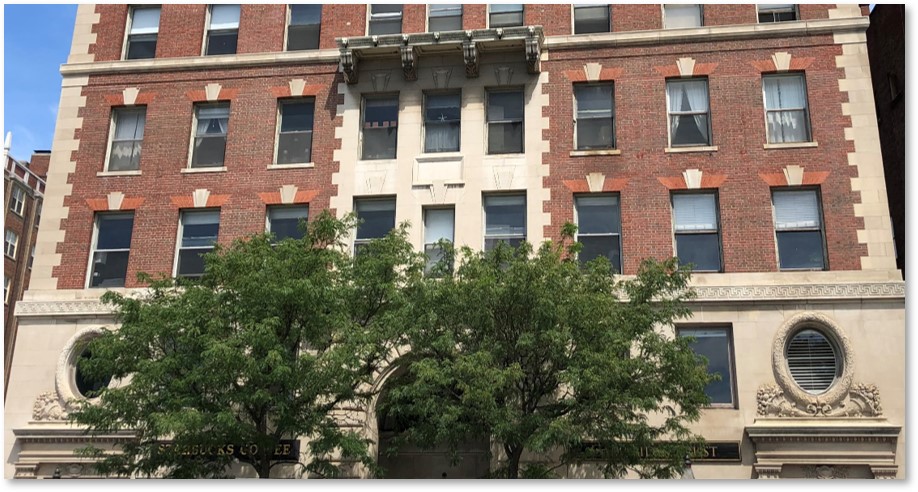 For all that, the impressive building stands as a prominent southern anchor of the Beacon Hill neighborhood as well as an gateway to the Charles Street commercial district.

The Bachelor Apartments was one of the neighborhood’s first modern apartment buildings. It also continued and extended the relatively new trend of fashionable apartment living. This new residential style proved attractive enough that most of the important architectural firms of the day jumped onto the trend. 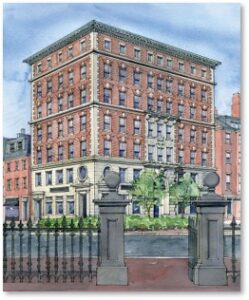 65-66 Beacon Street from the Public Garden

Apartments back then offered luxurious space and conveniences to their residents. They offered single-floor flats, as opposed to multi-floor townhouses. The residential units in the Bachelor Apartments are still beautiful, with many original features, and their rents reflect that today.

The Bachelor Apartments was most likely marketed to young men who were not yet married or established in a profession. Presumably, young women of good breeding did not require apartments of their own because they were expected to live at home with their families until they married. Young women of lesser breeding would not have been considered as tenants at all.

Young couples of means just starting out might also have taken an apartment here while their first home was being built. Those without family money to build them a home might have lived here permanently.

By the 1940s, however, the residents of the Bachelor Apartments had shifted to mostly  widows with just a few single bachelors living there.

The McKim, Mead and White Building

The Bachelor Apartments consist of 13 apartments in six residential floors over commercial space on the ground floor. Originally, the commercial space housed the grocery firm of Tighe and Burke. Today it holds a Starbucks on the west corner and a Cambridge Trust Company office on the east.

The first two floors are granite, topped by five red-brick floors with granite quoins on the corners. Granite string courses run above the second, fourth, and sixth floors. The one above the second floor is wider and more ornate, carved with interlocking Greek keys.

An interesting note is a granite frame between the second and third floors. This is where one might expect the architect to have carved the name of the building, or at least the date of construction. Unfortunately, the space is blank. 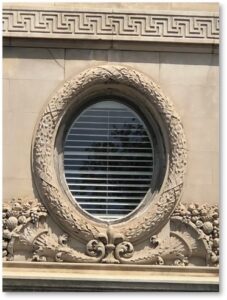 An oval window with cornucopias

Now for the distinctive windows: there are three of them, all on the second floor. Two appear above the corner doors to Starbucks  and one on the on the Beacon Street façade over the bank. Large and oval, they have carved stone foliate frames. A pair of beautifully carved cornucopias supports each window. These windows are graceful and elegant, just the kind of thing to attract the eyes of well-to-do tenants.

The building’s other windows, all rectangular for the first six floors, rise in rows, each topped by flat pediments with keystones. Those on the seventh floor are smaller, square, and framed in granite. A restrained copper chéneau crowns the cornice.

Stop and Look Up

The next time you’re waiting to cross at the corner of Charles and Beacon Streets, take the time to look up and appreciate the graceful architecture and stone carving of the Bachelor Apartments. You might miss the light, but it will be worth it.