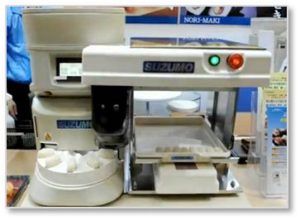 I can’t keep up with the announcements of new robots that do the work of humans. As I read the latest announcement of a robot sushi chef, three questions arise:

I would like to think of these machines providing the heavy lifting under human supervision, much as elephants once did in Southeast Asia. Unfortunately, however, employment trends indicate that machines will replace most of the humans altogether. A recent McKinsey & Co. study finds that automation could destroy 45% of the work currently performed in the U.S., which represents about $2 trillion in lost annual wages.A lot of buying power could go dark pretty quickly.

If you don’t want to take my word for it, read “The Brave New World of Robots and Lost Jobs,” by David Ignatius in the Washington Post.

For those who, like me, are visual learners, McKinsey has produced a color-coded chart that shows the propensity of jobs in different industries to be automated. You can download their chart in, “Where Machines Could Replace Humans and Where They Can’t – Yet”

What, Me Worry About Robots?

Not everyone agrees with the worries about automation, of course. Also in the Washington Post Robert J. Samuelson talks about “The Robot Invasion That Isn’t Yet Here,” and Steven Pearlstein urges, “Workers, Don’t Fear the Robot Revolution.”

I think both sides are right to some degree. Just because a prototype exists in a lab doesn’t mean that it’s economically feasible to produce it or for companies to purchase it. It also doesn’t mean that the robot can perform a job’s full function but might assist with some tasks. 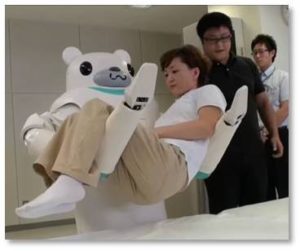 Many nurses, for example, would welcome the addition of a medical assistant robot to move people from gurneys to beds and beds to gurneys. This kind of heavy lifting has ruined the backs of dedicated nurses for decades and is something a machine can do more safely. It will take quite a while for a robot to perform the more skilled nursing functions, however, or to comfort patients when they are worried, confused or in pain. For that we still want the human touch.

Sometimes we find it difficult to remember how many jobs have already been automated. Armies of field hands once harvested wheat with scythes over many weeks of backbreaking work. Now dinosaur-sized machines do the same job in a fraction of the time, driven by one man sitting in an air-conditioned cab. Clerks once manually calculated numbers on paper spreadsheets in enormous ledger books. Now one person with a computer and Excel can do the same job.

On the Eve of Creative Destruction

The ever-growing robot army may mean we teeter on the cusp of another wave of creative destruction. This term, attributed to Economist Joseph Schumpeter, defines the continuous march of product and process innovation in which new production units replace outdated ones. Only in this case, the outdated “production units” are human beings.

“Improvements in agricultural productivity led to a wave of migration of farmworkers to the cities, where they provided the manpower for an industrial economy that eventually become so productive that we could afford to buy more health care, education and, yes, government.”

If the farm workers went into the factories, that solved one problem. But where have the airline counter agents, retail checkout people and travel agents gone? Some, like my husband’s aunt, lost their jobs to computerization and never worked again. Others retrained and started new careers. Does the employment problem associated with creative destruction reside with the economy, with technological innovation, or with the individual?

A Great Disturbance in the Work Force

Four differences between today’s situation and Mr. Pearlstein’s scenario occur to me, however.

Today, we have interstate highways, reliable trucks and SUVs, moving companies, and strong communications, yet people tend to stay where they are and where they have always lived, clinging to decaying communities long after the jobs have left.

In terms of jobs and the economy, we live in interesting times. This October we can angst over the new TV series “Westworld,” a reboot of the 1973 movie. That film starred Yul Brynner as the original Terminator—a robot that doesn’t do what he’s programmed to do and can’t be stopped. The show might help either to diffuse our anxieties or to serve as a harbinger of things to come.