We have bright angels of joy and dark angels of mourning. Some angels are forged in stained glass while others are carved in marble or granite. Musical angels sing hymns or play instruments and literary angels who write sacred texts or read manuscripts. In Boston we find two modern angels who celebrate the speedy passage of automobiles. 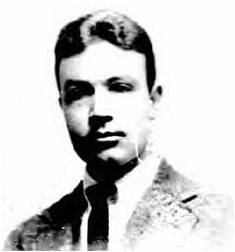 Opened on June 30, 1934, the Sumner Tunnel carried traffic in both directions for 27 years until the parallel Callahan Tunnel opened in 1961. It was named for William Hyslop Sumner, founder of the Massachusetts Horticultural Society and developer of Noddle’s Island in Boston Harbor. It carries cars for a mile and is more than 30 feet in diameter.

What does this traffic engineering have to do with angels? Well, you’ll find two of these celestial creatures above the decidedly un-celestial entrance to and exit from the Sumner Tunnel in East Boston. The bronze reliefs depict two angels, each holding a vintage roadster in her outstretched hands and flying in opposite directions. Their wings lift behind them and their hair and garments blow back from the speed of their passage.

The angels bracket a circular relief framed by oak leaves. Below this appears the dedication inscribed in bronze letters.

His creative work can be found in various New England towns as well as in cities around the country and in Europe. It includes architectural sculpture, medals, portraits, memorials, statues, nudes and animals. Mr. Coletti had a long and distinguished career during which he authored many books and articles, studied with the sculptor Aristide Maillol, and served for six years as Chairman of the Massachusetts Art Commission. Mr. Coletti died in New England in 1973 and is buried at Mt. Wollaston Cemetery in Quincy.

Mr. Coletti’s angels remain with us, though, and they are the perfect symbol for this time of year. The holidays involve much to-and-fro, hustle and bustle, and travel from one place to another. We rush in what feels like several directions at once, carrying things as we go.

Getting a Good View of Coletti’s Angels

Although finding Coletti’s Angels is easy, getting a good look at them is more difficult. Unfortunately, they get little respect. Highway signs block the ones at the East Boston entrance, placed directly in front of them. You can see the angels briefly just after 2:41 in this video. They also appear above the exit in the North End but that puts them directly behind cars leaving the tunnel, and thus invisible to passengers. 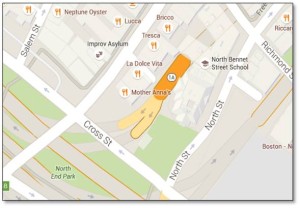 You will find the Sumner Tunnel entrance located near the T’s Haymarket and North Station stops on either the green or orange MBTA metro lines and commuter rail. A short walk will take you to the Administration Building.

Don’t try parking around here. If coming by car, park at the Boston Market garage or in the public garage at 20 Clinton Street. Then cross the Greenway to the corner of Cross and North streets.

The Sumner Tunnel is open all the time and viewing Mr. Coletti’s Angels is free.