When I set out to write a series of Advent posts on Boston’s angels I didn’t realize how few there were. This makes sense, of course, given the city’s Puritan origins and its rejection of all things that could be considered “Papist” or Catholic.  Those early Puritan churches were devoid of imagery, whether in paintings or statues. One of the few angel statues in the city outside of a cemetery is the Angel of the Waters, which is a non-religious memorial to a philanthropist.

Catholic Angels in an Anglican Church 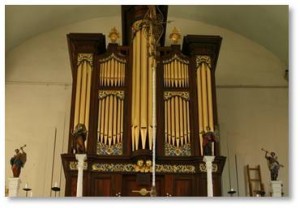 The angels around the organ. Photo: Atlas Obscura

That makes it all the more interesting that we find not one, but four angels in the church that is one of Boston’s most historic buildings. The statues, which are known collectively as Gruchy’s Angels, decorate the organ at Christ Church in the city’s North End.

Better known as the Old North Church, this is the oldest standing church building in the city of Boston. It is also where Sexton Robert Newman hung the lanterns that set Paul Revere, William Dawes, and Dr. Samuel Prescott on their ride to warn the citizens of Concord that British regulars were on the march.

These four, beautiful, ornate statues, carved from wood in what is now Brussels and painted in bright colors adorn the organ above a stark white Anglican sanctuary. How did they alight in such a place? To answer that question, we need to embark on a small history lesson.

The Puritan hold on Boston loosened in 1686 when its colonial charter was rewritten in the wake of the English civil wars. The Puritans were no longer allowed to refuse religious observance to members of other faiths and the Anglicans soon arrived in the city, establishing their first church at King’s Chapel. 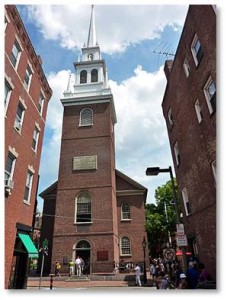 Christ Church on Copp’s Hill was their second house of worship, established in 1722. This structure had — and still has — a plain white interior, clear glass windows and simple chandeliers. No decoration or adornment with a whiff of the despised “Popery” was allowed. Despite its austerity , however, Christ Church housed a wealthy congregation and its members purchased pews that sold for £30 to £40.

Thomas Gruchy arrived in Boston from the Isle of Jersey in 1741 and purchased Christ Church’s box pew number 25. As an able mariner and son-in-law to a ship rigger, he was no stranger to ways of making money on the high seas. As a member of the congregation, he mingled with its upper-class merchants, traders, and nautical adventurers. In 1746, Britain and France were in the midst of King George’s War (1744 – 1748) and George II had given ship captains permission to capture foreign vessels during wartime. This provided Bostonians with an opportunity for profit.

Five of Christ Church’s members, including two of its wardens, pooled their resources and purchased a brigantine called the Queen of Hungary to serve as a privateer. At a time where there was no navy to protect the coastline, assigning letters of “marque and reprisal” mobilized privately owned armed ships and sailors to defend the colonies faster and more cheaply than commissioning those vessels into regular service as warships. Essentially, a letter of marque was a legal contract that gave a ship the right to raid and plunder specific enemy vessels in clearly defined waters. The upside was the possibility of making a considerable profit by selling the seized prizes and spoils. The downside was that privateers might be treated as prisoners of war by the enemy country if they were captured. 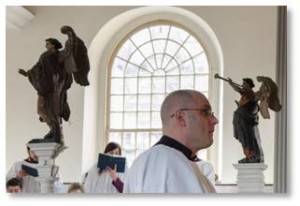 Thomas Gruchy, a 1/16th owner of the Queen of Hungary, was named her captain. He spent much of 1744 attacking French and Spanish vessels, making a profit for himself and the other investors.He returned to sea the following year, fighting the French off the New York Shore, where the Queen of Hungary took three French prizes.

In 1746 he was named a member of the church’s vestry and met with some of his business partners to decide on a gift to the congregation. This gift included, “. . . 4 Cherubims and Two Glass Branches Taken by ye Sd. Vessele.” There’s no record of which ship the angels came from.

Oral tradition tell us that the angels were bound for “New France,” or Canada, as a gift for a Catholic Convent but we have no documentation to support that. It’s a good story, though, and one that would have played well with the congregation.

The church fathers seemingly had no qualms about accepting either a privateer’s booty or such distinctly Catholic images. Although the angels are often described as stolen, they were actually spoils of war and thus perfectly acceptable. I’m not sure, though, how church fathers rationalized the second, given that the angels are unquestionably the kind of Catholic images that both Puritans and Anglicans decried as sinful and corrupt. 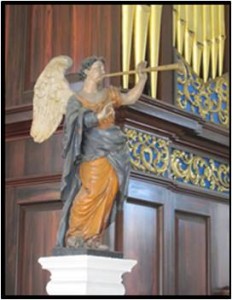 Regardless, they placed the angels around the organ on the church’s second floor, where the four heavenly figures have remained for 270 years.

Gruchy’s colorful angels stand in front of the oldest American-built pipe organ. They are approximately two feet tall and hold triumphant poses. Two of them blow trumpets while the other two welcome the faithful with open arms. You can see them there when you visit the church and they often highlight church tours.

The Old North Church is not difficult to find. It’s at the corner of Hull and Salem streets in the North End and is a stop on Boston’s Freedom Trail. The church’s white spire rises above the neighborhood’s brick buildings. It’s located near the T’s Haymarket and North Station stops on either the green or orange MBTA metro lines and commuter rail. A short walk will take you to the church.

Don’t even think about parking here, though. Seriously. The streets of the North End are narrow and crowded and what few spaces exist are for residents only. Park at the Government Center garage or in one of the private lots on Commercial Street. Then hike up Copp’s Hill. Just follow the steeple. You can’t miss it. 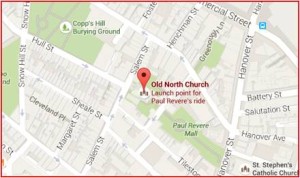 It’s free to enter the church but a donation of $3 per person is appreciated.