Boston has a world-class museum in the Museum of Fine Arts as well as notable collections at the Isabella Stewart Gardner Museum, the Museum of Contemporary Art and the Harvard Art Museums. 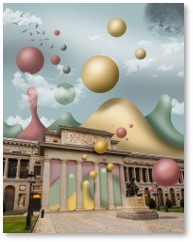 Fine art can be found in Boston outside the realm of these curated and climate-controlled galleries, however. You can see some of it easily, even from the street. Other pieces take some effort to locate. Not that they lurk in dark shadows, but they do hang in remote rooms and private collections.

In my new series—Art Hiding in Plain Sight—I will shine some light on these works and tell you how to find them. They range from contemporary abstracts to murals by American Artists, some were made as commercial decorations while at least one is a holy icon. Many take up a lot of room; others are small. Bright colors enliven some while a few artists chose black and white as the medium of choice.

All of these art works deserve more attention than they receive, not only for the artists who created them but for where they can be found. So, buckle up for the AHIPS tour, which I hope to roll out over the next few months.

The AHIPS tour begins with a colorful minimalist mural that can be seen from the sidewalk. Stand on the east side of Cambridge Street and look across to the entrance of #100. You will notice a band of brightly colored blocks stretching across the vestibule just inside the door. 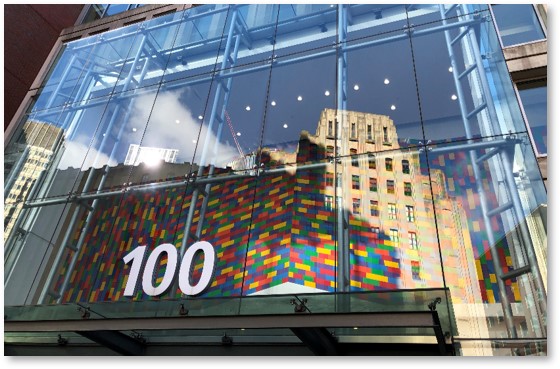 This work of art is Wall Drawing #1128 by Sol LeWitt, (1928-2007) a New York artist who is regarded as a founder of both Minimal and Conceptual art. His work emphasized geometrical shapes and repetitive designs, often in bright colors. 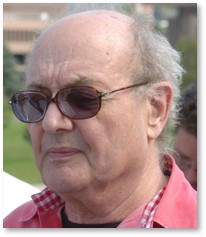 Unlike more traditional artists, who took up brushes and applied paint to canvas themselves, Mr. LeWitt created “wall drawings” that came with precise written instructions and diagrams. He made these drawings available to be painted in many places by different people. The artist did not need to be involved in their creation. Mr. LeWitt wrote that the artist’s idea “becomes a machine that makes the art.”

I wonder what the MFAs old masters would think of this idea. But then, they made a living from their work and didn’t give art away.

The mural includes vertical and diagonal broken bands of color and is painted in acrylic paint. Installed in June 2004, it covers three sections of the wall over the vestibule and stretches 60 feet wide. That makes it difficult to show in one photo. To get a better sense of the mural’s size, try this video.

The mural greets visitors to the building, also known as the Leverett Saltonstall Building, which was completed in 1965 as part of the Government Center Project. The firm of Emery Roth & Sons designed the structure in the distinctive International Style of architecture.

At 396 feet tall and 22 floors, it currently ties with One Devonshire Place and Harbor Towers at #35 on the list of Boston’s tallest buildings. This number changes almost daily, however, as new structures come on line. Soon, Boston’s steel-and-glass building boom will overshadow any structure lower than the Top Ten. 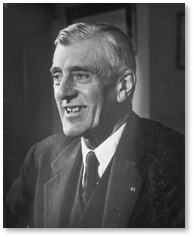 The building at 100 Cambridge Street, named for former Massachusetts governor and United States Senator Leverett Saltonstall, currently houses offices and a number of state agencies, including the Massachusetts Appellate Tax Board.

They would make an interesting pair: Senator Saltonstall (1892-1979) with his impeccable Boston Brahmin lineage and patrician demeanor next to Sol LeWitt, the son of immigrant Russian Jews who might be played in the movie by Wallace Shawn. I wonder if they ever met.

You won’t have any trouble finding Wall Drawing #1128 or getting a good look at it. As I said above, you can see it from the sidewalk. Find 100 Cambridge Street, which is right across the street from the old New England Telephone and Telegraph building. Look through the glass front of #100 and there it is. For a closer view, walk into the vestibule.

To reach the lobby, you have to walk up as well as in. That’s because the building sits on the eastern slope of Pemberton Hill. I wonder how many people who work there know that.