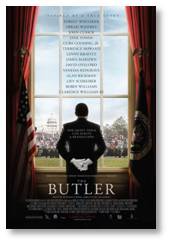 Finally, finally, this summer offers an intelligent, informed, insightful, and thought-provoking movie that’s designed for real adults to watch and enjoy. For that reason, Lee Daniels’ The Butler is, of course, not playing at the local Cineplex. We drove to another one that has a theater dedicated to “art movies” to see it with another couple.Let me be clear, LD’s The Butler is not an art movie. It is a movie about American history—the bad and good parts, its changes, growth, mistakes, and victories. It is a movie about the gaining of courage, the growth of wisdom and the triumph of the human spirit. It is a movie that thinking Americans can enjoy.

A Depiction of American Life

Let me also be clear that @butlermovie is a very entertaining and highly watchable film. It is not a documentary or political screed. It depicts American life, particularly that of black Americans, though the eyes and experiences of Cecil Gaines. The character of Cecil Gaines was based a real person, Eugene Allen, who worked as a butler in the White House under eight presidents, from the Truman administration through that of Ronald Reagan. You can read the real backstory of Mr. Allen in Aisha Harris’s story in The Slate: “How True is The Butler?”But that framework “based on reality” is only part of the story, just a lagniappe. The other part is how Mr. Gaines does his job, well and proudly, no matter how dirty or menial, as he watches one president after another struggle with policies regarding race relations and civil rights. He’s a black man watching white men make policies that will affect  him without being able to say anything. That’s the political view he sees looking outward. Looking inward, Mr. Gaines has to deal with a job environment in which black members of the White House staff are paid less and receive fewer promotions that white members do.

A Movie About Denial

In some ways, this is also a movie about denial, as Mr. Gaines compartmentalizes his life into public and private areas, allowing no cross-over despite the attempts of his wife, one son and her family to make him see otherwise. Given his lack of education and the solid (and prestigious) job he holds, one can sympathize with a man who will see nothing, hear nothing, and do nothing to jeopardize his livelihood.  It’s easy to criticize the character’s decisions, as several reviewers have done, but at lot harder to make those decisions in real life. Mr. Gaines’ son can afford to protest racial policies but the father cannot. 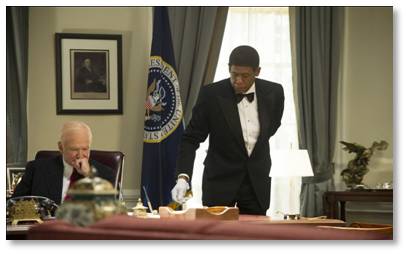 The film has an astonishing cast of actors both British and American, A-list and not, black and white. They all do an outstanding job, especially Forest Whitaker as Cecil Gaines and Oprah Winfrey as his wife, Gloria Gaines.

The script by Danny Strong is serviceable but not great; it lacks uplift and quotable moments. It’s easy to get caught up in the story, however, and follow the development from one administration to another, from Freedom Ride to Black Panthers, from proud dad to angry father, from illiterate field hand to presidential guest.

Who’s Behind the Mask

While Mark Jenkins in NPR’s review complains about “stunt casting,” part of the fun is discovering who’s behind Richard Nixon’s ski-jump nose, for example. After the movie, I wondered about the trend of European actors playing American presidents. First we had Daniel Day Lewis (Irish) playing Lincoln. Here we get Alan Rickman (British) and Liev Schreiber (raised in Canada) occupying the White House but I won’t say which presidents they impersonate. And then there’s Jane Fonda —still vilified as anti-American—playing Nancy Reagan.Lee Daniels’ The Butler earned a 72% Fresh on the Tomatometer and 83% of the audience (nearly 15,000 people) liked it. To date, it has grossed $24,637,312 domestically on an estimated production budget of $30 million. With good word of mouth behind it, The Butler should do very well.

NOTE:  No Republicans were harmed in the making of this movie.