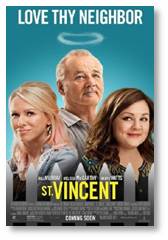 Veterans Day may seem like an odd day to post about a movie but there is a method to my madness.  As I’ve written before, the shoulder seasons of the year, spring and fall, are when Hollywood releases its lesser works, the ones not deemed big enough to be summer blockbusters or “significant” enough to make the holiday movie scene.

With December looming we’ll soon be offered a choice of Middle Earth, the Districts, ancient Egypt, the solar system, and Antarctica for big special effects and escapism of the highest order. Things tend to be a bit quieter in the spring and fall, Interstellar notwithstanding. (Yes, I plan to see it—and in IMAX if possible—but first I have to finish my last Dark Side of Boston tour for Boston By Foot on Saturday night.)

While a lot of dreck often fills the theaters in shoulder seasons, if you pick and choose carefully, you can find some little gems.  St. Vincent is one of those bright little gifts.  IMDB describes the plot as: “A young boy whose parents have just divorced finds an unlikely friend and mentor in the misanthropic, bawdy, hedonistic war veteran who lives next door.”  Reading that, you may think you know what’s going to happen but you would be (mostly) wrong.

First, the pairing of Bill Murray (Vincent) and Melissa McCarthy (Maggie) is terrific. No, they’re not a couple and there is no love interest and thank goodness for that. But it’s a pleasure to see Ms. McCarthy with a part that is worthy of her comedic talents, one where she doesn’t have to act like an idiot to get pre-programmed laughs.  Mr. Murray is perfect for the role, one which he plays with his patented droll insouciance.  Jaeden Lieberher (Oliver) gives us a charming performance as a boy sent to parochial school and trying to cope with a new school, a new house, a new divorce, and a new bully. Theodore Melfi wrote and directed the movie in a low-key, unassuming tone that’s a relief from Hollywood’s usuall ham-handed manipulation.

Of the school, all I can say is that parochial school has changed a lot since I attended one. 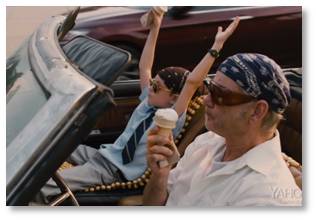 No seat-belts for Vincent and Oliver

This is not an unusual role for Mr. Murray, who has built a career on playing a curmudgeonly misanthrope. So now you’re thinking, “Oh, wait, this is the one where the adorable little kid reforms the old reprobate and he teaches the boy how to be a man.” Well, not so much.

While some teaching does go on, both directly and indirectly, much of it is probably not the kind of education you had in mind. Vincent is no saint. Oliver is a sponge, though, non-judgmental and eager to learn anything he can, especially if it will help him through his difficult days.

While Vincent steadfastly refuses to change his ways, his example shows Oliver what a man can be, both for better and for worse.  He also gradually reveals layers of his past and his personality to both Oliver and the audience in ways that change our initial—and far more disapproving—opinions.  Initially, for example, we think that Vincent has gambled all his money away only to discover that it has vanished down a totally different rabbit hole where the knee-breakers are far more gentle and caring but just as implacable.

The whole thing is a pleasure to watch. Speaking of which, I was delighted to see that it made this week’s top five box-office winners and has grossed $27.5 million on a production budget of $13 million.  That’s a sneeze in the face of the big tent-pole movies, animated kiddie pix, low-budget slasher flicks, and gorefests. But it is encouraging to see that a small film can bring in a profit. Critics gave it a 75% Fresh rating on the Tomatometer but audiences scored it even higher at 85% Liked.

I recommend @StVincentMovie highly to grown-ups who enjoy complex films about real people whose flaws and virtues are the kind with which we can identify.  Yes, you can wait to see it on DVD or TV and it will work as well on the small screen as it does on the big one. But then the studios don’t make the money that encourages them to create more wonderful movies like St. Vincent.