Want to know what more buildings in Boston’s should look like?  I saw one when I went to an alumni event at Northeastern University last month. 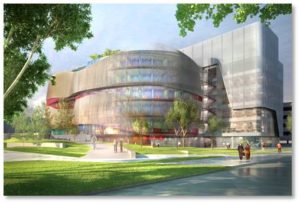 I looked out the window at a campus so big and complex I barely recognized it spreading out below me. Then I spotted  the starship under construction at the end of Forsyth Street along the MBTA tracks near Ruggles Station. Wow, what a knockout! I turned and asked what it was and learned that the new building was NU’s Interdisciplinary Science and Engineering Research Facility.

That meant doing a little research. The structure, along with a pedestrian bridge over the MBTA tracks, was actually designed by the architectural firm of Payette—which is located at 290 Congress Street right here in Boston.

My host could be forgiven for thinking the architects were Scandinavian, however, because the ISERF’s design looks far more cutting-edge than the safe, staid buildings that have gone up, and are under construction, in the Seaport District.

Curved, free form, gleaming and intriguing, this new academic building looks ready to take off on a five-year mission of discovery. It is as different from a cookie-cutter corporate glass box as one can get. Are you listening, fans of Elkus Manfredi?

According to News@Northeastern, the ISERF will,

“. . . house wet and dry lab facil­i­ties, edu­ca­tional lab­o­ra­to­ries, class­room space, and offices for fac­ulty and grad­uate stu­dents. It will fea­ture cutting-edge sci­en­tific equip­ment to be shared by researchers from Northeastern’s Col­lege of Sci­ence, Bouvé Col­lege of Health Sci­ences, Col­lege of Engi­neering, and Col­lege of Com­puter and Infor­ma­tion Sci­ence.” 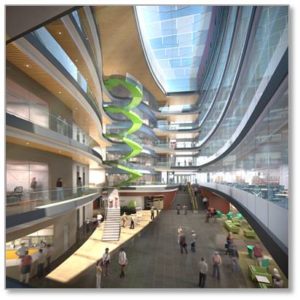 Because scientists from these different disciplines will be sharing laboratory space, Payette designed the interior floor plan to be flexible. Technically located in Roxbury, this site:

“provides an opportunity to strengthen the Columbus Avenue corridor, improve pedestrian connections, and create new open space and streetscape amenities to be shared with the surrounding community. The project represents an investment by the university of approximately $225 million.”

That’s a lot of bang for a big design buck. So if a university that once proliferated gray-brick rectangles across its expanding campus can produce such state-of-the-art design, why does the Seaport District suffer from a bad case of glass boxitis? Yes it’s true that those boxes and towers are very nicely done and professional with clean lines. The clients presumably approved the designs. And the buildings do glitter in the sunlight. 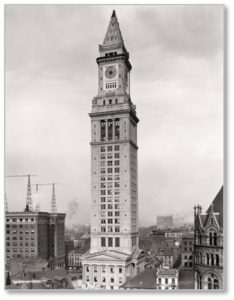 But still. With all that undeveloped land to fill, can’t we have the kind of building that makes people stop and ask, “What is that?” as I did with NU’s ISERF?  Where is the Seaport’s version of London’s gherkin (Foster and Partners) or the shard (Renzo Piano)? Where is a building as instantly recognizable for Boston as San Francisco’s Transamerica Tower (William Periera & Associates), Dubai’s Burj Khalifa, (Skidmore, Owings & Merrill) or even (good grief) New York’s AT&T Building (Philip Johnson)?

Sure, we have the Custom House Tower, — now a Marriott Vacation Club resort — but that went up in 1913. It remained the tallest building in Boston until the Prudential Center (Charles Luckman and Associates) rose to 52 stories in 1954, followed by the Hancock Tower (Henry Cobb of I.M Pei) in 1976. The Pru is essentially a tall glass-and-steel box, all right angles and tacky metal facing. The Hancock, which skews into a rhomboid and became an instant landmark, is glass from top to bottom.

A Blank Canvas by the Water

That was 40 years ago. The Seaport has offered us a blank canvas, a completely new section of the city that was previously dedicated to rail yards, wharfs and parking lots. Along with it comes the opportunity to create more signature buildings, more innovation, more “Wow!” structures that stop people in their tracks. 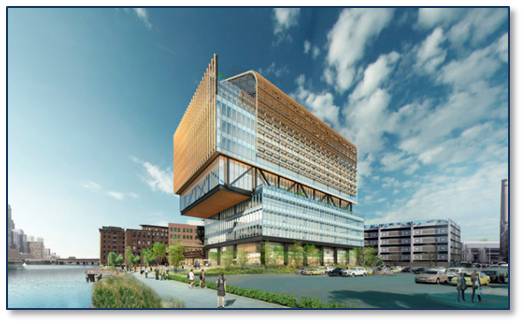 The good news is that General Electric has unveiled a design for its headquarters on the Fort Point Channel that takes the lid off staid commercial concepts. Designed by San Francisco’s Gensler (with a Boston office on Beacon Street), this 12-story building looks like it’s opening up at the top. Who know what will pop out? The design is innovative, bright, clean, and green. More, please.

Let’s have more creativity, more pushing the edge of the envelope, more controversy, more, “Wow.” More “How the heck did they build that?”

Taking Pride in Design and Style

Back in the nineteenth century, corporations and entrepreneurs took pride in structures that had style, flair and even (gasp!) decoration. They deployed statues and friezes, columns and pilasters, dentils and brackets, shields and medallions to the greater glory of commerce and their own reputations. A building’s beauty reflected on the man or men who had paid for it as well as the architects who designed it.

I have seen the future and it is at Northeastern University and GE. More of that, please.