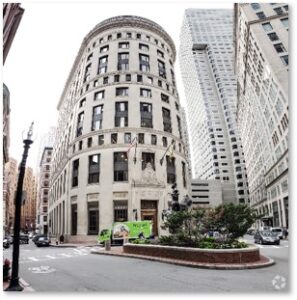 Given current world events, it seems appropriate to shine a spotlight on a small triangular space in Boston’s Financial District known as Liberty Square. This space takes its name from Boston history, and the French Revolution but also holds a memorial to a revolt against Russian occupation. What could be more timely?

With its sunlight and view of the sky, Liberty Square offers an open space in a crowded part of the city. The triangle formed by the conjunction of Kilby Street, Water Street, and Batterymarch Street allows human beings to step out of streets shaded by skyscrapers and take a deep breath.

Prior to the Revolutionary War, this area functioned as a center for businesses owned by British Loyalists, or Tories. These included two important 18th-century establishments. The British Coffee House, a favorite watering hole for Tories, became famous for a 1769 brawl between James Otis and British customs officers. In that altercation, Mr. Otis suffered a severe head wound that caused him to withdraw from public life. 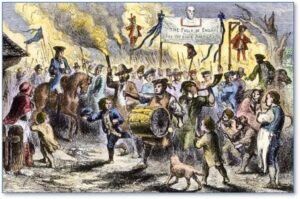 The Liberty Square area also held the prospective office of the King’s Stamp Act Commissioner, This loyalist neighborhood was a natural location for the King’s stamp master to pursue his business. When the government put up a building there, people believed it was intended as an office for Andrew Oliver. Oddly he was a man who didn’t want the job and never actually held it.

The building drew the attention of the Sons of Liberty, however, who burned it on August 14, 1765, as a part of the Stamp Act Riots. These were city-wide protests against the hated Stamp Act. They went on to demolish the home of Lt. Gov. Thomas Hutchinson, who was Andrew Oliver’s brother-in-law.

When George Washington first entered Boston after the lifting of the British siege, he went along Kilby Street and past the burned-out office on his way to old Fort Hill. 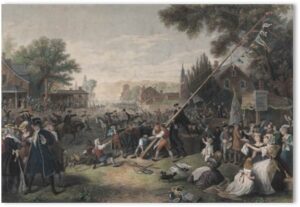 In 1793 Boston’s citizens erected a 60-foot “Liberty Pole here. It celebrated the news that the French people were on the verge of toppling their monarchy and thus win their own liberty.  A liberty pole is a wooden pole, or sometimes spear or lance, surmounted by a “cap of liberty.”

Boston held a civic feast in honor of the event. Author and historian Samuel Adams Drake tells us that Bostonians named this spot Liberty Square during that celebration.

In the center of Liberty Square stands a monument to the fight for freedom from oppression in yet another country. It marks the October 23, 1956 Hungarian Revolution. On that date, students began a short-lived fight against the country’s communist occupation. Assistance that had been promised by Radio Free Europe and Voice of America never arrived and it failed.

Thousands died in Hungary, while hundreds of thousands of intellectuals, artists, and supporters of democracy fled the country, to American cities, including Boston. The city’s Hungarian community gathers here every year to remember the revolution, and to celebrate Hungary’s freedom from the Soviet Union. 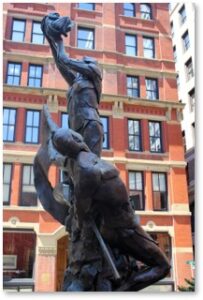 The Hungarian Society of Massachusetts commissioned the 18-foot-high monument by Gyuri Hollosy to commemorate the 30th anniversary of the 1956 revolution.

Made of overlapping sheets of bronze, it depicts a nude woman standing on a pile of rubble and holding her baby up to the sky. Amid the broken stones appear over 20 faces of the young students. A fallen soldier holds the Hungarian flag, The Hungarian revolutionaries tore the communist insignia out of the flag, leaving the hole represented in the sculpture.

Although originally dedicated on October 23, 1986, the memorial was dismantled in November of that year, and stored until May, 1989. The work was rededicated after Liberty Square Park’s plaza opened. 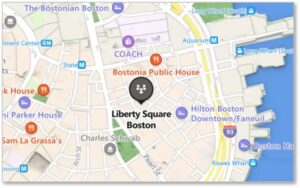 In 1989, Architects Earl R. Flansburgh & Associates designed the current land arrangement of the triangular 1,300-square-foot space in the middle of Liberty Square.

Many interesting Victorian commercial buildings from the 19th century frame this triangular intersection of narrow seventeenth and eighteenth-century streets. They deserve their own blog post at a later date.