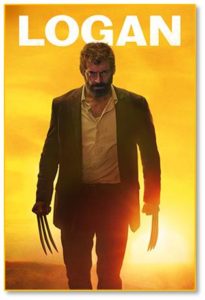 Friends have been asking what we thought of Logan, the final movie in which Hugh Jackman plays the eponymous mutant and member of the X-Men. I had a lot of thoughts about it both during and after the movie.

But first, here is the critics’ consensus from Rotten Tomatoes:

“Critics Consensus: Hugh Jackman makes the most of his final outing as Wolverine with a gritty, nuanced performance in a violent but surprisingly thoughtful superhero action film that defies genre conventions.”

As I have said before, I typically like the parts of superhero movies in which the hero—or antihero—struggles with the effects of a superpower on his life far more than the parts in which that power is displayed. I’m just more interested in the triumph of the human spirit over adversity than I am in the typical demonstration of raw aggression, mano-a-mano conflict, and sheer destruction that sells most tickets.

My favorite superhero was actually Kwai Chang Caine, the expatriate Shaolin monk who traveled the Old West with bare feet and a bedroll. Caine never sought out violence and didn’t take the administration of frontier justice as his role in life. Mostly he just wanted to be left alone but would defend the weak and downtrodden—and himself—when required. The TV show had no special effects, no crashing music, no weapons of mass destruction and no wanton demolition derbies.  But it was very satisfying on a moral level.

The character of Logan—AKA Wolverine—is similar in that he just wants to live his life, take care of his old teacher, and score enough medication to get them through another day. He’s not interested in being recognized, much less lionized, and goes out of his way to stay anonymous. Given the nature of storytelling, his mission fails and he is pulled into conflict to protect others more than himself.

I found this part of the movie compelling. Logan’s existential crisis may not be what you and I go through every day but it is interesting. If, however, you are one of those people who watch superhero movies to see:

You should know walking in to Logan that you will see some, but not all, of these things.

Logan is a very violent movie. Very graphically violent. Very personally violent. It’s R rated for good reason. The theater had an usher standing at the door to turn away kids who bought a ticket to The Lego Batman Movie but planned to sneak into Logan instead. No dice, kids. 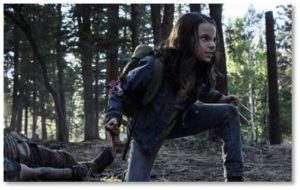 The good news, such as it is, is that the violence is integral to the story. It’s also personal and direct, without the anonymous mass murder and collateral damage that often result from superheroes taking on super villains.

The bad news is that the violence is graphic, bloody, and horrific. The fact that a fair amount of ii is perpetrated by a child makes it worse.

Once upon a time (back in the sixties and earlier) it would have garnered this movie an X rating. Over time, however, moviegoers (and TV watchers) have become inured to levels and types of violence that once would have sent normal people vomiting out of the theater. When it comes to graphic violence, murder, torture, and depravity, we are all the frogs in the pot that have adjusted as the water warmed. We now accept these higher levels as the new normal. This is not a good thing.

In the early days of the X-Men franchise, mutants were powerful people who were feared and despised by folks who lacked strange abilities that defy the laws of physics, biology, meteorology and aerodynamics. But their powers were respected and they held a certain status. In Logan, the mutants have become a despised and dwindling minority. They stand in for every group that has been marginalized and demonized by angry white men:  immigrants, women, people of color, and homosexuals.

As such, Logan echoes some of what is going on in the US today. I doubt that the writers could have anticipated that when they created these scenes. Still, when you imagine a future in which certain groups are exploited by a government that is both unfeeling and oppressive you come up with certain tropes. They resonated with me.

You won’t see any Spandex suits in bright primary colors, magical weapons, sleek vehicles, or high-tech command centers. This movie is gritty in an everyday grunge kind of way, rather than the roaring desert of Max Max: Fury Road. I kept hoping Logan would get the chance to take a shower and put on some clean clothes. 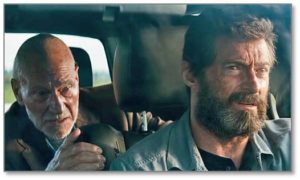 The movie includes several award-worthy performances, most notably Hugh Jackman in the title role and Patrick Stewart as an infirm and power-incontinent Charles Xavier.  Both are worthy of awards that they will never receive.

The Oscars for Best Picture never go to science fiction/fantasy/superhero movies. The only exception occurred in 2003 when The Lord of the Rings: Return of the King won. Ditto, and even more so, for acting performances. Awards considered suitable for science fiction movies are:

That’s it. Don’t even think about awards for superb acting. Not gonna happen. Yet both Hugh Jackman and Patrick Stewart do extraordinary work in this film.

In the end—and we are left in no doubt about that—Logan is both powerful and gripping. It gives us a human story filled with human conflicts, vulnerabilities, doubts, mistakes and small victories. You don’t have to be a mutant, an X-Man or a superhero to empathize with the characters in this movie. With or without superpowers they are just people struggling to survive, to make it to another day, to have a small moment of happiness. And that, in the end, is enough.

NOTE: There is no-post credits Easter egg. Don’t bother waiting for it. There is, however, a pre-movie Easter egg for the next Deadpool movie. Don’t be fooled.

Logan has grossed $88,411,916 after one week on a reported production budget of $97 million. It has also racked up positive critical reviews and Tomatometer scores unheard of for superhero movies:  92% Fresh and 84% Liked.

I recommend Logan for people who like strong stories, can suspend disbelief long enough to accept the concept of mutant humans, and who can take the violence. Those are big qualifiers but the movie is worth seeing.