We watched the Ray Donovan: The Movie last week and, as always, I enjoyed seeing our city on the big screen, so to speak. But, as always, Hollywood took liberties with Boston geography to include photogenic parts of the city even if it made no sense to do so.

Here’s what I found funny: 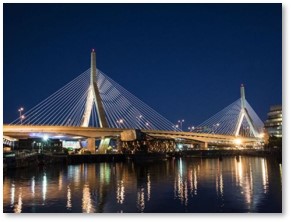 The Zakim Bridge at night

Ray Donovan (Live Schreiber) drives from New York to Boston, which means he’s entering the city from the south. But we see him crossing the Zakim/Bunker Hill Bridge, which means he’s coming in from the north. While this makes no sense geographically, I have to admit, that the Zakim Bridge with its colored lights is a lot more photogenic than anything along the Southeast Expressway.

He drives to Dewey Square to get to South Station. Once there, Ray just pulls over and Parks on the Surface Road—no problem. If you or I did this, we’d have a ticket in no time at all. Ray then gets out and crosses Dewey Square diagonally to reach South Station. He just walks across the intersection—no traffic. You or I would be run over in three steps.

Shortly after that, Ray’s dad, Mickey Donovan (Jon Voigt) embarks on a marathon walk around the city. Just for kicks, I tracked his journey on Google Maps to see how many miles the old geezer logged. 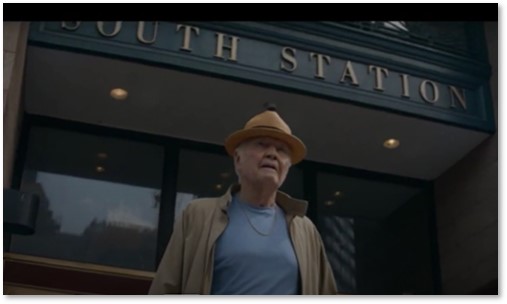 First, he goes from South Station to Emerson Street in South Boston. That comes to 1.9 miles and 36 minutes. Next, we find Mickey walking across the Longfellow Bridge. That’s 2.8 miles and 54 minutes to the Boston end. Presumably, he’s going to Cambridge, although we never find out where or why. When we see Mickey again, he has returned to Emerson Street, for another three miles (from the bridge’s Cambridge end) and another hour.

All told, poor Mick walks 7.7 miles through Boston for two and a half hours for no reason except local color. That’s a Ben Edwards-level walk and a lot more than any Boston By Foot tour will cover.

(If you don’t know anything about Ray Donovan, you can see all this in probably the first 20 minutes of the movie. Pay no attention to the plot. After 82 episodes across seven seasons, you won’t understand what’s going on. They made the movie to tie up ends left loose at the end of Season 7.) 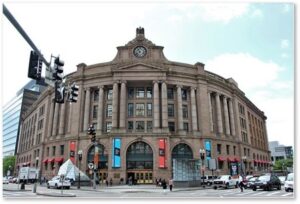 Now, I get the parking-and-crossing segment. No one wants to watch a movie where the protagonist drives around for 30 minutes to find a space and then waits for a long light to get across a traffic-jammed Dewey Square. That’s no fun for anyone. The director has to shrink that timeframe by making it look way easier than it is in real life. I assume they filmed on a Sunday when they could block off all regular traffic.

Mickey’s long walk is something else altogether. That was done just to provide Boston eye-candy but, for us locals, it’s just absurd.

It reminded me of 1973 when we saw The Friends of Eddie Coyle at a Manhattan theater. There’s a scene where poor Eddie (Robert Mitchum) is being driven from Boston to Quincy and he goes through the Sumner Tunnel to get there. I said, “What?” I was probably the only one in the NYC audience who knew you don’t take the tunnel to East Boston to get to Quincy, which is south of the city.

Spenser and the Equalizer

The old Spenser for Hire TV show would do the same things. He was always pulling his car to the curb in some scenic place where parking just doesn’t happen so he can dash off in hot pursuit of someone. Also, he was supposed to live in the old Fire Station at Charles Street on Beacon Hill Flat, given as thanks from a grateful city for something he had done. Yeah, right.

And in The Equalizer 2, Denzel Washington drove his ride-share vehicle across the Moakley Bridge multiple times, probably because it showed off the city’s lights at night. That was more believable, if somewhat silly. 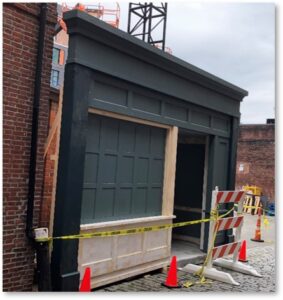 A fake storefront in the Blackstone Block for “Spirited”

I love it when Hollywood comes to town. They make movies and TV shows around the city, building fake facades, adding snow in August, and cleaning up locations that have grown a tad grubby. They also pump money into the economy by hiring local actors and extras, filling hotel rooms, renting locations, and dining in restaurants, as well as giving business to caterers, dry cleaners, and other service companies.

In fact, working for a movie that’s filming in Boston is how the fictional Ray Donovan earns his job as a Hollywood fixer. Yay, Hollywood.

A Time to Snicker

But I reserve the right to snicker when I see them take liberties like this one. Sure, the folks in Baltimore, Birmingham, and Bakersfield won’t know the difference—and that’s fine. But the rest of us can tell south from north and wish poor Mickey Donovan had taken Denzel’s Uber to get wherever he was going.