So, now we know for sure. Via an illegal (and conveniently timed) leak of information, the Internal Revenue Service has informed us of what we already knew. America’s billionaires, the men (and they are all men) who have the the greatest wealth in terms of net worth pay little or nothing in taxes.

List of the Top 25 Richest Americans as of November 2020.

This really annoys me because I’m retired and lost my part-time job as a tour guide to Covid-19 in 2020. Yet I still have to pay taxes at a higher rate than these men do.

The news media, which chase sparkly new things, focus on the bald fact of how little these men pay. They get to use tax breaks, write-offs, long-term capital gains, etc. and it’s all legal but should it be. Yada, yada, yada.

The Dragons of Wealth 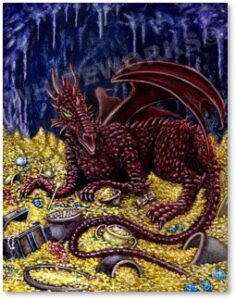 I prefer to focus on something else: what holding on to this mega-wealth, like a dragon crouched over his treasure hoard, says about them as human beings. Here are the five things I think.

Worse, they threaten to leave their state or even the United States if government dares ask them to contribute toward improving life for everyone. If you put money over country, you are not a patriot. You are an expat wealth dragon who is content to let others languish and people with far less than you pay the bills so you don’t have to.

If you put hanging on to outrageous wealth ahead of the wellbeing of the country that has nourished you, supported you, protected you, and given you opportunities, you are not a true American. You cannot turn your back on your country and say you love America.

Kings did not live as well as these men do. Emperors had fewer palaces, maybe one yacht and no cars at all. And while royals could demand groveling from their subjects, today’s billionaires simply buy politicians to do their bidding.

Yet they want more. And more.

The politicians they own vote them tax breaks they don’t need to increase wealth they can’t use, and dump the tax bills they won’t pay onto everyone else. Their lackeys in Congress and the media argue that asking them to pay more constitutes “wealth redistribution.”

Nonsense. The biggest wealth redistribution is demanding that (1) the middle class pay far higher tax rates on far, far less income, (2)  America pays for national programs with borrowed money that foists the debt on our grandchildren, and (3) we replace taxes with “user fees” that are paid by the people who can least afford them.

The wealth redistribution idea is a canard the rich they and their minions use to raise the specter of non-existent socialism. Paying taxes is not socialism. Benefiting from tax breaks subsidized by others who are less fortunate is socialism for the rich. It means distributing wealth from the poorest to the richest instead of the other way around. 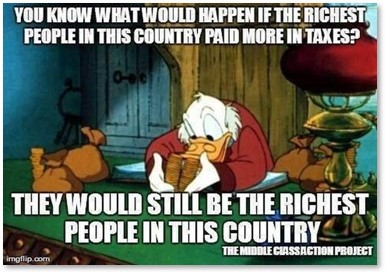 In case you have a mind to weep for the poor little rich kids who are being asked to cough up more, consider this. They could pay those increased taxes without it ever affecting their wealth, their lives, their families, or even their position on the list of richest Americans. 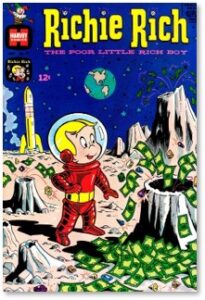 Now Jeff Bezos, who is second on the list with a net worth $187 billion (and who pays a tax rate of 1.2%) will go into space next month. He and his brother have seats on the New Shephard, a six-seater capsule atop a 59-foot rocket produced by Blue Origin, the space company Mr. Bezos founded. Because, when you already have everything, why not?

To be fair, he has decided to auction one of the seats on the sub-orbital flight. Blue Origin will dedicate the proceeds to its private charity, Club for the Future, a non-profit organization with a mission to promote science, math, engineering and technology careers. The bidding will end today and the current high bid stands at $4.8 million.

This auction will actually do some good, so why does the theme to the Muppet Show’s Pigs in Space segment keep running through my head?

The answer may be that greed is one of the Seven Deadly Sins and generosity is a blessing. We are taught from early childhood on to share. Our parents and teachers tell us not to keep nice things to ourselves but to share them with classmates — friends or not — neighbors, siblings, and others. How is it that the richest men in America have forgotten that lesson, one learned in kindergarten?

Perhaps as Jeff Bezos looks down on Planet Earth from his rarefied sub-orbital heights he might have an epiphany. When he realizes the blue marble beneath him is all we have, it might stimulate his generosity to share his wealth with others. One can always hope.