On Congress Street, set amid the Boston Wharf Company’s uniform warehouse buildings and not far from the Seaport’s homogeneous glass boxes you will find a small, ornate structure that looks completely different.

The former Congress Street Fire Station, now the Boston Fire Museum, looks nothing like the rest of the neighborhood. That’s because it was one of the few buildings in the Fort Point Channel area that was not designed by the Boston Wharf Company’s staff architects. It’s also shorter than the surrounding structures, just three stories instead of five or six.

Although the BWC originally owned the land, they sold it to the city to gain protection for the company’s wool warehouses. The fire station housed Engine Companies #38 and #39, which were originally horse-drawn engines, and later became Engine #9 and Ladder 18. 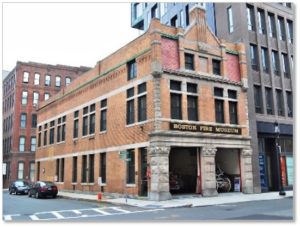 Walking into the station, you may notice the absence of columns or poles on the main fire apparatus floor. Mr. Atwood opened up the first floor by using an ingenious method. A wooden truss-type roof holds up the second floor with a series of steel columns that extend downward.

The six stalls that originally housed the horses that pulled the 19th-century fire apparatus left the firehouse in 1917, after which the city renovated the building. I wonder if the horses went to the city stable on Commercial Street.

In addition to the Congress Street Fire Station, Mr. Atwood designed the Bowditch School (1892) in Jamaica Plain, the ivy-covered Harvard Avenue Fire Station (1891), and several churches in the Roman Catholic Archdiocese of Boston. 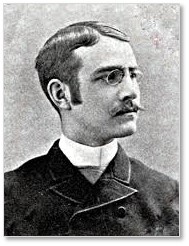 He also completed unfinished buildings from former administrations, including the Horace Mann School for the Deaf (1892) in Allston, and the South Boston grammar school and designed projects for other Boston municipal departments.

A lawyer as well as an architect, Mr. Atwood also served multiple terms as a member of the Massachusetts House of Representatives. In 1895, he was elected for a single term in the 54th Congress of the United States.

Mr. Atwood retired from his architectural profession in 1938 and moved to Wellesley Hills. He died in 1954 and is buried in Jamaica Plain’s Forest Hills Cemetery. 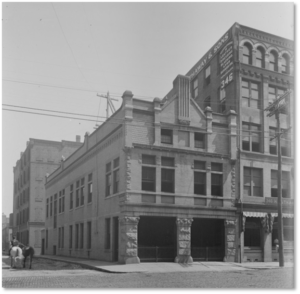 The Congress Street Fire Station operated until 1977. Its firefighters typically worked for nine days straight with one day off to recover, clean up and eat.

Seven of the station’s firefighters died in the line of duty, five of them during the Merrimac Street Fire on February 5, 1898,

The Congress Street Fire Station was added to the National Register of Historic Places in 1987 and was included in the Fort Point Channel Historic District in 2004.

The Boston Sparks Association opened the museum building in 1983 and dedicated it as the Arthur Fiedler Fire Museum. It houses the famous conductor’s extensive collection of fire alarms, antique fire apparatus, firefighting equipment and antique photographs.

The architect who designed the Congress Street Fire Station was himself a member of the United States Congress. I love this synchronicity. Like the two Boston streets with a connection to George Washington and Louis Prang’s double link to Christmas, they bring added interest to Boston’s history. 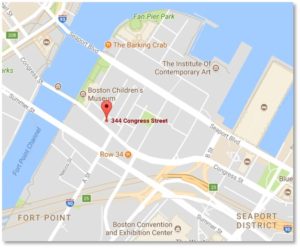 The Fort Point Channel historic neighborhood and the Seaport District with its Harborwalk are both fascinating areas to explore on foot. Ditch the car in one of the surface parking lots, lace up your walking shoes and explore.

If you have kids, combine visits to the nearby Children’s Museum and the Fire Museum for an exciting day.

Do it fast, though because these two Boston areas are changing as we speak. With GE putting its new headquarters on the Fort Point Channel and the Emerald City of glass boxes sprouting up in the Seaport, you can be sure it will look different every time you visit.

I don’t expect the Boston Fire Museum to change, though. It’s chock full of exhibits, equipment the kids can climb on, and volunteer firemen who are eager to explain everything. You may even meet Sparkles the Fire Safety Dog.