While I was reading “The Martian” and writing Tuesday’s post on that book, a couple of news items about Mars surfaced. 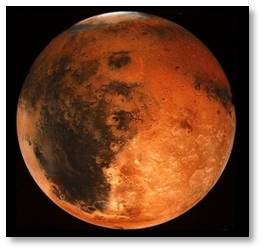 One is an article by Tom McKay on PolicyMic about “NASA Chief Concludes There’s Just One Way We Can Ensure the Survival of Humanity.”

It seems that Charles Bolden, NASA Chief Administrator, believes that humanity needs to become “a multi-planet species” if we’re going to survive indefinitely.”  That means we need to go to Mars because the fourth planet from the sun is the “stepping stone to other solar systems.”

Well, I can’t disagree with him on the need to stop being an “earth-reliant species” for the simple reason that we’re living on this planet as if it’s as disposable and expendable as the trash we throw away, the fossil fuels we burn, and the animals we’re consuming.  If we keep going on like this, we’re going to end up with a planet that looks either like the world Viggo Mortenson walks through in The Road or the garbage dump that Wall-E spends his little robotic life cleaning up. Either way, it’s not a pretty picture.

So I have no quibble about Mr. McKay’s assertion that we should begin taking the steps we need to become a multi-planet species. After all, the human beings in Wall-E bugged out of the mess they had made to inhabit a generation ship full of cruise-line passengers.

The State of Our Space Program

The folks on Ancient Aliens might make the case (OK, they do make the case) that we have been visited by other multi-planet species but we have only archaeological clues that such contact might have taken place.

I support Mr. McKay’s desire to go to Mars and then on to other solar systems. In fact, I’m gobsmacked that the United States has allowed its space program to dwindle. Things have gotten so bad that we pay the Russians to taxi our astronauts up to the space station—all while calling ourselves the greatest nation on earth.  But I do wish he’d been a little more, well, scientific in his assertion. 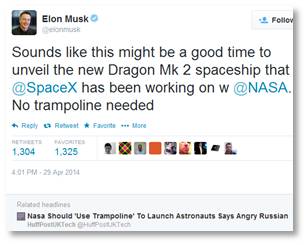 But how do we get to Mars, given that we as a nation have decided that cutting taxes is more important than space exploration?  Having tucked our heads safely under the national wing to stay nice and comfy, we would rather feather our own nest than pay the hefty price tag for such a mission.

The Russians, by the bye, have recently suggested that we use a trampoline to get our astronauts back and forth from the ISS. So we know how dependable they are.

There have actually been two positive and exciting developments.

First, the dynamic Elon Musk, CEO of SpaceX, the company that stepped into a program our government dares not fund, said that no trampoline is needed. He unveiled the @SpaceX Dragon Mk 2 capsule, which is capable of ferrying humans into space.

Way to go Elon! At least one American has the vision to find opportunity where our Congress sees only expense—and make it reality.  It’s even better to know that our astronauts won’t be held hostage to political hostilities.

On the Mars front, Franklin Chang Díaz, an MIT-trained physicist and former NASA astronaut, is developing a prototype rocket engine in a Texas warehouse. This new engine could transport astronauts to Mars in less than six weeks, instead of the six to nine months it would take with the chemical-fueled rockets we use now.  To read the full article, you’ll have to subscribe to Discover magazine, which I have not done.

Getting a Jolt of Energy 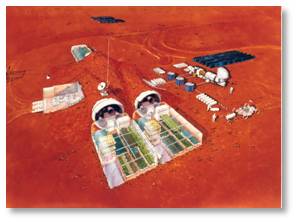 But think of the possibilities. If @FranklinChangD’s company, Ad Astra (To the Stars) and @elonmusk’s company, SpaceX, pick up where @NASA has been forced to stand down, our moribund space program could get a jolt of energy like the one Dr. Frankenstein used to animate his monster. (It’s alive!)

Then we can really think about becoming a multi-planet species instead of an earth-bound species that just wants to be fat, dumb and happy.  In the meantime, we might still turn the earth into an ash heap or a garbage dump but at least we might not have to live in it.

Related Post: Have we lost what it takes to slip the surly bonds of earth?