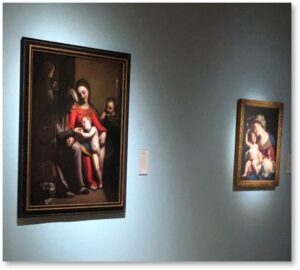 What better way to end a difficult year than with three art exhibitions at three different New England Museums?

Art exhibitions allow me to put aside the cares and concerns of the outside world and instead focus on a collection of beautiful images. For an hour or two, nothing matters but color, composition, lighting, brushstrokes, and an image frozen in time.

Fortunately, New England offers many art museums. We have collections both large and small, general and focused, historical and contemporary. Most open periodic exhibitions of a particular artist’s work or works by many artists around a theme.

This fall offered three marvelous exhibitions, two at art museums and one at a museum I never associated with painting.

We started with the New Bedford Whaling Museum’s show of paintings by the city’s native son, Albert Pinkham Ryder. When I was in college, I encountered Mr. Ryder’s work at the Boston’s Museum of Fine Arts, just a few blocks away. The MFA owns his work, “The Mystery of the Moon” and I was fascinated by the murky image of a woman drifting alone in a boat on a night sea. I wanted to know more.

Fast forward to this exhibit, which provided me with many more of his works to examine at close range. Most appeared equally mysterious because Mr. Ryder worked on them over and over until layers of paint and varnish rendered many of his subjects virtually unrecognizable. It felt like trying to identify an image at the bottom of a pond filled with cloudy, swirling water.

Oddly enough, the exhibit did not include “The Mystery of the Moon,” from the MFA, which disappointed me.

Wishing for a Better Whale 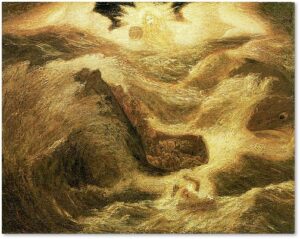 Noah and the Whale

I found the smaller paintings clearer and easier to understand but felt stymied by the larger ones. In particular, I found his “Jonah and the Whale” disappointing. I would have expected a son of New Bedford, New England’s 19th-century, whaling capital, to have a much better understanding of cetacean anatomy.

(If you’re confused, Noah is in the boat, the whale is on the right edge and God is in the cloud.)

The catalog describes Mr. Ryde, a famous artist in his day, as a “prophetic visionary” credited with having influenced the work of later contemporary artists. I only wish his work was less mysterious and more accessible.

By Her Hand: Artemesia Gentileschi and
Women Artists in Italy 1500 -1800

We would have driven to Hartford to see this exhibit at the excellent Wadsworth Athenaeum but, as luck would have it, we were able to piggyback attendance with a family visit over Thanksgiving. More good luck meant we arrived just as a docent began his gallery talk. 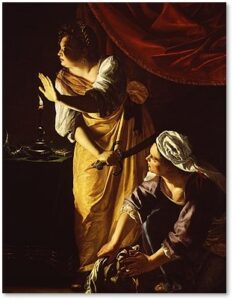 Judith with her Maidservant and the Head of Holofernes

For those unfamiliar with Artemesia Gentileschi, she was a 17th-century Baroque painter who lived in Rome, Florence, Naples, and Venice. Trained by her father, the painter Orazio Gentileschi, she became a popular and successful artist, as well as the first woman to be elected a member of the Florentine Accademia delle Art del Disegno (Academy of the Arts of Drawing).”

The “By Her Hand” exhibit hung several of her works, along with those of other prominent women artists of the day: Sofonisba Anguissola, Rosalba Carriera, and 22 others.

I consider her large work of “Judith with Her Maidservant and the Head of Holofernes,” the highlight of the show. It disappointed me, however, that the exhibition did not include any version of her marvelous “Susannah and the Elders.”

The docent gave an excellent gallery talks and, afterwards, several of us engaged him in conversation about the artists and their work. We discussed to what degree an artist’s life informs his or her work. I see this clearly in the work of Signorina Gentileschi, whose paintings of “bold and powerful women” were informed by her experiences as a 16th-century Roman and Florentine woman. 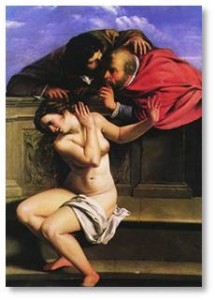 In 1611, her father’s colleague Agostino Tassi, raped her. When she reported the rape, The Roman magistrates arrested Signorina Gentileschi and tortured her to force her to recant her accusation. She refused, despite cords being knotted and twisted around her fingers. She went on to participate in Tassi’s trial, a most unfeminine thing for her to do for the time. Signorina. Gentilesci went on to become a popular and successful painter, a wife, and a mother of five children.

I see the anger that incident caused displayed in her work, along with a cynical attitude toward the men of her day. Her paintings are strong, as are the women she depicts, who are often heroines from the Bible. The docent remained to be convinced. Each to his or her own opinion.

This marvelous exhibit also introduced me to artists I had never known and works of artists I had heard of but never before seen exhibited. An eye-opening exhibition, this show just might inspire other museum curators to pay more attention to female artists.

The last exhibition we visited also turned out to be the smallest, yet also the most crowded. We needed a reservation to see this show at Boston’s Isabella Stewart Gardner Museum and, even so, there was a line to get into the single room that holds it.

Why? To quote the catalog:

“Between 1551 and 1562, Titian created a series of monumental paintings for King Philip II of Spain. Celebrated as landmarks of western painting, the six poesie — or painted poetries — envision epic stories from classical Antiquity. Titian reimagined these familiar tales and used his modern style of painting to shape the future of western art. For the first time in over four centuries, Isabella Stewart Gardner’s fully restored Rape of Europa is reunited with its five illustrious companions in the exhibition’s finale and its only American venue on an international tour including to the National Gallery, London and the Museo del Prado, Madrid.”

Who wouldn’t want to see in one place six masterpieces reunited after four centuries? Especially when they were painted for a king? You can go from one to another and then stand back to see the overall impact. What an opportunity! This exhibition sure beat visiting several museums in different countries.

It concludes with portraits of King Philip II (Titian) and his wife, Mary Tudor.

Ironically, the Poesie presented women in exactly the opposite way to what we saw in “By Her Hand” at the Wadsworth Athenaeum. The female subjects of these paintings exist in relation to men and are, at best, ignored by their male companions. At worse, they suffer sexual violence at their hands. Only one, the Danaë, depicts two women with no male presence.

Although the works are undeniable masterpieces, I found myself disturbed by their images. While we cannot judge the culture of the Spanish royal court of 400 years ago, we also cannot overlook how far we have come since then. We are children of our time, people of the 21st century, and, at least for me, feminists in outlook.

Although the title of the show is “Women, Myth and Power,” these women have no power. Titian’s paintings display them naked, vulnerable, and victimized. 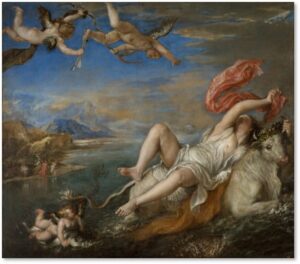 The Rape of Europa

Unlike Philip II, we no longer see such images of rape and other violence against women as acceptable parts of a male-dominated culture. I can only imagine what Artemesia Gentileschi would have thought of these collected paintings.

Would she have shown Europa actively resisting Zeus’s bull instead of being passively carried away while her women wail helplessly on the far shore? Would she have depicted a clothed Venus standing firm and forcefully keeping Acteon in place instead of naked and reclining off balance? I doubt Ms. Gentileschi would have painted the story of Diana and Callisto at all.

Three Exhibits to End the Year

There you have it: three fascinating art exhibits that not only expanded my knowledge and experience but caused me to think and wonder. If I can find three more of such power and importance in 2022, it will make the coming year something to look forward to.