According to Paul Kiernan in Monday’s Wall Street Journal, “Workers Claim a Shrinking Slice of the Pie.” This presents a puzzle to economists for several reasons: 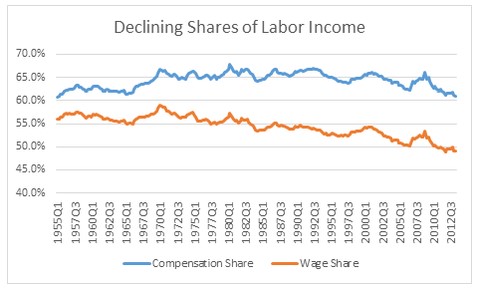 History tells us that when these three conditions occur, workers gain leverage they use to get a bigger slice of the pie. Companies must raise wages to attract and retain the workers they need, even if it means shrinking their profit margins. In fact, the worker shortage has gotten so tight that we hear stories of new employees “ghosting” companies. Candidates drop out of the interview process, new hires never report to the job, or even walk away once they have started. In a tight job market, no one would dare to behave this way.

Given all that, why have employee pay and benefits fallen to 52.7% of gross domestic income in Q3 2018?  Why has this measurement declined for the fourth straight quarter? (Bureau of Economic Analysis) Could it be because companies are not profitable and can’t afford to give raises? On the contrary: corporate profits as a share of income have risen to near record highs while the share of compensation for workers is grazing a 50-year low.

In the last part of the nineties, the last time labor market reached full employment, labor’s share of the nation’s income increased, closing the productivity wage gap by one third. In his WSJ article, Mr. Kiernan notes that

“If workers were commanding as much of domestic income as they did in 2001, they’d have nearly $800 billion more, or $5,100 per employed American.”

For a lot of employed Americans, that $5,100 would make a huge difference. 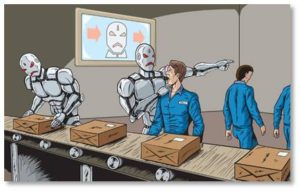 But why? What causes this drain of wages from hard-working Americans? Experts have floated several possible explanations:

Jared Bernstein, in his New York Times article, “Why Labor’s Share of Income is Falling,” dug deeper into Reason #1—declining bargaining power. He notes that, given the decline in union membership, full employment is now the only way workers get bargaining power.

By parsing the language of economics and analyzing the reasons in real English, we can get a better grasp of what’s going on.

With unions de-fanged, workers lost the power to bargain for higher wages in a unified and organized fashion. Strikes also hold less of a threat when companies can respond by shutting down and moving to another country, outsourcing the work to contractors, or automating labor. If you can be replaced by a worker in a far-off country who does your job for a fraction of what you’re being paid, you have no power. 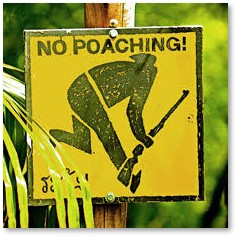 Non-compete agreements and no-poaching clauses, while perfectly legal, freeze workers i place with the implied threat of legal action. I know a man who was laid off from Company A and got a new job at Company D. He refused to publicize his new job because he feared being sued by Company A, even though they had laid him off.

Think about not being able to leverage your education, training, and experience to land a new job because that company competes with your old one. Think about a company having the power to limit the futures of its employees after they leave so they can’t earn a decent living.

The United States once “owned” whole industries, from automobiles and appliances to movies. Entrepreneurs had invented not only the technology or the product but developed the market. Other countries could only copy what America had innovated.

That is no longer true. We don’t have a monopoly on new products. Many companies, especially in manufacturing, also no longer respect quality, much less knowledge and experience. Instead, they chase cheap labor, moving jobs from the U.S. to Mexico, Mexico, to China, China to Vietnam, etc. Remember, those new workers aren’t stealing jobs from Americans. Instead, American executives are shipping the jobs to foreign workers.

Almost every day we hear about a new robot that can perform a job that humans once did. Cooking food, laying bricks, caring for the elderly, moving inventory, and welding cars are all jobs that robots now do. Customer use kiosks, self-checkout, and other automation systems that replaced people–and do it without a second thought.

I once had a grunt-work college job that was performed by a floor full of employees pushing paper. Now probably one person with a computer–or even an algorithm–gets it done. Progress moves on. Sometimes it creates new jobs, but seldom for the same people it eliminated. Workers have no power when a robot or an application can replace them.

Also, the bigger these companies get, they closer they come to achieving monopsony, in which they get to make the rules. Workers have no power and nowhere else to go. 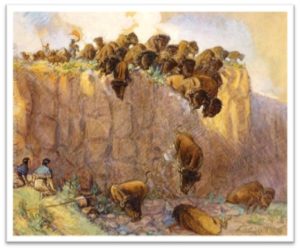 Driving Buffalo Over the Cliff by Charles Marion Russell

Can this trend turn around? It would take a sea change in how companies view their responsibility. As long as they concern themselves only with profits and don ‘t worry about their contribution to the American economy, the answer would be a big, fat No.

I think they will charge blindly ahead like bison off a cliff, cutting expenses and chalking up their quarterly profits, until they run out of people who can afford to buy their products.

By then, it will be too late.