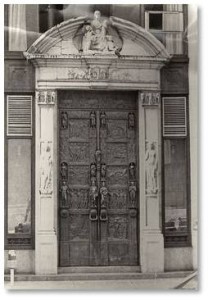 The Salada Tea Doors are not exactly hidden—hundreds of people go past them every day—but most pedestrians just walk on by. Even though a plaque on the building explains what they are and who made them, and the doors themselves are beautiful, folks in a hurry don’t stop and take a look. Granted, it is more difficult to see the doors when they are open during the workday but when they are closed after business hours, their marvelous sculptures are on full display.

I find it ironic that tourists from Boston flock to Florence, Italy, to see the cast-bronze doors by Lorenzo Ghiberti of the Baptistry at the Duomo, yet don’t know about their city’s own bas-relief gems. This is sad because the Tea Doors are well worth a close inspection.

In 1917 the 10-story masonry building at 330 Stuart Street, designed by Densmore and LeClear, housed the headquarters of the Salada Tea Company in the United States. Salada operated there for more than 40 years and the building also served as a cultural center that held a significant collection of Asian art.

The Salada Company’s founder, Peter C. Larkin, commissioned the doors in 1926 to celebrate the cultivation of tea in Ceylon (now Sri Lanka) as well as the tea trade. Mr.Larkin invented the modern tea bag by putting loose tea into foil pouches for greater freshness and a consistent flavor. He named the company for a Ceylonese tea garden.

These huge bronze doors, which weigh approximately two tons, hold ten panels in bas-relief, five on each side. They depict every step of the process of growing, harvesting, and shipping tea in Ceylon. Two vertical rows of small figures in high relief flank the panels. Designs of tea leaves and tea berries decorate the frames between the panels. 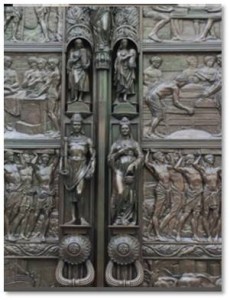 English sculptor Henry Wilson who also created the bas-relief west doors of the Cathedral of St. John the Divine in New York City, designed the doors. They were cast by the Gorham Company of Providence, RI.

The Doorframe: Above the marble frame from which the doors hang sits a figure of Demeter, the Greek goddess of grain and the harvest, in the center of a broken pediment. Children support her on either side. Pilasters on the sides of the frame hold full-length, high-relief figures dressed in Asian costumes. 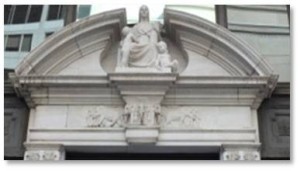 On the left stands Persephone, daughter of Zeus and Demeter and the Greek goddess of spring growth. On the right we find Triptolemus, a Greek man who was charged by Demeter with teaching the craft of agriculture to the world.

Both figures are depicted as female, however, which is a puzzle. Either the sculptor exercised some creative license, or the.description on the plaque is incorrect.

Elephant heads project from the capitals of the pilasters and above them march elephants in a frieze. These carvings were produced by M. Caesar Caira, who was a special assistant to Henry Wilson on the project.

The doorway was installed in 1927, a period of time when few people had traveled to or knew much about a far-away country such as Ceylon. It offered Boston’s residents a view into an exotic land, and fascinating animals, along with information about how the tea in their pots came to be there. I’m sure some of the ladies also enjoyed the public and completely legal depictions of muscled men in loin cloths. 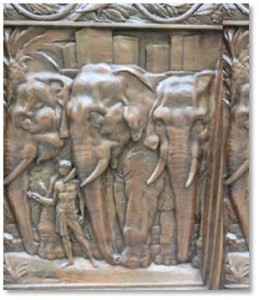 The doors received a distinguished silver medal at the 1927 Paris Salon—a prestigious honor—but they have since fallen into obscurity and don’t receive the attention they deserve.

330 Stuart Street has been sold several times and it now houses the Grill 23 Restaurant and Bar. During the building’s latest renovation, the doors were stored away and then re-hung. Today the tea doors are in wonderful condition, pristine and shining. They serve as a tribute to all involved in creating and preserving them.

Directions to the Salada Tea Doors 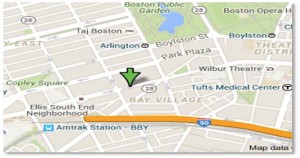 The Tea Doors they face a public street, so there is no charge to see them.  330 Stuart Street is on the south side between Arlington and Berkley streets.

Try to see the doors when they are closed, during the weekend and after business hours. Because the doors face north, they lie in shadow some of the time, which diminishes the effect of the sculpted panels. Try to get there when the sun is bright.