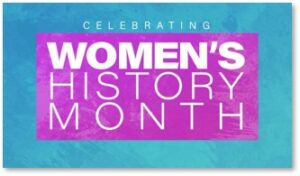 March is Women’s History Month and, while acknowledging history is important, I’m more interested in how we’re doing right now.

Are women’s lives improving? Do women have more opportunities? Are we safer? Can we get through out work day without men’s unwanted attentions? Does the justice system deliver real, actual justice for women?

A Mixed Scorecard for Women’s Progress 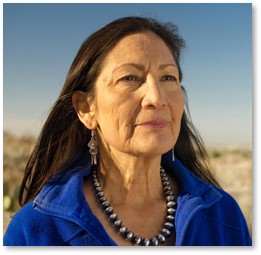 We have a mixed scorecard.

On the plus side, the U.S. has the country’s first female Vice President and there are many women in the Cabinet, including the first female Secretary of the Interior. Female judges sit on the bench in American courts of all sizes and importance. Women orbit Earth in the International Space Station. We have female doctors, lawyers, scientists, journalists, judges, editors, and CEOs.

The countries that had the best response to Covid-19 and the fewest deaths are the countries with women in charge. The people fighting on the front lines for freedom in their countries, or the return of a democratic government, to argue for safety and protection or the downfall of a tyrant are often women. Google “Women protest in…” and you get a list that includes India, Sudan, Chile, Africa, France, Poland, and Mexico.

On the negative side, women are still dealing with the same old, same old. Consider that 21 years into the 21st century:

And that’s just a quick news sample. Like I said, same old, same old. Sometimes it feels like one step forward and two steps back. Saudi Arabia released from prison a prominent women’s rights activist, whom they had jailed in 2018. One step forward. But Aung San Suu Kyi was ousted from power as the de facto head of Myanmar’s government, arrested once again by the military junta, and returned to prison. Two steps back. 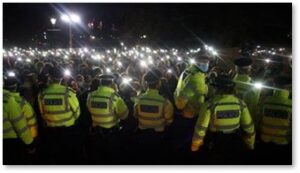 In London, telling women to stay inside for their own safety penalizes women instead of the killer. It makes more sense for men, the perpetrators of violence, to have curfews while women walk the streets freely and safely.

Wait, was that a step too far? Really? Think about it.

In other relevant news, Beth Moore, a prominent Evangelical speaker and author, left the Southern Baptist Convention this month, saying, “This is not who I am.”

In a blog post, she attributed her decision to “attitudes among some key Christian leaders that smacked of misogyny, objectification and astonishing disesteem of women.” Back in 2019 Ms. Moore Tweeted that she would be preaching from the pulpit—although she refrained from using the word “preach”—on misogyny and sexual abuse. The debate among Evangelical men immediately turned away from the uncomfortable subject of clerical abuse to the safer one of whether women were allowed to preach to men.

The Southern Baptist denomination has a doctrinal statement, the Baptist Faith and Message, that reads, “the office of pastor is limited to men as qualified by Scripture.” That scripture clearly ignores the apocryphal gospels, such as the Gospel of Mary, that were not discovered until long after the Council of Nicea. Those books relate that women and men had equal authority in early Christianity.

Return of the E.R.A.

The long-dormant Equal Rights Amendment may be back in play. This was an issue when I was in my twenties and I took pleasure in voting out Rep. Emmanuel Celler, the man who stood in the doorway to proudly block the E.R.A. from being ratified. 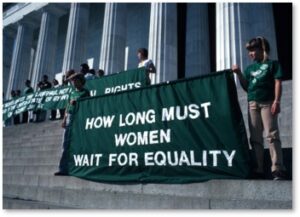 If you’re unfamiliar with it, The E.R.A. is three sentences long, and the key one is the first: “Equality of rights under the law shall not be denied or abridged by the United States or by any State on account of sex.” The other two are about putting it into effect. That seems pretty anodyne to many of us but the E.R.A. has never been ratified.

Which leads me, as always, to the question, “What does it take to change things?” The answer is simple, but not easy.

Women have to be in charge.

Just like in those countries that responded well to Covid-19, putting women in charge makes a difference. Men and women think differently, are socialized differently, have different priorities, and take different approaches to management. Men tend to make unilateral decisions while women prefer to seek consensus. These could just be alternative—and even complementary—approaches. Unfortunately, men often judge women’s styles as not just different but lesser, weaker, not fully in charge and incapable of leadership.

What’s that you say? You’re a man and you’re not like that? Congratulations. I’m glad to hear it. That means we’re continuing to make progress.

But even as you protest that you are willing to see, accept, and promote women, you have to recognize that most men are not. You may not see it because much of the misogyny, hatred, discrimination, and diminution of women is invisible to men. But it’s there, take my word for it. Take any woman’s word for it. And it’s everywhere.

I hope that next year’s observance of Women’s History Month will be marked by fewer examples of the ways in which women are hated, discounted, demeaned, abused and outright murdered than this one. Hope springs eternal, especially in the Spring.