Just in case you thought those UAP sightings I wrote about recently were a figment of my imagination or a temporary phenomenon, here are more. I have noted that the only thing unusual about sightings of Unidentified Aerial Phenomena (UAP) is that they are being reported in the mainstream media for the first time.

That trend continues, perhaps because UFO sightings have increased by 15% during the pandemic. The currently popular explanation is that we have spent more time at home and thus have more time to look up at the sky. Also, light pollution diminished, making objects in the sky more visible.

Many of the sightings have been explained as normal things most people have never noticed before: birds, bats, satellites, planes, drones and the Goodyear Blimp. I will accept these facile explanations because they probably account for a certain percentage of reports. On the other hand… 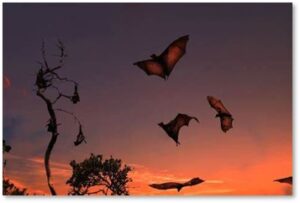 My husband and I have gone for evening walks in the summer during which we saw, and heard, lots of bats. I never mistook one for an aircraft of any kind. Bats are small and they dart around quickly and erratically as they hunt insets. They make a clicking sound that you can hear if the neighborhood is quiet. Many different varieties of birds also visited and lived in the pond behind our previous house. Again, we knew they were birds—and what kind.

In my experience, though, most people are fairly oblivious to things that go on right around them, much less in the sky. I call it living in a state of obliviosity. Nevertheless, claims of UFO sightings increased by a thousand last year compared to 2019. Some 7,200+ sightings were reported in 2020 and they nearly doubled in certain places, notably New York. That’s a lot of birds and bats. 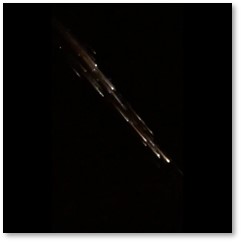 Two celestial displays have had perfectly rational explanations. One was the fragment of Asteroid GW4 that exploded over Florida on April 12. The other was the debris from a Space X rocket that failed to execute a de-orbit burn. When it fell into the atmosphere at the end of March, it lit up the sky over Portland, WA. Many folks on the ground filmed these events and the press reported on them.

Such scientific events certainly don’t account for all UAP sightings. Looking behind the bird/bat/balloon explanations, we can intuit that UAPs have been up there all the time but we just haven’t paid enough attention or been able to see them clearly. Which is exactly what UFO/UAP trackers have been saying all along. 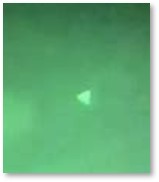 Yesterday, a leaked video from the Navy—confirmed by the Pentagon—showed a series of mysterious sightings over U.S. Navy warships in California. The video shows three triangular objects hovering only 700 feet above the ship.

They were photographed on March 4th, 2019, by an F-18 weapons systems officer (WSO) seated behind the pilot. He used his iPhone to capture images of three different objects he encountered in the same airspace.

At 3:02 p.m. the WSO photographed an odd shaped object. Another photo, taken close to the same time, was first posted to twitter on May 11, 2020, then again on social media six months later. 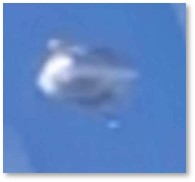 The sighting was reported on both Fox News and the TODAY Show. Fox News also showed videos of the crafts, dubbed “the metallic blimp” and “the acorn,” that were also recorded on video.

I find it refreshing that some of these reports are getting more visibility from news outlets that reach millions of people. Either the media or the government may be softening us up for the big report that’s due to come out in June.

When I survey all of this activity I find three points of interest.

What happens next? Your guess is as good as mine. The weather is warming up, which offers a good reason to go outside and look up at the night sky. You will see the moon and planets, you may see Betelgeuse dimming in the constellation Orion, and you might catch the International Space Station cruising along. Or you may see something else entirely. Something that doesn’t fit into our neat scientific categories.

These folks in Utica, New York, certainly did. Watch their video of five bright lights proceeding silently across the sky. No airplane noise; no running lights. The truth may not be out there but something certainly is. See for yourself.