It has been just over four months since Dad’s move to an assisted-living community. Our story has a happy ending, but the road we traveled to get there was a bumpy one.  Dad did not want to move. We could no longer provide the care and support he needed to live independently. We had a three-month stand-off before he agreed to do it. 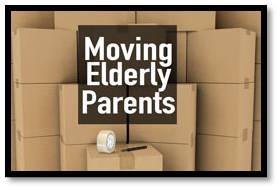 Moving a parent who does not want to move is one of the most difficult things a child will face. It is not the natural order of things for adult children to dictate what their parents must do. Yet that is exactly where I found myself; giving my dad the ultimatum of moving or remaining in his home without any further assistance from me.

I believe my exact words were “I know I can’t make you move. In fact, you can stay here until you take your last breath, but I will not be back.”  I have never spoken to my dad that way and it devastated me.

It was my own form of tough love. Having tried everything else I had run out of options, patience and time.I was afraid he would die there and at the same time realized that was exactly what he wanted. Aging in place—the idea of remaining in your home while others care for you—was once the standard for elderly care.

Our grandparents lived in their homes until they left this earth. There was family nearby, literally streets away, to take care of all the big and little things they needed. In my husband’s family when an elderly spouse died the widow or widower moved in with someone else. Doctors made house calls, children did not move out of state, and assisted-living communities were a gleam in the developer’s eye.

If alternative care was mandated there was only one other option—a nursing home.  My dad equated assisted living with nursing homes.  You moved into one and you died.  Although his point of reference was twenty-five years behind the times he was determined not to go. He was afraid.

Once I understood his fears, our conversations became easier as we explored alternative living options. He wanted to maintain his independence and I wanted that too, so we looked at three local communities. They all had waiting lists, which helped us plan and gave Dad the time he needed to adjust.

Dad’s new apartment is one mile from his old home. It is actually a 55-and-older retirement community with independent living ownership and rental options. Assisted living includes private apartments with progressive assistance options and a specialized program for memory impairment. It is set in the historic district of town, and offers so many programs it’s clear no one has retired from life. They have simply moved to a new community to enjoy life without the burden of managing it. 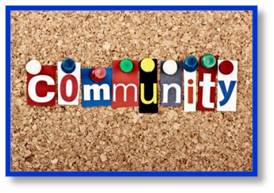 Here they focus on dignity and well-being, celebrating the lives of all the residents. Robust programs include exercise (there is a pool and health club), a community garden, excursions, movie night, craft projects and fabulous food.  When I was there last month they were hosting a 50’s sock hop and had a tent in the back for an upcoming anniversary celebration. There is a well-stocked library with current magazines and the daily newspapers. A shuttle bus takes them anywhere they want to go in the local area.

But most of all there is fellowship and conversation, two essential components for quality of life. Dad knows many of the residents, never realizing they lived there! They are part of his church community and Friday-night supper group.  He was warmly welcomed and immediately comfortable in his surroundings.

An on-site team of wellness coordinators sponsors workshops on meditation, yoga and Tai Chi. Dad wears a life-alert button, and on his refrigerator is a life information packet with emergency contact numbers. This alone has lifted a huge burden from my shoulders.

My father, who will turn 95 next month, was recently awarded the Chevalier of the French Legion of Honor for his service during World War II. The ceremony was hosted in the gathering room and attended by the French Consul of Boston, who presented the award. The event was attended by the residents and included local media coverage.  Pretty amazing for a man who did not want to move! 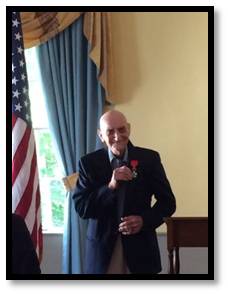 Dad with his Chevalier of the French Legion of Honor award

Much of what Dad feared in a move never happened and much of what he did want stayed the same.

What changed is his social life. He is no longer alone. He joins friends in a dining room that offers restaurant-quality food. They have a social hour before dinner and coffee in the gathering room each morning and you can usually find him there, sharing stories and conversation. On Sundays they have a brunch that includes Bloody Marys and mimosas and a meal that will keep you fed for the rest of the day.  The staff is wonderful.

Dad is enjoying the change, despite the long and painful journey we made to get to this point. I have the reassurance of knowing there is an immediate response team in place and feel immense relief as well as joy in all that we have accomplished. We are both happy and both of us have peace of mind.