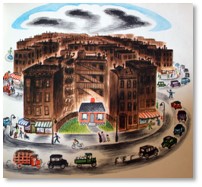 Boston has its own version of Virginia Lee Burton’s children’s book, “The Little House.” In Ms. Burton’s book, a growing city engulfs and overwhelms a simple country cottage, which then becomes overshadowed by tall buildings. I often think of it when I walk by 16 Beacon Street.

In Boston, the Chester Harding House huddles between its two larger and taller neighbors: The Congregational House on the left and the Claflin Building on the right. It, too, went up when Boston was much smaller and the area was rural. 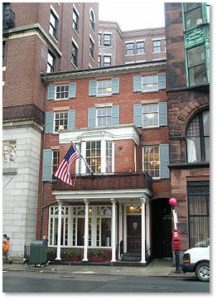 In 1790, Boston had a population of about 18,000, only about 2,000 more people than in the previous 50 years. That same year, Massachusetts Magazine described Beacon Hill as a “rural hamlet.” Distant from the town of Boston itself, Beacon Street owed much of its rural nature to the proximity of Boston Common, then a cow pasture with ponds where boys hunted frogs that were said to be a foot long.

In the next 20 years, however, the town’s population almost doubled to 34,000. Development expanded from the established neighborhoods southward into “genteel” areas now occupied by the Financial District and to the west along Beacon Street. The biggest change came in 1795, however, when the Legislature chose a plot of land on Beacon Hill for the new State House. Designed by Charles Bulfinch, the stately government building sparking a major upgrade in the neighborhood.

In 1808, when many of the civic buildings on Beacon and Park streets had grown dilapidated, real-estate developer Thomas Fletcher erected a Federal-style private home across the street from the new State House . Eighteen years later, portraitist Chester Harding purchased the home and lived there until 1830.

Although less well-known today than Gilbert Stuart, Chester Harding possessed a notable reputation in his own day. Mr. Stuart even once complained that “Harding Fever” overshadowed his own work.

Chester Harding (September 1, 1792 – April 1, 1866) came to his artistic fame the hard way. Born in Conway, MA, he was the fourth of 12 children. Their father, an unsuccessful inventor, found it difficult to provide for his large and ever-expanding family so young Chester lived for a while with an aunt. The family hired him out at the age of 12 to bring in money. Two years later, his father moved the family to Monroe County, NY. 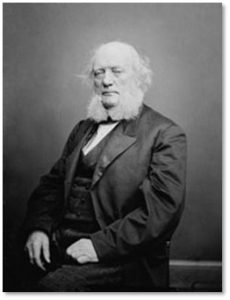 There, Mr. Harding married and tried a variety of trades—including drum-making, cabinetry, and tavern-keeping—before being introduced to portraiture in 1818 by an itinerant artist named Nelson. In search of business, Mr. Harding moved around to Kentucky, Missouri, Philadelphia and Washington DC. Largely self-taught, he was influenced by the portraitist Matthew Jouett and studied for two years at the Pennsylvania Academy of Fine Arts.

In 1823, Chester Harding spent six years in Boston where leaders promoted him as “an untaught primitive from the frontier” and received more commissions than he could handle. He traveled to London that same year, where he painted aristocrats and members of the royal family. He purchased the house at 16 Beacon Street when he returned to Boston after a British financial panic destroyed his business there.

Experts estimate that, In the course of his career, Mr. Harding painted over 1,000 portraits. The Boston Museum of Fine Arts holds 17 of them in its collection, among them a self-portrait, but none are currently on view. The Boston Athenaeum, two doors down on Beacon Street, owns six Harding portraits, including those of John Marshall and Daniel Webster. You can see Mr. Harding’s portrait of Rev. Thaddeus Mason Harris on the first floor, which is open to the public None of these works looks remotely primitive.

Dr. Henry Clay Angell (1829 – 1911), an ophthalmologist and art collector, purchased the house in 1830 when Chester Harding moved to Springfield, MA. In the latter part of the 19th Century, this part of Beacon Hill changed again, this time from residential to commercial.

In 1894, Martha B. Angell donated the house to the American Unitarian Association, which later merged with the Universalist Church of America. Some of the subsequent owners made additions and changes to the building’s façade but the original, flat Federalist façade remains behind the present box bay with bay window. 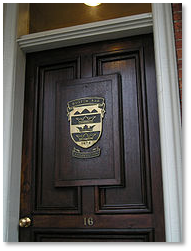 The Boston Bar Association purchased the building in 1962 and moved its headquarters there from 35 Court Street. The Chester Harding House remainsl the headquarters of the BBA and its logo decorates the front door. In 1965 the house was declared a U.S. National Historic Landmark and it is on the National Register of Historic Places. A copper plaque marks the left side of the building.

Two larger structures now bracket the Chester Harding House. The six-story Claflin Building went up as a commercial structure in 1873. It has since been converted to luxury condominiums, however, returning the spot to residential use. The eight-story Congregational House, designed by Shepley, Rutan and Coolidge, was erected in 1998.

Home to an artist, a collector, two religious denominations and a legal organization, the little house at 16 Beacon Street persists.